It appears as though Colombia has been lost.....

http://news.bbc.co.uk/1/hi/world/americas/2716369.stm
He had bought a large map representing the sea,
Without the least vestige of land:
And the crew were much pleased when they found it to be
A map they could all understand.
B

All humour aside,
I am afraid a part of me is wondering if there will be any other cause apart from

I truly hope not. Rest in peace the crew of STS-107 "Colombia"
He had bought a large map representing the sea,
Without the least vestige of land:
And the crew were much pleased when they found it to be
A map they could all understand.
G

Saddened by this, and how ironic with all the shiite that is going on in the world.  I have a (healthy) interest in space exploration, and this is only going to serve to slow down or completely halt exploring the other planets, Mars in particular.  Unmanned missions will now take on a new meaning.

God rest those brave souls who departed this world around 1415hrs GMT.

I am too saddened

Gunny the only reason you keen on researching Mars is so you can get back to your own planet.

Back on thread, how long will it be before it is blamed on a lone Iraqi sniper firing an old SMLE from a rooftop in Bagdad
<a href="http://www.mybannermaker.com" target="_blank"><img src="http://i.imgur.com/O7o54.png" alt='Create your own banner at mybannermaker.com!' border=0 /></a><br>
G

Mighty,  We mean you no harm, take me to your leader.

Is Hussein Owner of Crashed UFO?

He had bought a large map representing the sea,
Without the least vestige of land:
And the crew were much pleased when they found it to be
A map they could all understand.
B

it wont be long till bush declaires that saddam blew it up, it will give them another excure to go to war!!

Moderator
Kit Reviewer
There is the small matter of the astronauts currently sitting up in the International Space Centre who will need re-provisioning/replacing at some point.  Last time ('86) there was a gap of several years until the next shuttle mission, I don't think they can afford such a long gap now - Pity the next lot who get picked to go up!
"..there has seldom if ever been a shortage of eager young males prepared to kill and die to preserve the security, comfort and prejudices of their elders, and what you call heroism is just an expression of this simple fact; there is never a scarcity of idiots."

From BBC:
US space agency (Nasa) officials have condemned attempts to sell debris from the space shuttle Columbia on the internet.
Hours after the ill-fated shuttle broke up, killing all seven astronauts on board, debris purporting to be from the wreckage started appearing on net auction sites such as eBay.

"People should not be collecting that at all," said Nasa spokesman Bruce Buckingham.

"We live in an evil world and there are people that will do those types of things," he added.

Nasa has stressed that any shuttle debris is the property of the US Government and anyone caught removing it could face charges of theft and interference in a federal investigation.

Local police has been attempting to cordon off areas where debris has come to rest.

Wreckage has been found in more than 1,200 spots across eastern Texas and western Louisiana.

US auction site eBay has been removing such items as soon as they appear and has made it clear that such sales are strictly prohibited.

Legitimate memorabilia from past space missions have been soaring in value on eBay.

Collectibles marking the doomed space shuttle have also appeared on internet sites as people attempt to cash in on the disaster.

Some 1,525 items for sale came up on eBay on Monday morning when BBC News Online searched for items with the STS-107, the Nasa number for the doomed mission.

Most of the items seemed to be patches, mission programmes and photos of the crew.

i didnt think it would be long until they started doing things like that, but never expected it to be so soon after the crash

Got off a weekend to hear about this. Someone needs to take those ebay guys off to one side and have a quiet word.

Rest in peace columbia and crew.

One day son you will drive one of these for Her Majesty, only slighty bigger, british, made of metal and less reliable.
D

It now seems that NASA was aware of several areas of damage to the shuttle shortly after take off.  As there are one or two spares and a few dozen pilots and crew on stand-by, why didn't they send another up to transfer the crew?

OK it may have taken a couple of weeks, but they could have hung around up there either on board or with the space station.  Apart from having the makings of a good film, it would have also saved their lives.

It could only be that by doing so would have meant they would have lost a shuttle and they considered it worth the risk to try and bring it down.  Now I know I am being cynical, but can anyone think of a better explanation.

RIP Columbia Crew.  I guess they knew they were pawns on the chess board of life!
Winning friends and influencing people the world over.
G

Scribbler, totally agree with you.  I wonder if they were working on those percentage risks (risk assessment)?  "It has a 82% chance of making it back, okay, lets chance it".   It seems so stupid that after witnessing the damage caused by the take-off, that no one actually went outside to look and assess the damage.  Even the slightest tear or hole would allow heat to enter the hull and quickly raise the temperature to un-sustainable temperatures.   All seems a waster of 7 lives and a billion dollar piece of hardware.  More lessons to be learnt ?
H

A few thoughts.
don't know how much air they had left in the tanks, would they have lasted a fortnight?
Also, they seem to have had probs with the tiles before, why no SOP's in the event of tile damage with a handy tile replacement kit?
NASA says that tile damage on launch would have been unsortable in space anyway. If they knew about this earlier, and therefore knew what was likely to happen, how do you break this news to the crew, their families and the media?
Also, they seem to be very much resigning themselves to the "there was nothing that could be done" way of thinking. Bit of an insult to the resourcefullness of your average NASA astroperson.
Nice And Safe Attitude? I wonder......
Yabbadabbadoo!
E

Anyone else reminded of the opening sequence of the Six Million Man.

I guess that even if they did know there were problems it's not as if they had a patching kit aboard to go out and fix it up. It was probably a question of Rock and Hard place.

Good on em for having a pop though.

More of a worry is though is the idea that they skimped on the maintenance generally over the last few years. Almost as bad as not ordering enough sand coloured paint when you know a desert war is coming!
G

Slowly putting the Colombia back together: 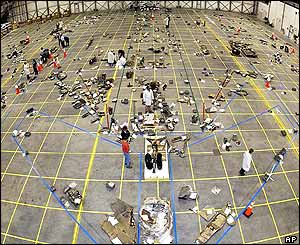