Watching that now-vintage but still magisterial World at War series, I was struck by the role of the horse in the episode covering the Nazi offensive on Soviet Russia- Op Barbarossa

For the campaign against the Soviet Union, the Germans allotted almost 150 divisions containing a total of about three million men. Among those units were 19 panzer divisions, and in total the Barbarossa force had about 3,000 tanks, 7,000 artillery pieces, and 2,500 aircraft. It was in effect the largest and most powerful invasion force in human history. The Germans’ strength was further increased by more than 30 divisions of Finnish and Romanian troops.
I knew that the German Army in 1940 (Blitzkrieg notwithstanding) was surprisingly reliant on old fashioned horse power, not least when the terrain made mechanised movement impossible.

But if anyone knows more about Soviet cavalry units ( and not just Cossack units, who fought on both sides) I'd be interested to hear. 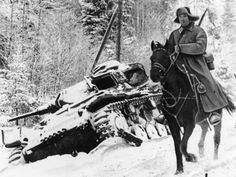 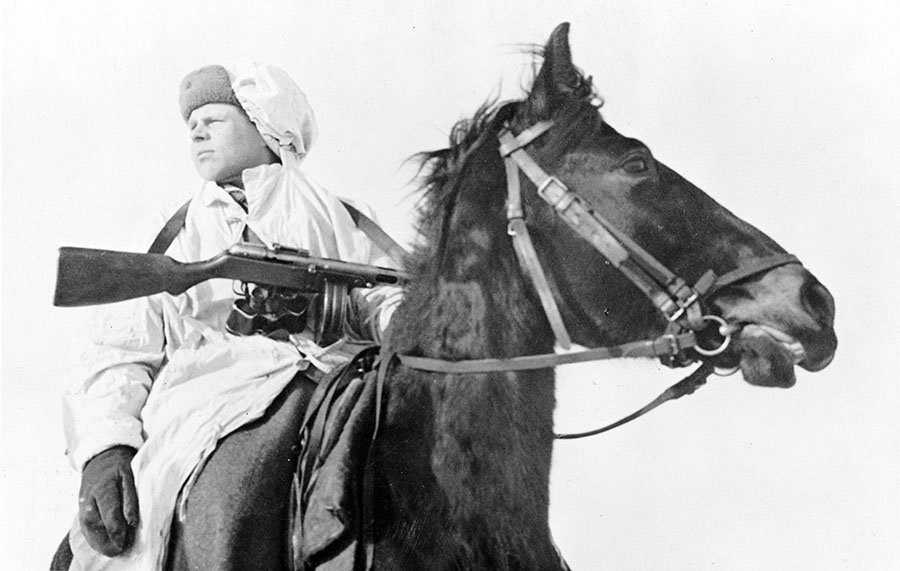 - To what extent did the Red Army ( as opposed to partisan units) use horses?

- when did they phase them out?

- where, in the long campaign leading to Berlin,were they a major factor ?

Ta.
Last edited: 19 Oct 2017
'The really important fact about the English intelligentsia is their severance from the common culture of the country' George Orwell

Anyway, see pic above in his natty blue strides.

(Ask the doofus in the black woolly pully about dress sense....)

In researching some of the pics I came across one of Vlad's propaganda sites, with the page headline:

'if it wasn't for the Red Army, Europe would be speaking German'

- well, yeah...but those that arrived on Unter Den Linden on foot were wearing a pair of the 19 million US made rubber boots* shipped to them by the British Merchant navy, courtesy of the RN.

The 5 Most Widely Believed WWII Facts (That Are Bullshit)


* probably all size 13 left....
Last edited: 19 Oct 2017
'The really important fact about the English intelligentsia is their severance from the common culture of the country' George Orwell

Significant chunks of the country were inaccessible to wheeled vehicles - cavalry was one solution for that problem.

In addition, Germany spent the war perpetually short of oil. It took 650,000 horses into Russia to move guns and other equipment for the infantry divisions.

Russia used horses for mobility in the early years of the war. Not enough vehicles to go around. When US lend lease really kicked in, they had enough lorries (and fuel) to given then a tactical mobility advantage over the German Army.

Not mocking, just asking. There were lots of red trizers when I was in Hohne. And we were expecting the Russian 3rd Stolichnaya army to arrive at any second.
3; 2; 1; Firing NOW.........

Book Reviewer
Watching the World at War episode - and many other similar sources, one of the problems for both motorized transport and artillery was the intense cold ....minus 40C etc

The shashka: Symbol of the Russian cavalry
'The really important fact about the English intelligentsia is their severance from the common culture of the country' George Orwell

Book Reviewer
Here's a song to lend the thread a bit of atmosphere:

‘Men sail a boundless and bottomless sea. There is neither harbour for shelter nor floor for anchorage, neither starting-place nor appointed destination. The enterprise is to keep afloat on an even keel.’ - Michael Oakeshott
S

In late 1942, at the time of mechanised forces and aircraft warfare, the American WD felt (in one INT Service bulletin dated October 1942) that the Russians had proved the case for effective horse cavalry raids. After thorough recce's: night-time Russian cavalry offensives avoided aerial attacks; they could move, dismount and strike better in silent hours. Forestry gave recce troops ample cover to watch "enemy movements; strength, location of outposts, and locations of tank parks and night bivouacs as well as enemy HQ and rear elements".

The Russians planned to complete these attacks "a couple of hours before dawn and to avoid air attacks". Most of these mounted forces attacks - planned over a couple of days - were designed to clear paths for infantry.

Attacking from two directions for instance north and west to avoid blue on blue, the enemy would be caught in the Russian crossfire. The Russians also muffled anything that clanged, stirrups and such, with straw or felt; their troops and mounts were inspected before they approached enemy positions in total silence. No shots were fired unless the Germans opened up and got the Russian volleys.

Experience has taught the Russians that it is difficult for cavalry to use artillery in night operations, except while on the defensive. Normally, the cavalry regiments and squadrons take along their heavy machine guns in carts. The machine guns are capable of accomplishing the mission usually assigned to artillery. Antitank units are equipped with antitank weapons, grenades, and bottles of gasoline ("Molotov cocktails").
Click to expand...

At a point about 3 to 5 miles from the enemy positions, the machine-gun carts are left in the open and the guns and mortars are carried in pack. The troops dismount again in open areas near the enemy outposts, and the horse-holders hide the horses.
Click to expand...

Cavalry can operate in very severe climatic conditions and over severely cut-up terrain. Over extremely difficult terrain, Red Army cavalry can average 5 miles per hour. Small units are unable to maintain continuous movement for long periods under combat conditions due to lack of organic transport and difficulty of resupply. Large units, however, with a sizeable supply train and an established resupply system, can operate for much longer periods and over long distances. One reinforced cavalry corps was given the mission of penetrating behind German lines and advancing for 60 miles parallel to the front and across the enemy lines of communication, thus effecting a junction with another cavalry corps in the area. The movement was entirely through forests and crosscountry in 2 feet of snow, with temperatures as low as 30 degrees below zero. In 6 days, the corps traveled 55 miles and captured large supplies of enemy matériel.

Red Army conception of cavalry raids extends to larger operations, over a longer period of time, and with a larger body of troops than is normally considered as a raid by U.S. doctrine. One raid made during World War II included a whole corps and lasted for 135 days, much of the fighting being behind the enemy lines.

In the breakthrough, Red Army cavalry was a valuable asset to the pursuit. When an enemy rear guard attempted to hold up the pursuit, the cavalry was able to make wide flanking movements through swamps and other difficult terrain to strike the retreating enemy in the flanks and to set up road blocks. In addition, the Soviets believe cavalry is useful in attacking enemy artillery and salient terrain features to protect highways along which armor and self-propelled artillery can then advance more easily.

It is a Red Army practice to detach small cavalry units from the main body to reduce by-passed strongpoints. Here the cavalry attacks dismounted from all sides, supported by their mortars and machine guns. Generally these detached units are of sufficient strength to reduce the strongpoint quickly so that they can rejoin the main body of cavalry troops.

Cavalry is used by the U.S.S.R., in conjunction with other arms, in the same manner in which it is used by other armies. Cavalry is used for reconnaissance, counterreconnaissance, screening, and patrol missions. The Soviets make extensive use of night cavalry reconnaissance and raids, particularly during winter weather.
'The really important fact about the English intelligentsia is their severance from the common culture of the country' George Orwell

How much was it true cavalry or (really) mounted infantry?
It takes the Navy three years to build a new ship (hah!) it will take 300 years to build a new tradition.
The Arrse site redesign can be blamed for all that is wrong with the world.
The internet: It's life Jim. but not as we know it.
There should be a West End Show - ARRSE The Musical.

There is a lot of interesting stuff on Sov use of horses here: Russian Army and Red Army Horse drawn wagons and carts • Axis History Forum
The face that lunched a thousand chips.

eodmatt said:
Soviet cavalry .... were they the ones with the red trousers?
Click to expand...

MARSHALVAUBAN said:
How much was it true cavalry or (really) mounted infantry?
Click to expand...


Essentially mounted infantry and they weren't seen a great deal after 1942, as I recall, in regular Red Army units. They remained popular with partisans though, since it gave them better mobility in the deep swamps and forests of western Russia.

MARSHALVAUBAN said:
How much was it true cavalry or (really) mounted infantry?
Click to expand...

Interesting question needing access to Russian archives and reliable military history. Also depends on which year between, say, 1941-45 for instance. After cuts and purges, the Russians fielded around four Cavalry Corps and 13 Cavalry Divisions just before Barbarossa, but they reorganised and upgraded their OOB a couple of times as the war went on. On Horse Cavalry post-Barbarossa I have no idea.

Horse Cavalry operated on the Steppes/open steppe country - e.g. Ukraine - in 1941. Mounted troops - Cavalry, Mountain Cavalry, and Cossacks (plus horse artillery battalions) - seem to have been effective against infantry. 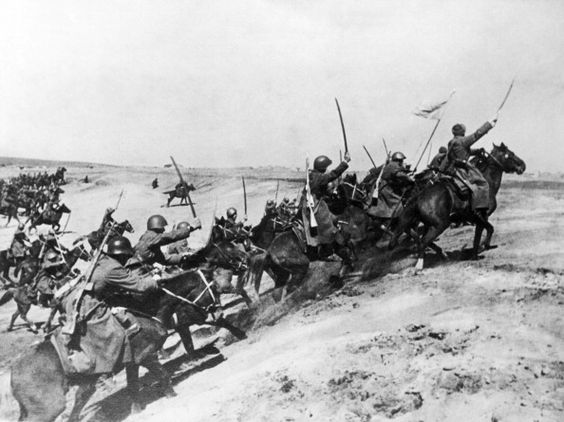 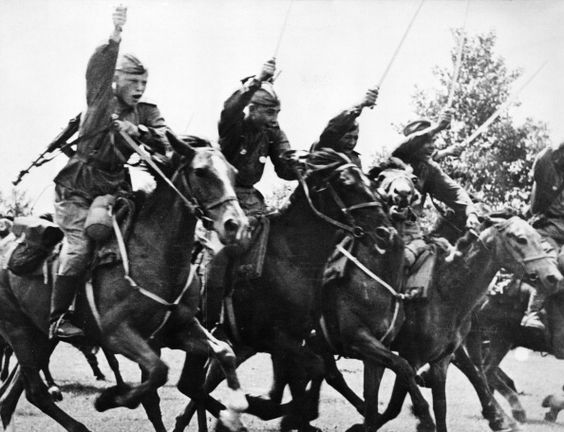 In some books, mounted troops got around easier in mud and snow, and apart from injuries to their mounts they didn't suffer from fuel shortages and freezing. Russian Cavalry ops were quieter and could transport heavy machine guns and supplies within a couple miles of their enemy, in total silence with strict tactical discipline , for mounted raids on German positions. Deployed since ancient times, mounted/dismounted ambushes and raids often featured in Russian warfare against the Germans. Cavalry units consisted of Sabre squadrons, heavy machine guns, mortars and field artillery. Often, the horses would be hidden a few miles from the target, horse-holders looked after them, and the weaponry was carried forward in packs.

Hard to tell how many gen Red Army mounted cavalry troopers there were, since the SU was so vast, and without combing through Intelligence and Russian archives (not always translated from Russian).
Favourite ARRSE pages: the ARRSEpedia Military Genealogy category.
https://www.arrse.co.uk/wiki/Category:Military_Genealogy

This is supposed to be the standard sabre issued to Red Army Cavalry the soldiers in the pics above seem to be carrying it
No guard on the hilt- which is curious. 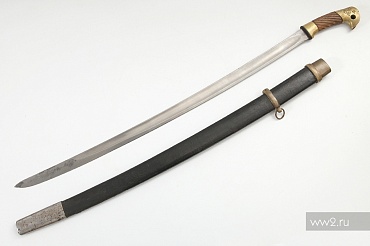 Last edited: 19 Oct 2017
It takes the Navy three years to build a new ship (hah!) it will take 300 years to build a new tradition.
The Arrse site redesign can be blamed for all that is wrong with the world.
The internet: It's life Jim. but not as we know it.
There should be a West End Show - ARRSE The Musical.

MARSHALVAUBAN said:
This is supposed to be the standard sabre issued to Red Army Cavalry the soldiers in the pics above seem to be carrying it
No guard on the hilt- which is curious.
View attachment 300800
Click to expand...

Seems to be common; Polish Cavalry had similar weapons, better handles, but Sword theory and Sabres aren't my bag. They're slashers, no Hilt guard goes back to Napoleon's days but maybe has something to do with balance, and cut and thrust on horseback at speed? 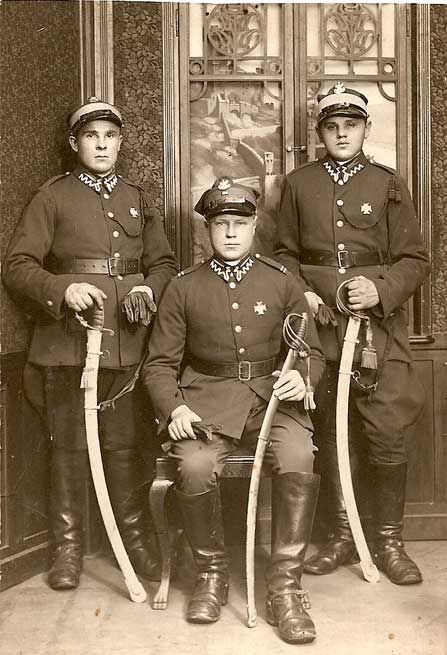