Something From History You Probably Never Knew...

How's about we all post one interesting but little known fact to do with military history? Well, I'd find it interesting and, besides, I can't get to the pub just yet...

Starter for ten: During the period of the Napoleonic Wars, French propaganda compared the struggle between Britain and France to the Punic Wars, casting France in the role of Rome (a new, revolutionary kind of empire on a mission to teach civilisation and citizenship to the world) and painting Britain as the heir of Carthage (a greedy and rapacious trading empire concerned only with profit margins). It's quite an interesting perspective, really, and stands up to more than a cursory glance once you strip away the over-positive view of Rome/France and some of the negative barbs directed at Britain/Carthage. The major difference, of course, is that Hannibal lost while Wellington won (and he didn't even need any elephants).

"NO GODS, NO MASTERS"

The British Army's first Casualty in WW2 was a member of the British union of facists
When I was bound apprentice in famous Lincolnshire
Full well I served my master for more than seven years
Till I took up to poaching, as you shall quickly hear
Oh, 'tis my delight on a shiny night in the season of the year

On the Lotus Elise: "This car is more fun than the entire french air force crashing into a firework factory"

During the Napoleonic Wars a British PoW enlsited with the Frog Army to fight in Russia.He escaped the debacle and when Nappy turned his attentions to Britain again the PoW went back into the slammer again as he refused to fight with the Frogs.

He was Court Martialled when freed and found Not Guilty as he had not betrayed his country.

He left the Army when the Napoleonic Wars ended at Waterloo and he became a rozzer in Falkirk.

It was him who arrested Burke and Hare in Edinburgh!

One of the soldiers that Patton slapped for cowardice in Italy was the paratrooper who got snarled up on the church tower in St Mere Eglise and was forever immortalised in The Longest Day.....
Those are real bullets aren't they?

The conversation of bullets.
Resting men.
The best dirty jokes in the world.
Cold sweat - that malignant little friend - outstaying its welcome in the armpits and trousers.

As a side note - Nigel Green - despite a memorable performance, was about 40 years old at the time of the movie.
Although at the actual battle in 1879 the real Colour Sergeant Bourne was only 24
(wiki knowledge!!)

Paul Revere, William Dawes, and Samuel Prescott kept watch in Boston for the approach of British troops the day before the Battle of Lexington and Concord at the outset of the American Revolution.

However the much quoted statement of "The British are coming" has been proven to be inacurate, as at the time, America was not a Nation of Americans, mainly because the Nation had not yet been born.

The continental army was made up of several "nations" including British colonialists.

Therefor it is generally agreed that what in fact was said, is, "The soldiers are coming"
D.I.L.L.I.G.A.F.

Moderator
Book Reviewer
1967 - Vietnam War. Gen. William Westmoreland, commander of U.S. Military Assistance Command Vietnam, welcomes 1,200 Thai troops as they arrive in Saigon. By 1969, Thai forces in Vietnam would number more than 12,000.
"I do not believe in the God of theology who rewards good and punishes evil." Albert Einstein, and he knew a thing or two.

loaded_not_ready said:
One of the soldiers that Patton slapped for cowardice in Italy was the paratrooper who got snarled up on the church tower in St Mere Eglise and was forever immortalised in The Longest Day.....
Click to expand...

Urban myth I think mate
According to witnesses, General Patton was visiting patients at a military hospital in Sicily, and came upon a 24-year old soldier named Charles H. Kuhl who was weeping. Patton asked "What's the matter with you?" and the soldier replied, "It's my nerves, I guess. I can't stand shelling." Patton "thereupon burst into a rage" and "employing much profanity, he called the soldier a 'coward'" and ordered him back to the front. As a crowd gathered, including the hospital's commanding officer, the doctor who had admitted the soldier, and a nurse, Patton then "struck the youth in the rear of the head with the back of his hand". Reportedly, the nurse "made a dive toward Patton, but was pulled back by a doctor" and the commander intervened. Patton went to other patients, then returned and berated the soldier again

Private John M. Steele was the American paratrooper made famous in the movie, The Longest Day who landed in Sainte-MÃ¨re-Ãglise, the first village in Normandy liberated by the Americans on D-Day, June 6, 1944. 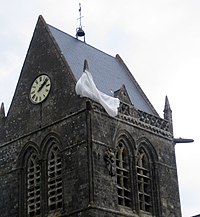 We should remember the tremendous contribution of the Queen Mother to the war effort:
As the BBC pointed out, she 'bravely remained in London beside her husband' during the war.
This contrasts sharply with the actions of my grandfather who, on the declaration of war immediately left his wife and children and pissed off, first to France, then North Africa, Italy, France (again) and finally Germany.
The shame will always be with us.

The last survivor of the Crimean war died on 7 April 2004. Timothy was the ships mascot on board a RN vessel during the Crimean War. Timothy died aged 160.

The very first bomb dropped by the Allies on Berlin during World War II killed the only elephant in the Berlin Zoo.
D.I.L.L.I.G.A.F.

Our oldest allies on the north American continent are the Iroquois indians.

1206 members of the Home Guard were killed on duty or died of wounds during World War Two.

During the Normandy landings several asians in the service of the Wehrmacht were captured, three of whom were Korean. It seems that the Koreans had been conscripted into the Japanese Army but after being captured by the Russians at the Battle of Nomonhan in the Russo-Japanese War (part II, the 1940âs one, not the 1904-05 one). They were pressed into service in the Russian Army. Captured by the Germans in the Ukraine, the Koreans were then pressed into service in the Wehrmacht. They were then captured by the Americans whilst they were engaged working on the Atlantic Wall. The Americans (mercifully) did not press them into service but rather held them as prisoners of war.

It seems that these poor souls never made it back home to Korea as apparently the Koreans were exchanged with the Soviets for American POWs liberated by the Red Army. "

The German submarine U-120 was sunk by a malfunctioning toilet.
B

The first shot of World War II in Europe was fired 20 years, 9 months, 19 days and 18 hours after the last shot of World War 1 was fired. It was fired from the 13,000 ton German gunnery training battleship Schleswig Holstein (Captain Gustav Kleikamp) which was on a visit to Poland to honour the sailors lost on the German cruiser Magdeburg sunk in 1914, some of whom were buried in Danzig.
"You cannot legislate the poor into prosperity by legislating the wealthy out of prosperity. What one person receives without working for, another person must work for without receiving. The government cannot give to anybody anything that the government does not first take from somebody else. When half of the people get the idea that they do not have to work because the other half is going to take care of them, and when the other half gets the idea that it does no good to work because somebody else is going to get what they work for, that my dear friend, is the beginning of the end of any nation. You cannot multiply wealth by dividing it."

The last man to die on the battlefield of Agincourt in 1415 was killed by a firearm rather than the longbow you might expect, the last man killed by a longbow in war (or at least recorded as so) was a German soldier during the second world war by Capt. John Churchill during the Dunkirk retreat of May of 1940.
J

Spanish_Dave said:
The German submarine U-120 was sunk by a malfunctioning toilet.
Click to expand...

Apparently it wasn't but another U-Boat did suffer that fate
http://www.uboat.net/boats/u120.htm
Sorry for being pedantic but I was curious enough to look it up

As an aside, apparently U31 was sunk twice in 1940.
Must have been a strange boat to crew after the entire first crew died in it.

7 out of 10 statistics about World War II were made up on the spot.

jimmys_best_mate;3832844 said:
If BAe got the contract then we'd order a couple of Leopard Seals to deal with the penguins but we'd end up with a couple of Salmon 'fitted for but not with' teeth by 2038 at only £24bn.
Click to expand...

During the second world approx 27 allied soldiers volenteered to serve in the werhmact under the designation the british free corps,one of these men was wounded in action and awarded a medal, the only briton ever awarded a german army decoration in WW2.

An illustrated history of Military Motorcycles

B
Julius Caesar, the greatest story of War and Warfare in History?
2