This book was first published in 1985 (although still available through various book dealers on Amazon - see link below) and is a fascinating peek into a time when the British Army had 60,000 soldiers based in West Germany alone, and when 'Today another British soldier was killed in N.Ireland" was a common phrase for news presenters. I'm posting this review now, for no other reason than I have just re-read it and thought a new generation might find it of some interest.

The author, Mr. Tony Parker, was a pacifist and had been a conscientious objector in WW2. He was open about this with everyone that he spoke with, and in one chapter (Coda: The Sweet War Man) this subject is in itself a talking point. As with several other of his books (the one about lighthouse keepers is another gem), Parker's style was very much 'documentary'. Indeed, most of it reads as a transcript for a 'fly on the wall' style reportage. Parker rarely imposes himself, letting instead his interviewees speak for themselves. Occasionally prompting, but never interrogating. Those interviewees come from the the (then) 3 Regular battalions of the R. Anglians, from Pte to COs and a fair sprinkling of their wives. To a large extent, it really is a jump back in time to eavesdrop in on conversations from the past. Occasionally you are struck by how much certain attitudes remain extant, as much as by how things have changed.

Mr. Parker interviewed the soldiers in Belize, UK, Cyprus and the UK (including on patrol in N.Ireland). They also discussed a recent deployment as base security to Greenham Common. The views expressed ranged widely and were often in contrast to each other, serving to remind oneself that there really never was a 'typical squaddie'. Mr. Parker often juxtaposed those contrasting views next to each other in print to highlight the effect. 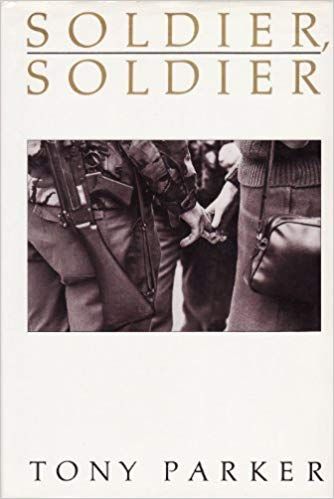 On the back of the book's dust jacket is a copied a comment from a commanding officer:

"I hope your book won't only contain interviews with highly motivated soldiers and no one else; that'd give a very false picture. But it's going to be difficult to avoid it ...
nearly all the people you talk to are going to tell you that they're happy, the Army's a wonderful organization, and they want to go on being soldiers. ... So this'll be a big difficulty for you."

He really need not have worried.

It'll give half the Cold War Warriors flash backs and remind the other half of what they cannot remember because they had been on the Asbach again.
They shall mount up with wings as eagles.

Glad you posted this. I read it ages ago and have been surprised that it’s not previously featured on ARRSE.

Having thrown away a copy a fair while ago, I’ve recently been meaning to buy a replacement. Re-reding the likes of Akenfield has renewed my interest in oral history and this is an excellent example.

Along with Ticking With The Crow it gives an excellent example of how much and yet little has changed over the years. And unlike so many modern documentary formats, it allows interviewees space to breathe and express a perspective in their own terms, without contrived set pieces. I’d like to read some of his other books.

Aside from a general sense of futility and weariness around NI, a good number of accounts spring to mind from memory despite 10 years since i last read it - not least Pte Dinger Bell, the heavily dyslexic but Woosterishly keen subaltern, and a Company Commander relating how lovely it is to phone the mess from his office and ask that a hot bath is readied in preparation for his return... Happier times.

Charlie_Cong said:
Having thrown away a copy a fair while ago, I’ve recently been meaning to buy a replacement. Re-reding the likes of Akenfield has renewed my interest in oral history and this is an excellent example.

Along with Ticking With The Crow it gives an excellent example of how much and yet little has changed over the years. And unlike so many modern documentary formats, it allows interviewees space to breathe and express a perspective in their own terms, without contrived set pieces. I’d like to read some of his other books.
Click to expand...

Mr. Parker's style reminds me very much of the American writer Studs Terkel, I would very much recommend some of his other books too. It really is a snapshot of a bygone age, which as you mention is probably most vividly illustrated by accounts by (and about) some of the Officers.

Ticking with the Crow, its companion piece The Officers' Mess, The Regiment (about 1RGJ in 1976) and a few others, were examples of when the BBC used to excel at such documentary making. This book is seems very much of that same impulse of letting a person have their say, without coaching/leading, heavy editing or (in he case of the TV programmes) unnecessary backing music.