A team of Service Doctors at the Royal Centre for Defence Medicine, Birmingham have scooped a UK National award presented by the magazine Hospital Doctor .

Head of the Team, Col Tim Hodgetts was also presented with an individual award for Hospital Doctor of The Year for his work both in the A&E department of the Royal Centre for Defence Medicine at Selly Oak and his research work.
Click to expand...

Perhaps it will help to persuade a few more doctors to join...

the AMS does a bluddy good job, shout it from the rooftops. I'm fed up being knocked all the time. Doctors Nurses Physios Lab Staff even ODP's we are proud of the fact WE CARE, and provide good care. This just proves it.

1stgulfmac said:
the AMS does a bluddy good job, shout it from the rooftops. I'm fed up being knocked all the time. Doctors Nurses Physios Lab Staff even ODP's we are proud of the fact WE CARE, and provide good care. This just proves it.
Click to expand...

If the spelling was correct, would have been a good pun.
If you do everything at the last minute. Anything you do will only take a minute.

I am not an "Old Soldier" I am a Soldier of long ago.

I would be proud to wear the TRF (may it never die) as the more I read on here the more I see our Cap Badge fade away.

Colonel named Doctor of the Year


A doctor working for the Royal Centre for Defence Medicine has been named the Hospital Doctor of the Year. 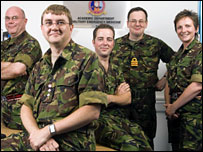 Colonel Tim Hodgetts won the overall award at the Hospital Doctor Awards for his work at the Academic Department Military Emergency Medicine.

Based at the University of Birmingham, his team was also awarded the Training Team of the Year prize.

They do research for military medicine. Judges said their work helped raise the safety and survival of casualties.

Of Colonel Hodgetts, they said he should be congratulated for his 'par-excellence' training programme.

"It is benefiting thousands of soldiers in many war-torn areas and also civilians in the UK and countries that have faced natural disasters."


It is in the nature of these things that the headman gets a mention ( and journalists can get their brains arounds 'Colonel') but it should be stressed that this is a Tri-Service team.
Click to expand...

(and well done Pat! )
'The really important fact about the English intelligentsia is their severance from the common culture of the country' George Orwell

News story: The Royal Centre for Defence Medicine pays tribute to the wreck of His Majesty's Hospital Ship Glenart Castle

A culture of Bullying - Report
2