This is a model I bought about three years ago with the intention of adding it to my collection of British Military WW2 Trucks. Tempes Fugit, as they say and I finally got it out to do it justice. This kit is out of production now, having originally been released in 1995 and then re-released in 2000. It is now an extremely rare kit, with only one or two coming on the market each year, selling for about £60 -£65 a throw!
The box, as you can see, is rather the worst for wear - the result of being stored in a leaking garage for three years! Happily for me, all of the kit pieces are in the box and have not suffered for it's incarceration. The instructions, such as they are, are also in one piece, but as you can see, there isn't a lot to them! The 50 - 60 parts are all well moulded but do have a lot of flash on them plus a large amount of extra resin left on them from the moulding process. 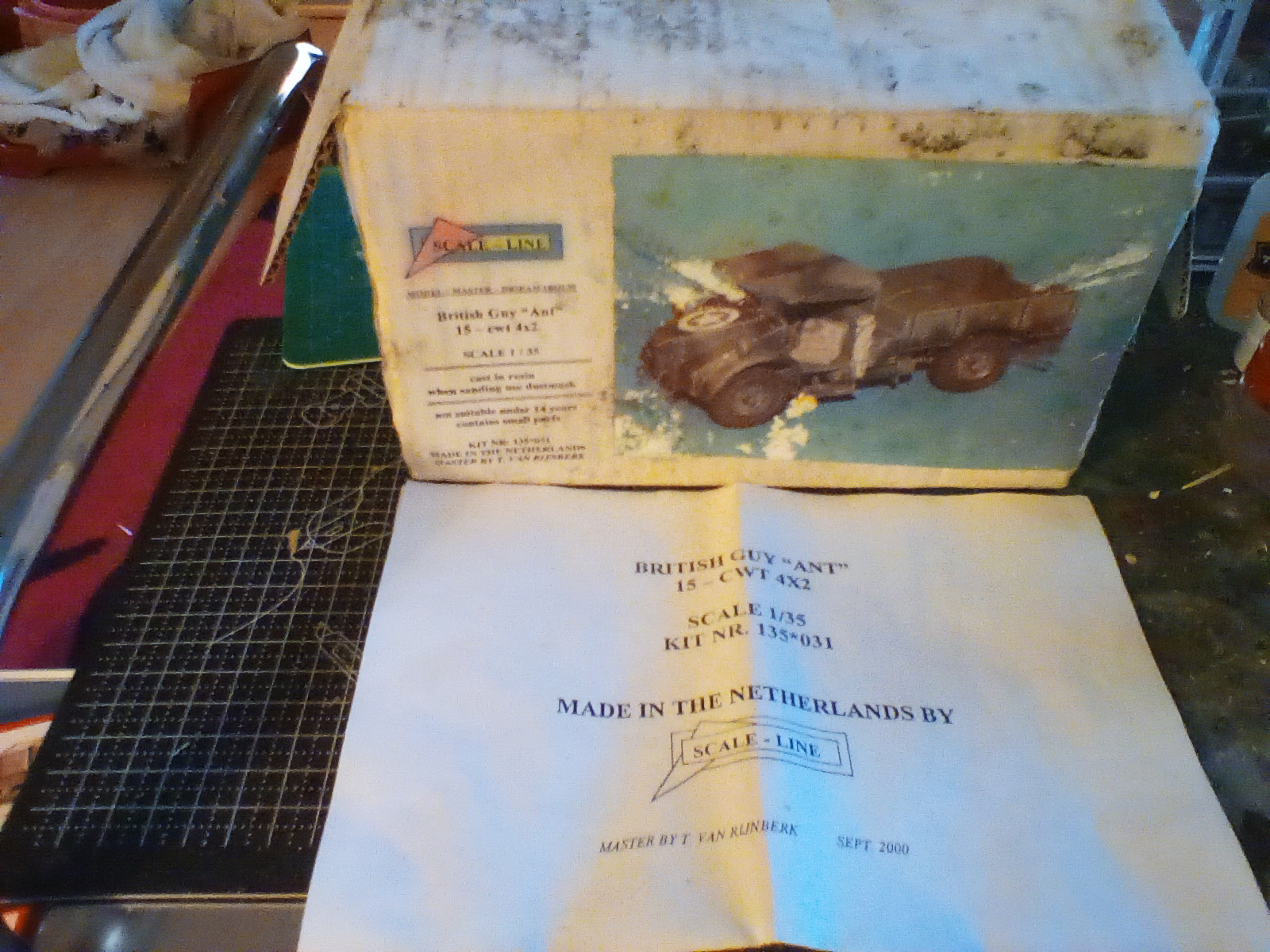 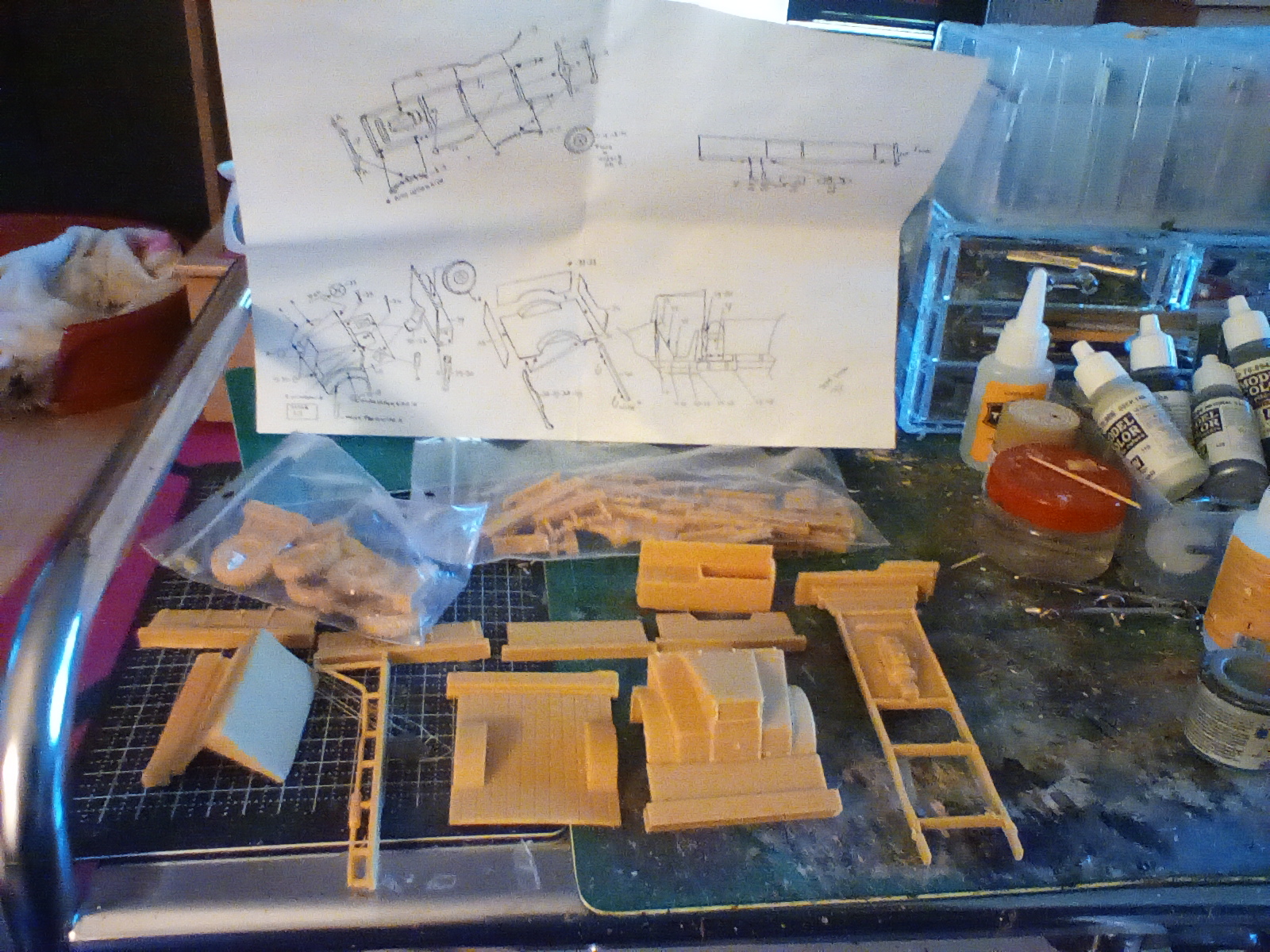 I've started in the usual place, the undercarriage. First attaching the front and rear leaf springs and then adding the axles, drive shaft and exhaust. While separating the drive shaft from it's carrier, I managed to break the flimsy narrow end. To rectify this, I drilled 10mm into the remaining piece and fixed a rod of plastic in place.
All mushrooms are edible, some however, only once! 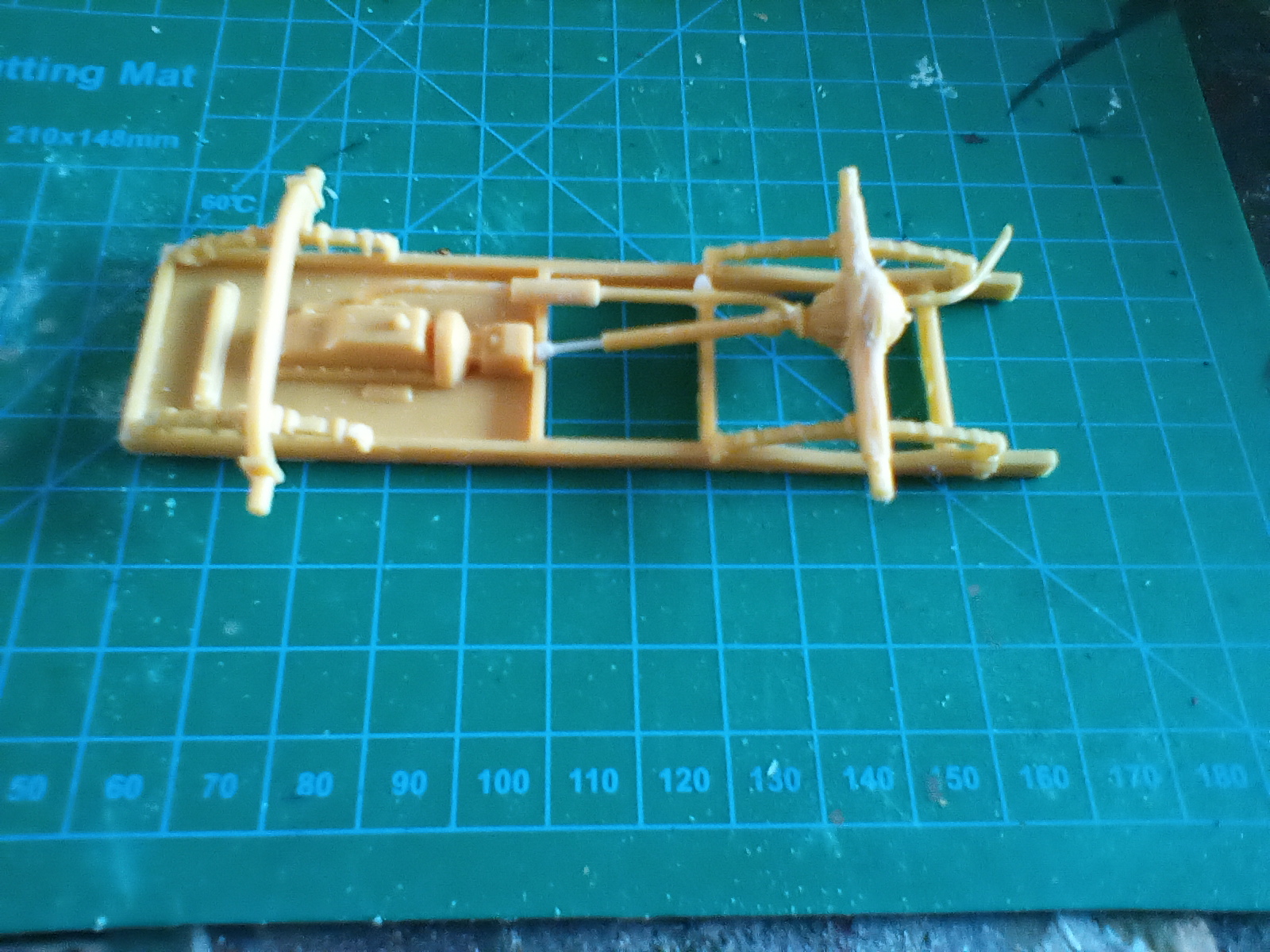 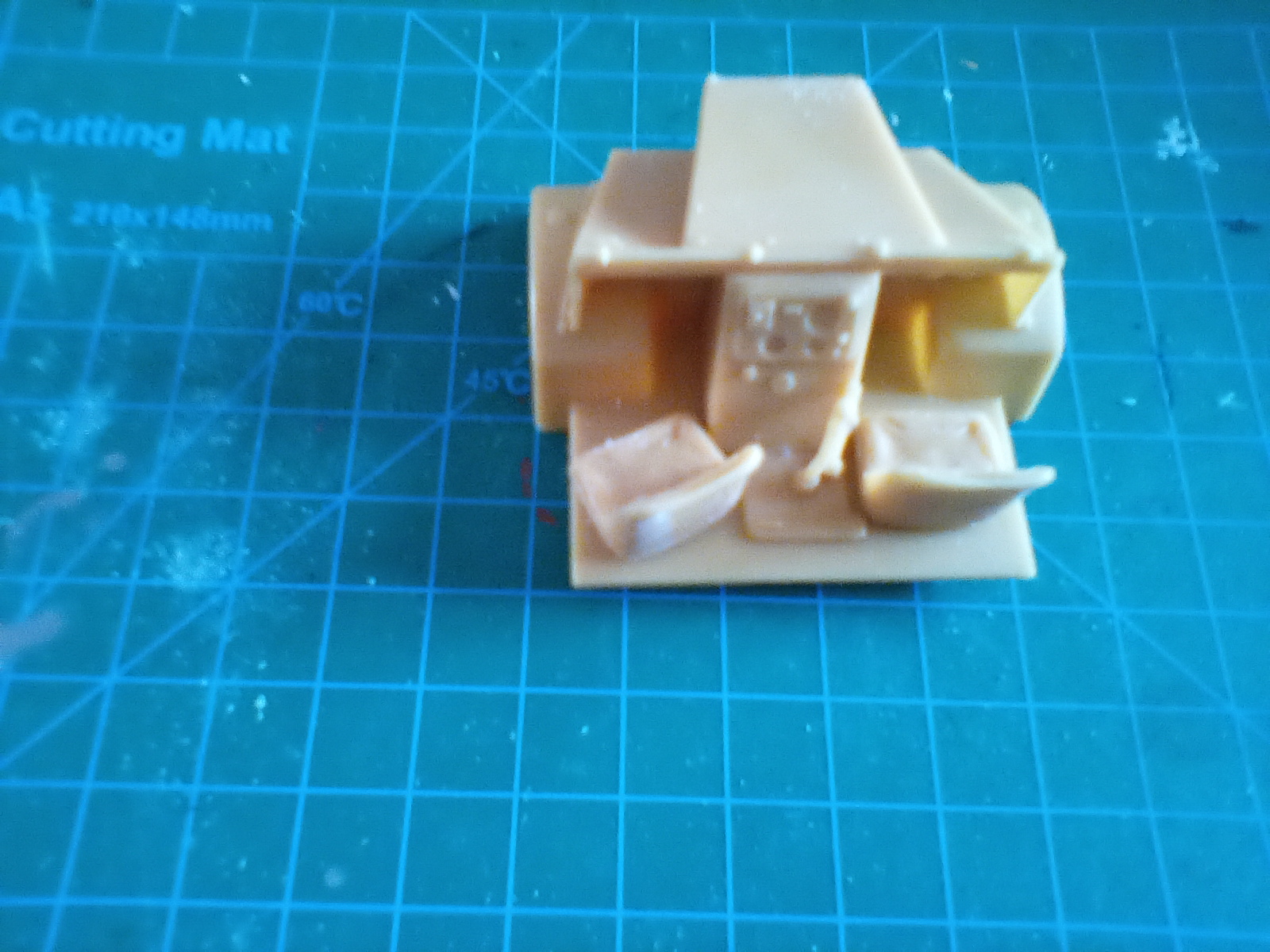 Cab showing the passenger seat positioned at 45°. As yet, I have found no satisfactory explanation as to why this was done, but it was a factory fit. 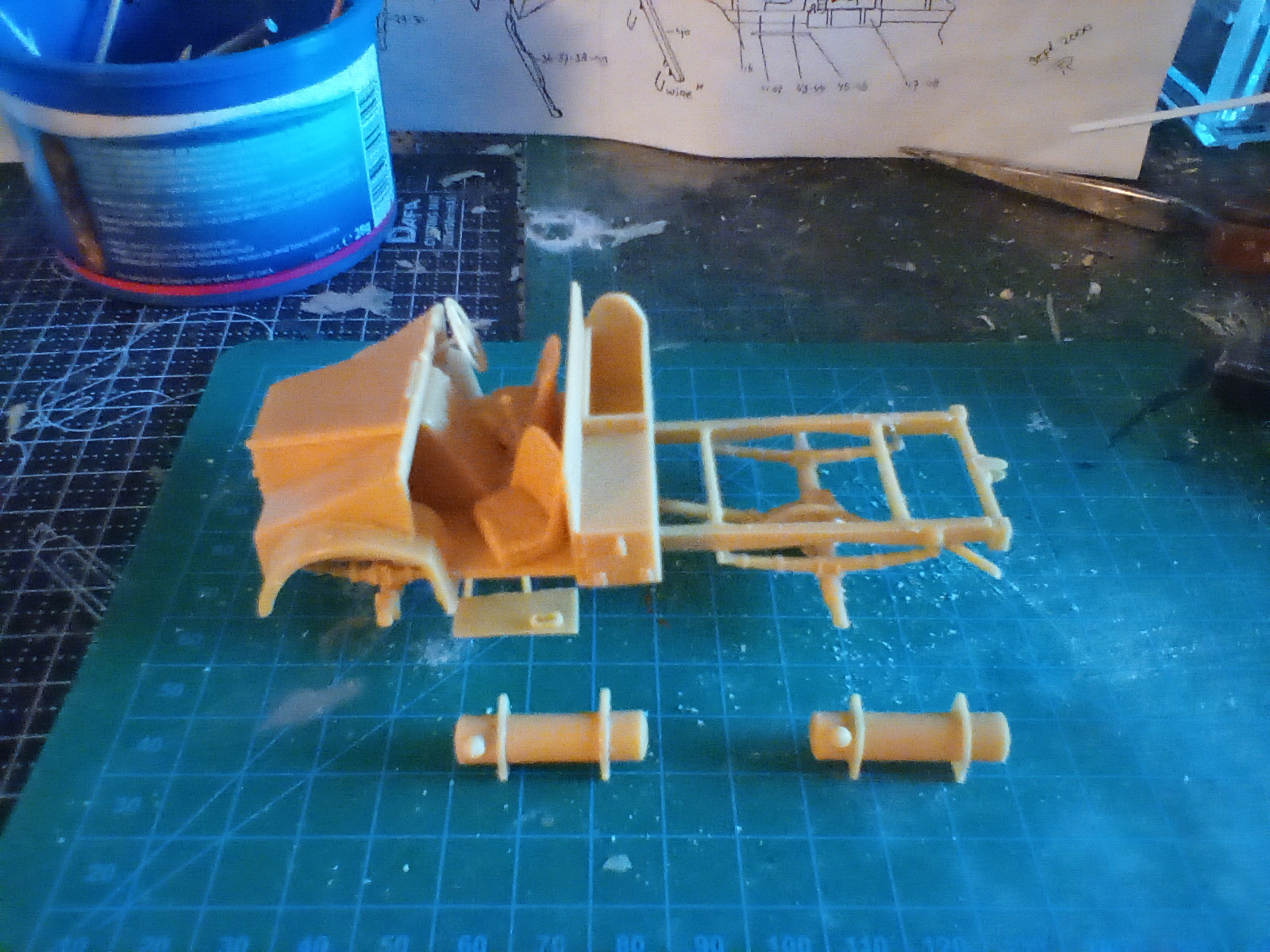 Rear cab wall with integral spare wheel carrier fitted. I decided to leave the two fuel tanks off until I had the rear box assembly fitted. 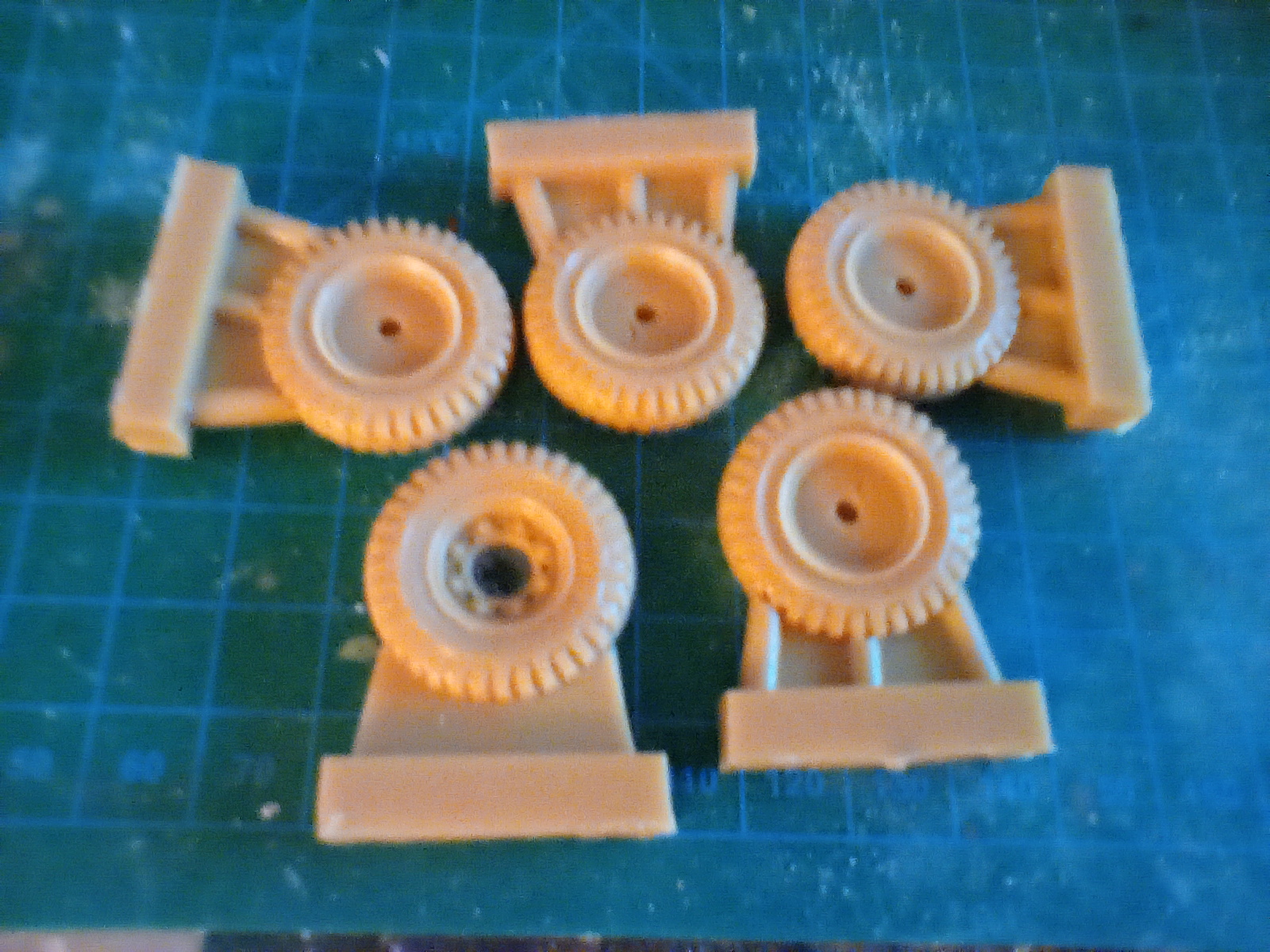 Decided to leave the main kit part while I sorted out the wheels. I cannot, for the life of me understand why model manufacturers leave this much over-mould on their vehicles. Usually, so much detail is lost unless one is careful with knife, saw and file! 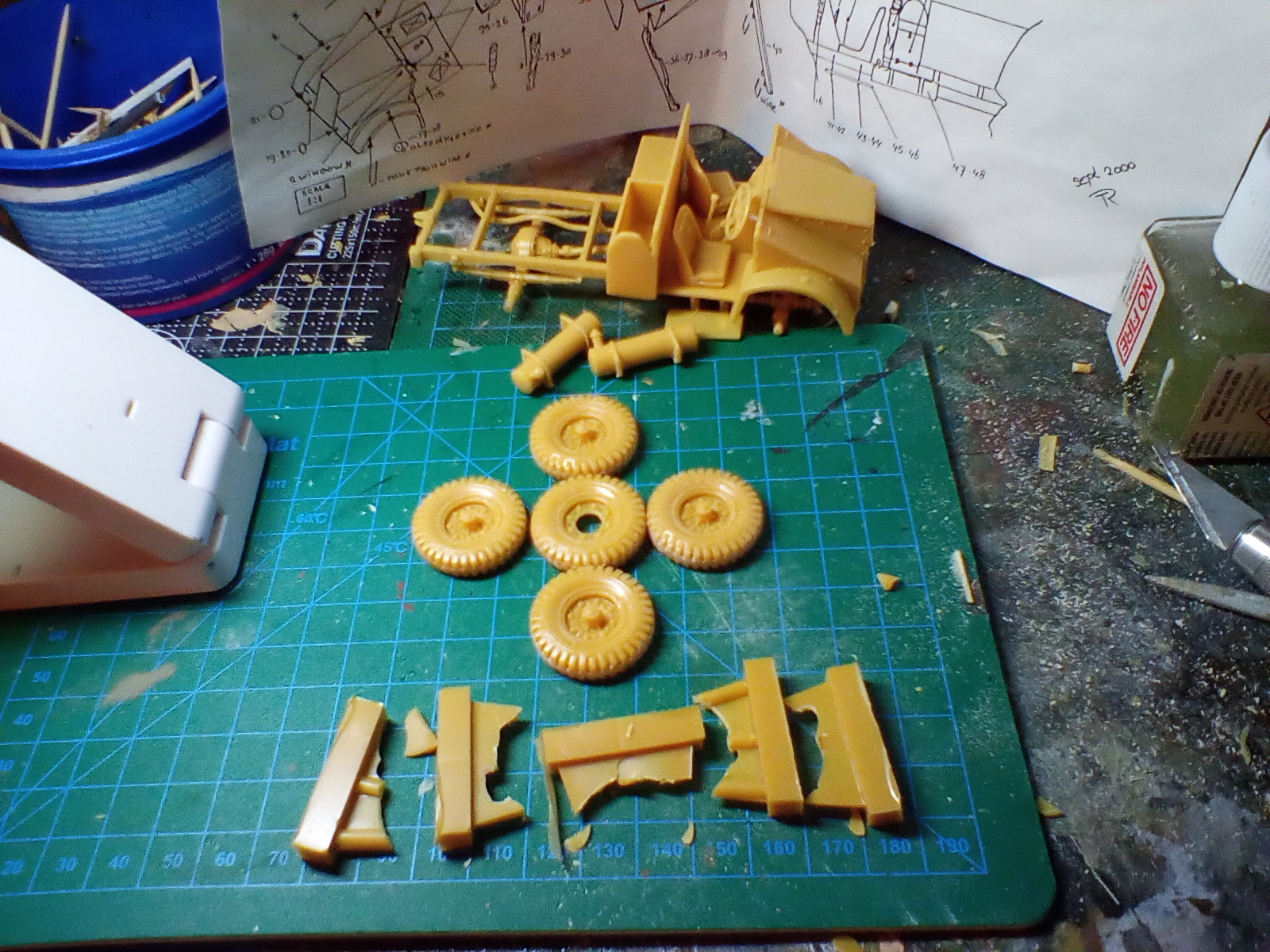 These came out pretty well and only required a minimum clean up.
All mushrooms are edible, some however, only once! 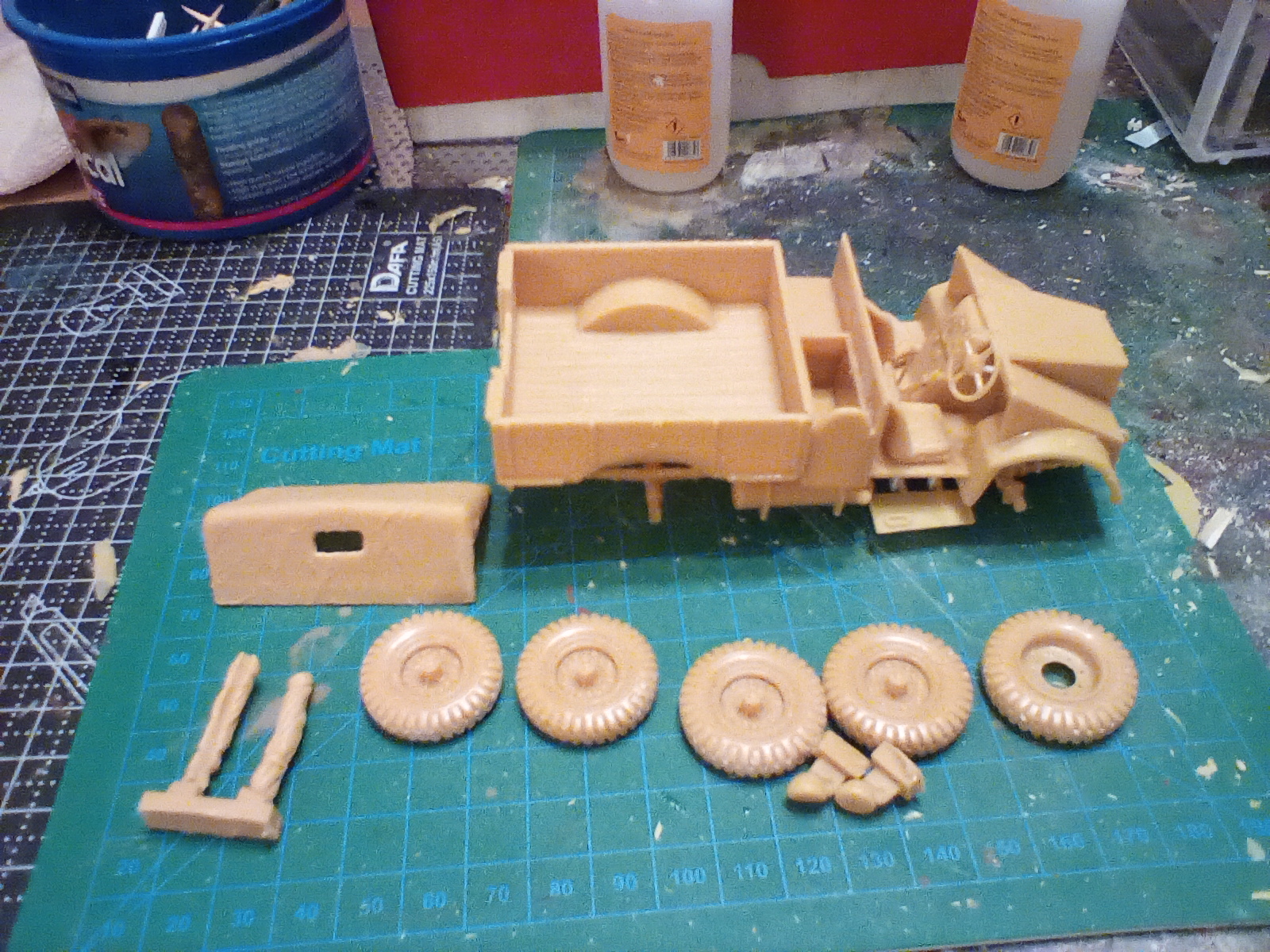 Last few bits, prior to painting. I will have to cut some airshield style windscreen but that can happen while I am waiting for the primer coat to dry. I haven't decided on decals yet, probably go with either a UK based training establishment or a pre D-Day unit. Hopefully have more to show tomorrow.
All mushrooms are edible, some however, only once!

Moderator
Kit Reviewer
Book Reviewer
As promised, the Ant was primed this morning and then given a spray coat of Tamiya Olive Green. Once dried, I sprayed all vehicle surfaces with Vallejo US Olive Drab (70.887) except the canopy which was sprayed with Vallejo Stone Grey (70.884). The cab interior was hand-painted with Vallejo Deck Tan (70.986). Gear sticks and Handbrake lever were painted in Vallejo Steel (71.065). The two seats got a main coat of Burnt Umber followed by a wash of Olive Green and then a dry-brushing of stone grey. Tyres, pedals, steering wheel and gear knob got a coat of Tamiya Tyre Black then the tyres were dry-brushed with Tamiya Dark Yellow. Weathering was carried out using light Olive tones and a black wash, while exposed metal parts were dry-brushed with metallic Grey.

As I said before, I wanted to depict a model from a home service unit, so I chose 12 Corps which was in Home Service until D-Day. The Arm of service patch is for a divisional RASC unit and a 2 ton bridging plate was added to complete the ensemble. The vehicle number, Z5520430, is being prepared and will be applied on the bonnet sides. All decals have been given a coat of Vallejo Decal Fix.

It's now over to you guys to judge. 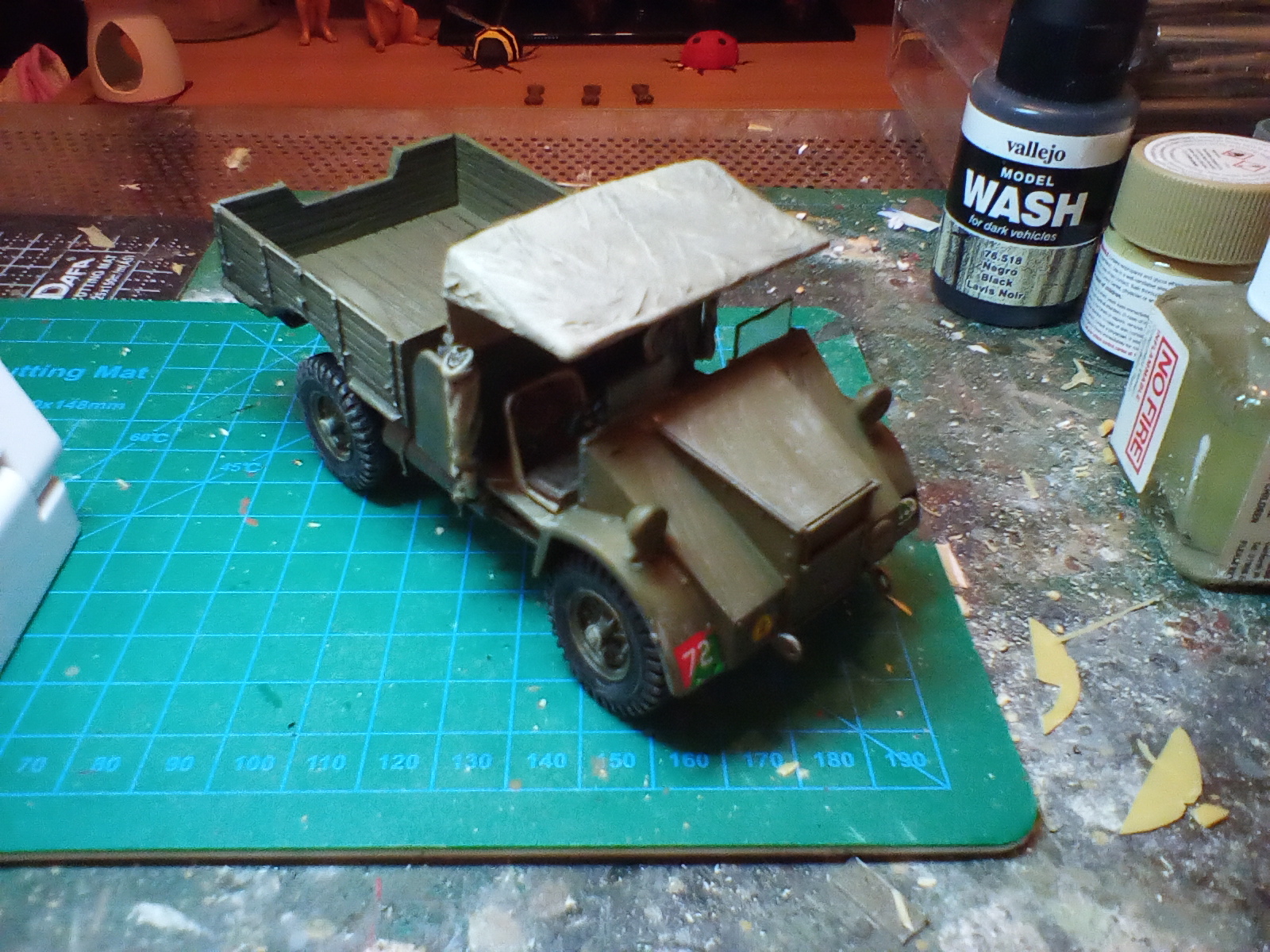 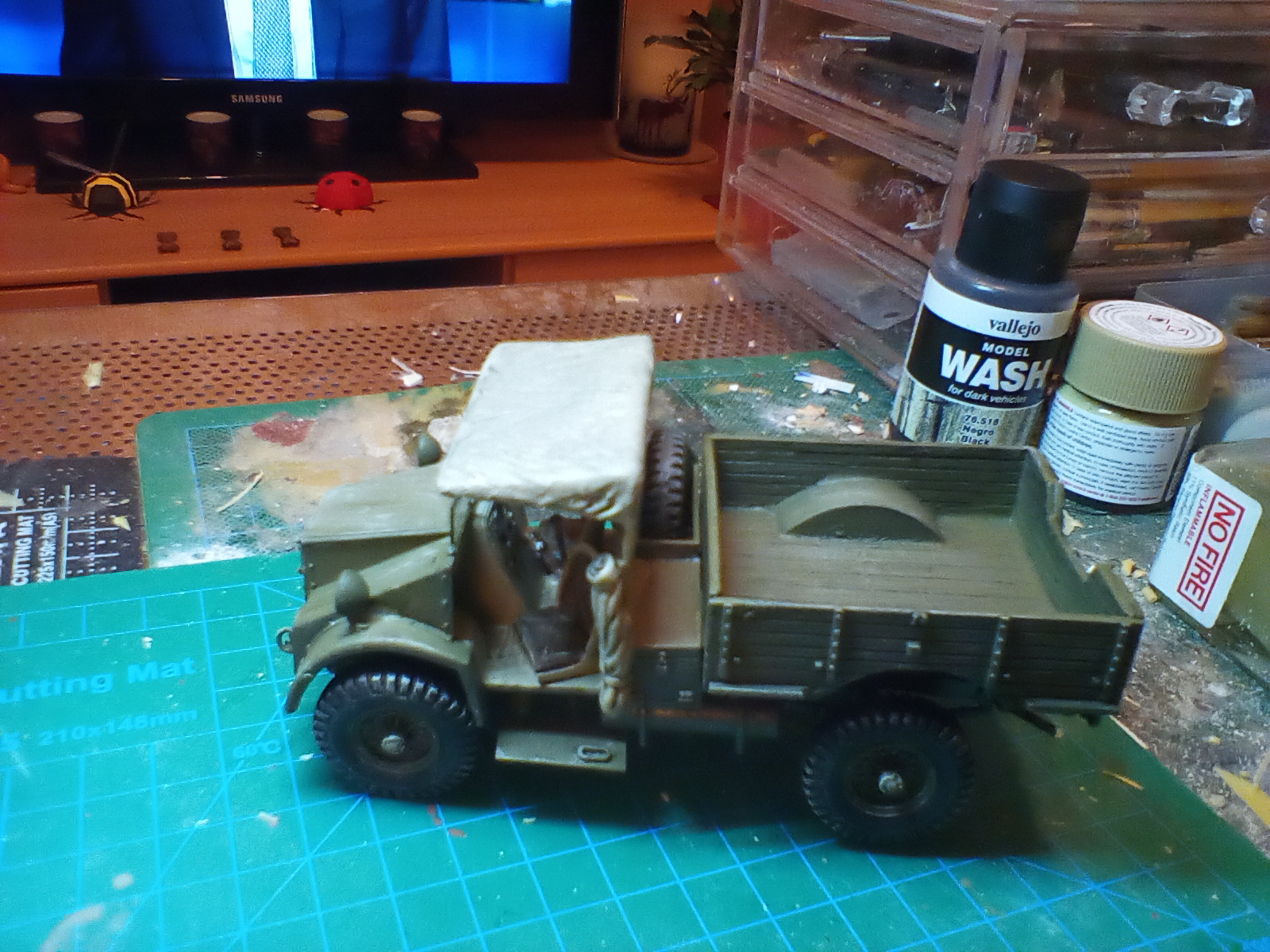 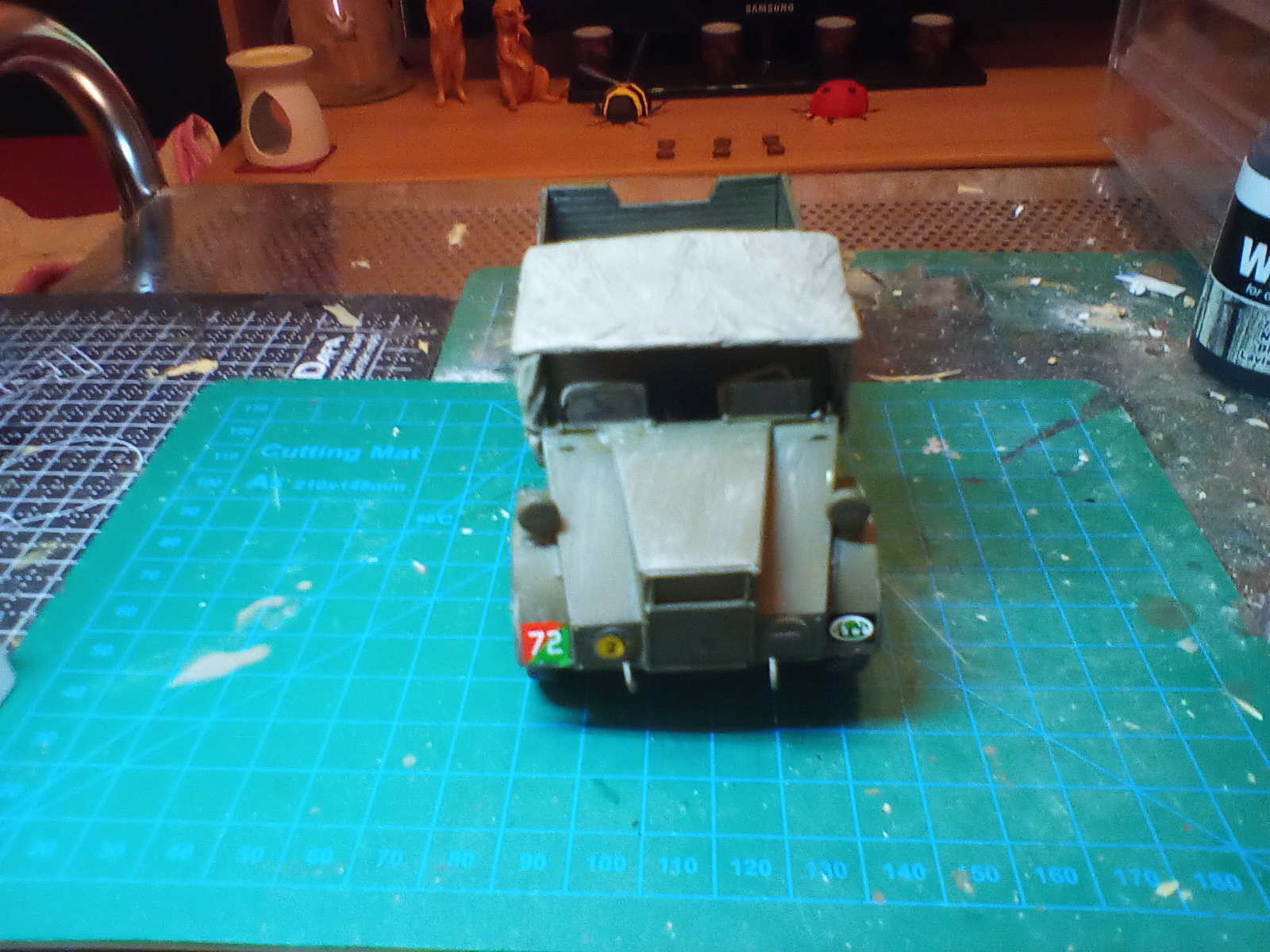