hope the neanderthalic iraqis hasnt raped her or anything like that


ive got a feeling hollywood is going to buy the film rights to the story  : only in america !
P

On a serious note i second all of the above,

On not quite so serious a note, If the film stars Jessica herself, then i will certainly pay to watch.

Have a look for yourself.

Agreed. She certainly wasn't issued with the standard British Army "Face-like-a-bulldog-chewing-a wasp and arrse-wide for the use of; 1" that we typically see lolling around the lines.

RSM! Arrange for me to be a BitLO at her unit, and keep the sodding A10's at a safe distance will you, there's a good chap!
Former Int Cell, RLC, and OTC/ACF Forums Moderator (Until the banality started to hurt)

How about a poll ARRSE hierachy? Who's going to play the lovely Jessica in the film?

Glad to see the "no one gets left behind" promise is still being kept.  Well done to all the Spec Ops involved in the operation. 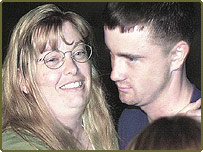 RIP
Waheeey. Wonder if she needs a nice mature, not yet balding ex SNCO to take care of her during her convalescence OK I'll get me coat. Stop pushing.

Well done to the spec ops guys though, jobs a good un. 11 out of 10.
"Remember that you are an Englishman, and have consequently won first prize in the lottery of life".

The Washington Post reported Thursday that the 19-year-old Army supply clerk shot several Iraqi soldiers during the March 23 ambush that resulted in her capture. She kept firing even after she had several gunshot wounds, finally running out of ammunition, the newspaper said, citing unidentified U.S. officials.


"She was fighting to the death," the Post quoted an official as saying. "She did not want to be taken alive."


My money is on Angelina Jollie...
He had bought a large map representing the sea,
Without the least vestige of land:
And the crew were much pleased when they found it to be
A map they could all understand.

MDN; ORG, Vespa; Gundolph, keep on topic or it gets deleted!
Former Int Cell, RLC, and OTC/ACF Forums Moderator (Until the banality started to hurt)

Ummm...if she didn't want to be taken alive...why was she? Give it 6 months for the movie, and it'll be that chick from "Alias".

It's quite a shock to realize that we're all in the same boat...almost makes me want to pull the plug!
V

i think the main reason she kept shooting was the prospect of iraqi gang rape   :-/
P

I've met a couple of female USAF "airmen" of about that age in the past  as I'm sure most people have and truely believe that she would've fighted until the end and that its not just some big propoganda story made up like some are suggesting.  I don't think the media are going over the top about her battles and the rescue mission, I just hope instead that any future rescue missions get the same amount of global attention.

Go Jessica!! A credit to her unit and to her gender. I suspect her combat skills might come in a tad useful when trying to control 35 unruly 5 year olds........

RIP
Just listened to a press briefing by a Col at the hospital she is at. She asked have I made my local paper?   Oh I think so.

A story about how they found her. Well done that man.

http://www.kansascity.com/mld/kansascity/5552797.htmv
"Remember that you are an Englishman, and have consequently won first prize in the lottery of life".

Moderator
Marks out of ten

In every story of courage, there is always the quiet unassuming heroes, who just get on with it.

Well done that man, a trip to the White House is in order. Would it be too much to suggest American citizenship for him and his family if they desire it?

It took balls, and it should be properly recognised
He had bought a large map representing the sea,
Without the least vestige of land:
And the crew were much pleased when they found it to be
A map they could all understand.

RIP
Looks like he is on his way to the good ol US of A. Good luck to him.

http://edition.cnn.com/2003/WORLD/meast/04/04/sprj.irq.pow.informer/index.html
"Remember that you are an Englishman, and have consequently won first prize in the lottery of life".

Hopefully, we'll never learn all the sordid details of what they did to her.

And, hopefully, we'll never learn the details of the fury the SF visited upon the Iraqis that were holding her.
B

According to the Daily Telegraph, the Iraqi who approached the US Marines outside Baghdad and told them where Jessica was being held is being protected along with his family. He put his life on the line by making a number of return journeys to the hospital to draw sketches of its layout so that the SF blokes could get in and out as quickly as possible.

Well done him. Apparently the USMC are trying to get him refugee status in America, I hope it works out.
"I've not signed for it, no one can prove that I lost it..."

Speech: We need to knock down the wall of silence around Syrian women: by Lord Ahmad