A former Royal Engineer has been reunited with three medals stolen from his home 18 years ago - after they were spotted on an internet auction site.

Graeme Olley's accolades include an MBE, a General Service Medal and a Queen's Silver Jubilee Medal. 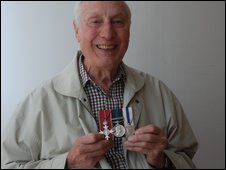 His stepson, a former police officer, found them on eBay where a Norfolk dealer was selling them for Â£795.

Police helped to retrieve the medals and handed them back to Mr Olley, 78, from Kent, who said he was "delighted".

The pensioner said: "I honestly thought I'd never see them again, then quite by chance my stepson was browsing eBay and saw them up for sale.

"It's just beyond belief really that all these years later there should be a set of circumstances like that."

Mr Olley was appointed an MBE in 1958 after working in Borneo to make a major river navigable on behalf of the government.

He was also awarded the General Service Medal for a tour of duty in Malaya from 1956 to 1958.

And he was recognised for his services to the country with a Queen's Silver Jubilee medal in 1977.

But in 1991 the medals were stolen, along with china and silverware, during a burglary at his home in Saltwood and Mr Olley thought he would never see them again. 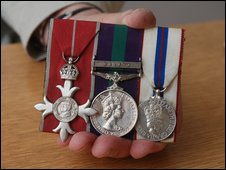 His stepson Simon Hathaway, 48, a former Metropolitan Police officer from Weston-super-Mare, North Somerset, came across the medals on the web and the family then contacted Kent Police.

Officers found the original crime report from 1991 and located the medals, which were returned to the family.

A police spokesman said: "The dealer who had them was happy to hand them over to police when he realised their background."

Mr Olley said: "They bring back many memories of how I got them and what a super party we had after receiving the MBE.

"My wife is just as pleased as I am that they've been returned. When I next see my stepson I'm sure I'll buy him a drink.

Mr. Chard Sir! Patrol has come back, Zulus have gone, all of 'em. It's a miracle! If it's a miracle Colour Sergeant, it's a short chamber Boxer Henry, point 45 caliber miracle. And a bayonet Sir! With some guts behind it!

Not a Sapper, but thats a cracking story. I bet he's dead chuffed!

Parachute Reg veterans at anti-vax Protest / Vet whom was apparently discharged for refusing to deploy...
22 23 24

At lat I have found