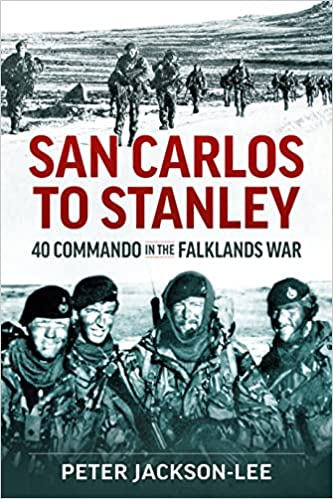 The book is very detailed, with extracts from daily logs, Part 1 Orders and signals, and interviews with officers and men of the Commandos who were there. The sense of indignation at being left to look after the beachhead, having trained and expected to do more is palpable, despite trying to take the view that Commodore Clapp gave them the job because he knew it was vital to the campaign, and they would do it well.

The relief when they were actually tasked with a mission with the Welsh Guards comes through very well, as does their disappointment in the performance of that unit on many levels. I was surprised that inter-unit hostility grew to the point that folk had to be reminded that the Argentinians were the enemy, not the Welsh Guards. The irritations continued even to the point of having the wording changed on the Welsh Guards memorial to reflect all who were involved. For this civilian, this was amongst quite a lot of information that I didn’t know.

There’s a lot of technical information in this book, as well as the interviews. Some of the stories are heartrending, It includes tales of the confusion of war, of dealing with accidentally being led into a minefield, and the way to approach picking up a boot only to find it’s still attached to a leg. These tales make one proud that young British men of that calibre are still willing to go and fight to protect the rights and lives of people they have never met.