holyphuc said:
Presumably that will effect the trajectory/range so they will have to practice and waste extra ammo?
Click to expand...

Aye, best practice down range in a safe direction away from own troops. Test weapon effects at the same time.
B

Simpering Civvie said:
Interesting article with video of Ukrainian troops training with the 105mm and GMLRS in Salisbury Plain. The Kiwis are chipping in with training too. 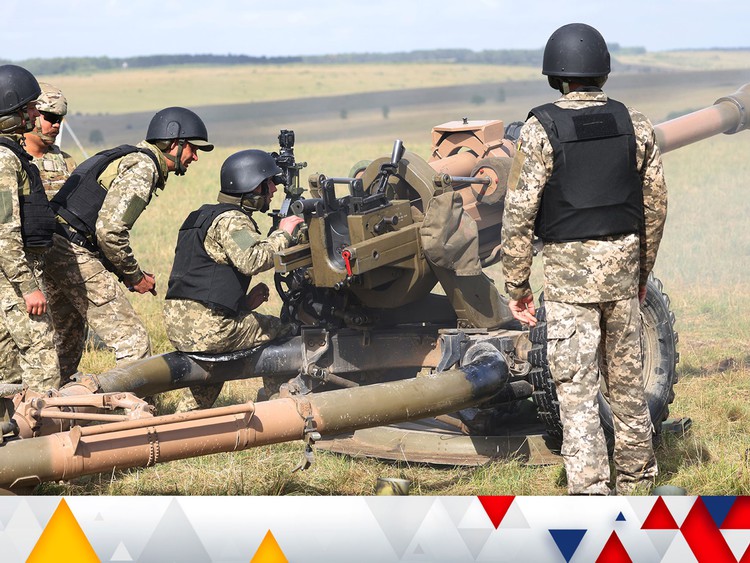 More than 450 Ukrainian soldiers have received training in the UK on a range of weapons such as the multiple-launch rocket system - seen as vital in the fight against Russia.

Apparently the students are usually already experienced artillery men so easily take to the new systems.

The article also mentions that the U.K. will be training 10k Ukrainian infantrymen every 4 months. Wish we could do more, though I suspect other western allies are also chipping in.
Click to expand...

We are, once Ukraine goes on the offensive most of the operations will be spearheaded by people trained here. We are not just training infantry. We have anything from 100-150 round my way on any given day and we are not on our first lot either, and none of those have been infantry bods receiving basic training.

I dearly wish we had more weapons to give them but believe you me when Zelenskyy thanks us for what the UK is doing for his country he isn't just blowing smoke up Boris' arrse.

Someone asked me if our town had been invaded by Ukraine, it pretty much has been....and it is great to see our lot doing so much for them. Add the refugees and we have probably north of 200 of them in this little town. If we are not twinned with somewhere out there after this war is over I would be amazed,
Last edited: 30 Jun 2022
D

twentyfirstoffoot said:
By removing Russian Forces they have re-established Sovereignty no need to reoccupy during hostilities and the Russians have learned although they might reoccupy they can not hold.
Click to expand...

The island is about 170 miles from Sevastopol.
Depending on the model, Harpoon has a 150 mile range.
Stick some Harpoons on it and the Black Sea Fleet become very nervous. They have about 20 miles of sea room to play in.
"You are a Racist and a Xenophobe" KGB Resident.
"You are a bigot" Steamboat
It's amazing the quality of people I upset.

NSP said:
Bernie Ecclestone has waded in by stating that he'd "take a bullet" for Mad Vlad'... 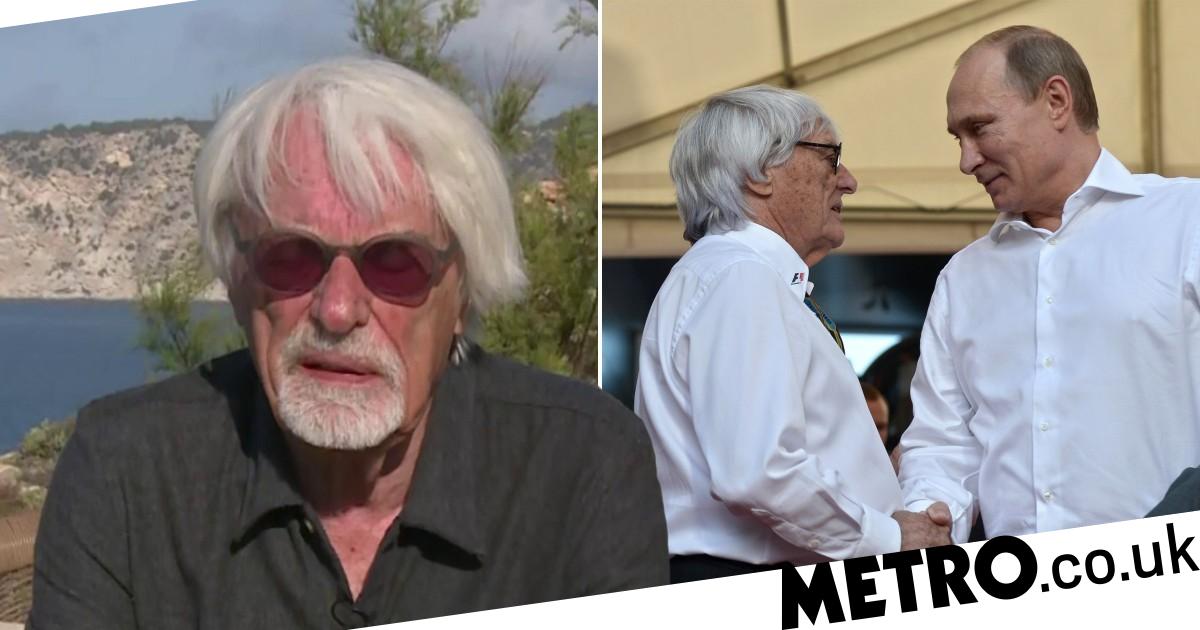 'One of the most shocking interviews I've ever heard!'

I wonder how he reconciles defending a man whose whim is causing the death and destruction of civilians and their towns and homes in a sovereign democracy?
Click to expand...

Given the current state of the Russian Army, I wouldn't be surprised if Putin asked Ecclestone to put his commitment in writing.
D

HectortheInspector said:
The island is about 170 miles from Sevastopol.
Depending on the model, Harpoon has a 150 mile range.
Stick some Harpoons on it and the Black Sea Fleet become very nervous. They have about 20 miles of sea room to play in.
Click to expand...

Stick some Harpoons on it and the Russians will return the favour in spades.
K

I don't disagree that there are and have been a fair number of arrseholes in senior command positions over time. And while I have no doubt that Patrick Saunders has an excellent command of 'group speak' he will also have an excellent understanding of when 'bullsh1t' is being spoken. I think we are lucky to have him in the Army chair and the Sailor as CDS - both are extremely competent just at the time when competence is required.

Of course, there are a lot of things wrong and a read of Simon Arkam's 'Changing of the Guard' outlines some of the anomalies that are felt lower down the food chain. But there isn't an Army anywhere or at any previous time that went into a fight with everything it needed. Sometimes they had a navigator that knew his way around, sometimes they did not. Currently, whatever the situation the guys at the coalface can be sure they aren't going to get lost or head in the wrong direction. That's good enough.

Deaths wise not yet

We just don't know though & that's the problem every time Ukr troops arrive somewhere they find carnage, I for one would be happy if it never gets to that number but 1 million forcibly taken to Russia sort of suggests differently.

And DITTO as to duration if it ended tomorrow that would be brilliant.

HectortheInspector said:
The island is about 170 miles from Sevastopol.
Depending on the model, Harpoon has a 150 mile range.
Stick some Harpoons on it and the Black Sea Fleet become very nervous. They have about 20 miles of sea room to play in.
Click to expand...

But those harpoons would just get blown up in this island-sized game of ping pong, the harpoons can do their job in a safe place

twentyfirstoffoot said:
Stick some Harpoons on it and the Russians will return the favour in spades.
Click to expand...

Kinch said:
If he has accomplished a working knowledge of 'group think' it's because he has been in a lot of different groups
Click to expand...

*Bear with me, please, mods - there’s a ukraine relevant bit to come, but this blasted iPad tries to open a new post if I try to put more than one quote into the same post, and I need to get onto a different device (or post four posts in a row).

EDIT <several hours later & some intended comments made by others down-thread.>


twentyfirstoffoot said:
By removing Russian Forces they have re-established Sovereignty no need to reoccupy during hostilities and the Russians have learned although they might reoccupy they can not hold.
Click to expand...

Yep - critical point. The island is all-but untenable for the Rus forces, since anything they put there will get smashed by Ukr arty (and possibly, in due course, further air attack) which will out-range anything on the island. The Ukr have made clear their sovereignty, so the question now is whether the Russians will attempt some form of sea control using their submarines, although I suspect that before they knew it there'd be some sort of US assets provided to allow the Ukr forces to start delivering depth charges via drones...
Last edited: 30 Jun 2022

If at first you don’t succeed, just delegate.
B

Brooker said:
Yeah the balkans was horrible, my point is the scale of the genocide in Ukraine is factors worse (appreciate not trying to do point scoring here),
Click to expand...

Former Yugoslavia was a civil war Ukraine is one nation state being attacked by another?

holyphuc said:
Presumably that will effect the trajectory/range so they will have to practice and waste extra ammo?
Click to expand...

Probably all fall off when the rocket motor fires, a sad display of bad skills by the Ukrainians.
Last edited: 30 Jun 2022
"It was like that when we found it Sir"

Seen like that, it really does appear to provide a perfect sitting duck piece of target practice.
I wonder...when it's all over, if Ukraine would kindly rent it to UK as a holiday camp ( permanent) for Jordan etc.
I have a dream......
​

All things nautical today for Ukraine.

Real shame that it missed. Crew requested a change of grundies at the next FARP point.

Old Cloud Puncher said:
So what's this got to do with Ukraine? Basically Xi is no friend of Putin's because it is in China's interest to stay chummy with the West and Russia offers nothing that China wants this year or next or the year after. Russia is in a very short term disaster and is in trouble. Putin is desperate for high end electronics and other gadgetry from China for missiles and maybe some 152mm might slip over the border, but this only serves to make Putin more reliant on Xi. Having Putin as his bitch is exactly what Xi wants. Maybe there are some minor territorial easements along the shared border that Xi might find useful to have in exchange and will forget to give back.
Click to expand...

Yeah been saying the same for an age, there is no Russia China bromance, China has very little desire for any serious military conflict because they're not in a position where kit is concerned and even strategy.
So many examples, but you hit the nail on the head is the economics

$1 trillion of trade between USA & EU that feeds 1.5 billion, Russia has nothing that important for China at the moment.

The coal-fired stations are a distraction, China is also the world's largest producer of wind and solar energy, Chinese City Mayors are marked on pollution and they are also closing coal stations down and by 2030 could very well be bigger producers of clean Nuclear power, and if their artificial sun tech comes online that will be a game changer, meaning China is probably closer to achieving its carbon-neutral targets than many in the west are. Especially as Germany despite having perfectly useable Clean Nuc energy is going to use more dirty coal instead, thus screwing other countries which don't have the buying power of Germany
B

Yes, smoke from Russians destroying their kit. UKs proceed with caution expect island to be mined and booby trapped ?