Unconfirmed reports of a few fighters still in the Steel factory? 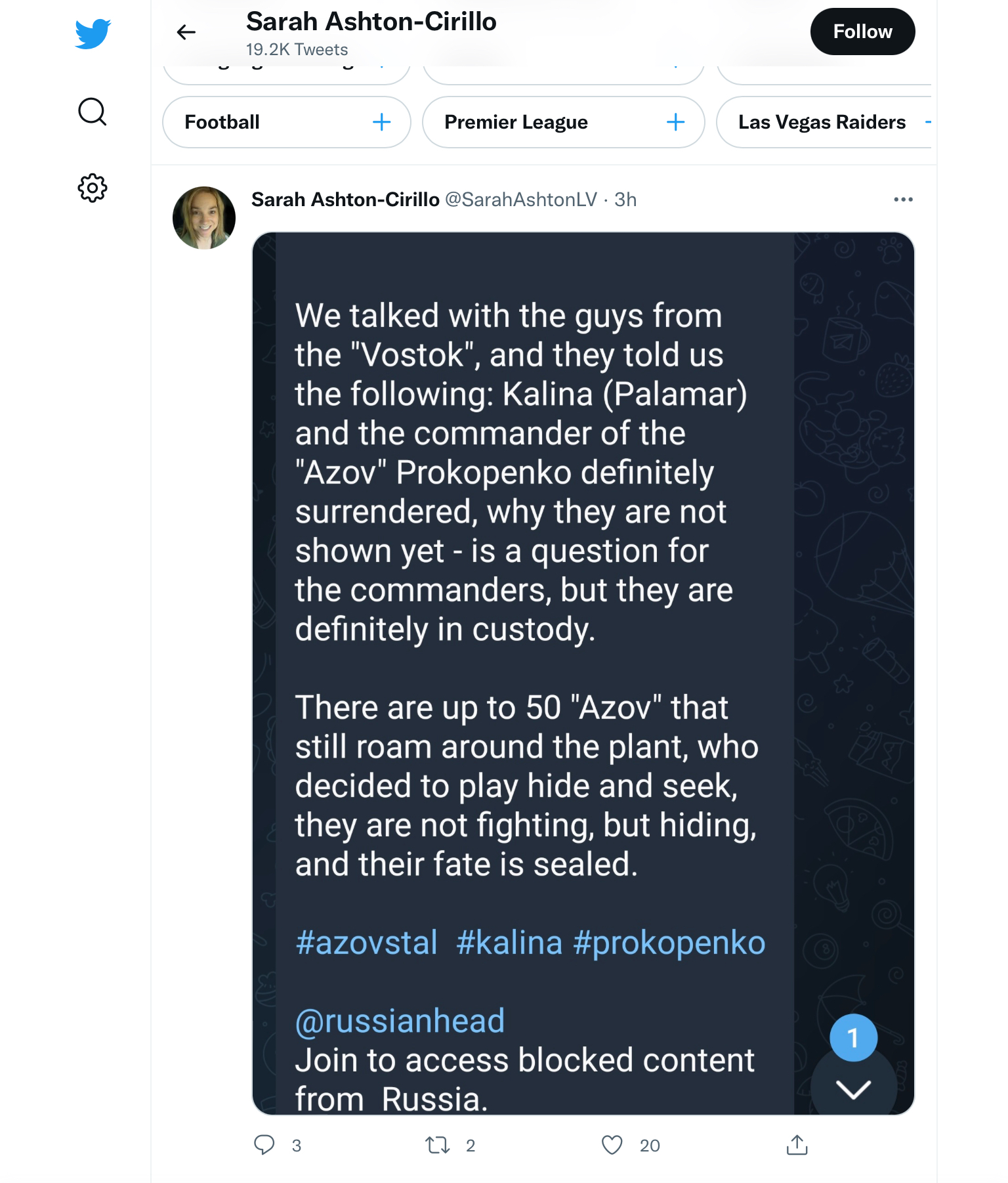 If at first you don’t succeed, just delegate.
E

Tricky1982 said:
Considering Russia has apparently gone 'all in' on this area they still don't appear to be making much progress. I hope the Ukes are making them pay heavily for every inch

They broke through at Popasna and how, we simply don't know. The media only report Ukrainian successes and the open source experts are going off what our media report. I can guess the Ukrainians had enough of been pounded and packed up and the rules dictate you reinforce success and yet the penetration is absent a second echelon?

The disbelievers will rant the Russians are down to their last T-62s and horse drawn davidka(homemade mortars) and no second echelon exists. Its my view, this is an explicit bespoke tactic and the Russians simply refuse to commit armour to be ambushed and instead the advance halts and all the supporting firepower shifts to the next bridgehead and probably the area north of Siversk will get a week long dose and the Russians mean to fight this war all summer. The daily attrition rates which we will never know about, must be very alarming for the Ukrainians as I've noticed there tone has become deranged and desperate sounding again and MLRs is what's needed, I don't know why they don't ask for the shirt of my back and a nuclear sub.

On tactics, I once read a book(they do exist) written by a German called Erhard Raus who wrote a book for the Americans about fighting in Russia. He covered something called the Snail and Scorpion Offensives which were explicitly designed to advance by local attack. IF you couple that tactic with the Russian's older theory of consecutive offensives and heavy artillery you have a winning combination in my opinion.

The second echelon does exist, but its rotating units to the frontline and regenerating worn out units. It won't be committed until were back to strategic level manoveure warfare and that I expect after the salient has fallen and the Russians want to push westwards and accept casualties again.

Condottiere said:
An outstanding piece by Anne Applebaum in "The Atlantic". arguing that Muscovite Russia must be thoroughly defeated in its Ukrainian War. The concluding paragraph neatly encapsulates the argument:
Click to expand...

Once again, the massive irony of their anti colonial posturing to get their tentacles into Africa.
"Justice tastes like hairy Bovril!" - The Righteous RTFQ

In Europe he said.

Ursus Major said:
To be fair they did, just not recently…
Click to expand...

And ironically they seem reluctant to see German tanks roll into Ukraine
Join me at Torn-City - MMRPG , meet interesting people and put them in hospital, so join up here: https://www.torn.com/2322286

This reminds me of a story I once read in a "Pan Book of Horror" about a journalist who begins to notice that the groups of rubberneckers that crowd around the victims of fatal accidents are comprised of the same people.

In this cut of that video, at the end there is drone footage of the launcher and the target

loofkar said:
In this cut of that video, at the end there is drone footage of the launcher and the target

Aside from the fact they never bother with cam cream or use of natural cam they look like professional soldiers, certainly more so than the Orcs do who just look like a rabble.
NULL

Well well, who’d a thunk it. Euronews made mention of the NATO Russia founding pact from 1997. This got me digging and whilst reading it up I found this. From Wikki.

Karaganov is known as the progenitor of the Karaganov Doctrine, which states that Moscow should pose as the defender of human rights of ethnic Russians living in the 'near abroad' for the purpose of gaining political influence in these regions. After Karaganov published an article advocating this stance in 1992, Russia's foreign policy position linked Russian troop withdrawals from the Baltics with the end of 'systemic discrimination' against Russians in these countries.[3]

In addition to his Doctrine, Karaganov has advocated for a united Sino-Russian strategy to unify a Eurasian bloc. He argues that the Eurasian Economic Union (EEU) and China's One Belt One Road Initiative (OBOR), will work together to promote economic integration throughout the region.[4][5] Many experts[who?] disagree with this judgement, claiming that China, as a far more powerful economy, will simply dominate this Eurasian bloc. This would counter Russian ambitions to regain their foothold as a global power.[6]


Signed back in 1997, I had completely forgotten about that.
NULL

Tricky1982 said:
Aside from the fact they never bother with cam cream or use of natural cam they look like professional soldiers, certainly more so than the Orcs do who just look like a rabble.
Click to expand...

for the first 10 years I was in the IDF cam cream didn't exist.
They started issuing it in the nineties.
We managed fine without it actually.
Last edited: 27 May 2022

loofkar said:
In this cut of that video, at the end there is drone footage of the launcher and the target

A bit more footage here as well, the BTR survives the first hit and scarpers into the woodblock where the Uke cut offs were obviously waiting and it gets smashed on the second hit

Listy said:
It occurs that the island isn't that large, what's the chances of letting the Russians stuff it with high end kit to prevent a repeat of the last attack, then you go and blanket it with MRLS?
Click to expand...

I get the feeling that is what dropping that bridge across the mouth of the Dniester was about. The only other road in that part of the world that could be used to get equipment down to the mainland opposite Snake Island skirts transnistria and then goes through Moldova and their law forbids foreign troops transiting their country IIRC.

The only way to get anything down there would be if they could ferry it across the Dniester or manage to bridge the gap somehow.

loofkar said:
This reminds me of a story I once read in a "Pan Book of Horror" about a journalist who begins to notice that the groups of rubberneckers that crowd around the victims of fatal accidents are comprised of the same people. 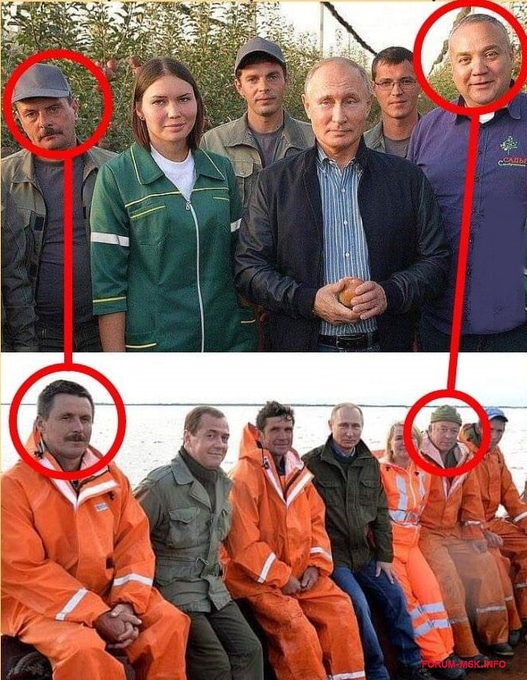 Fox3WMB said:
Well, I think a lot of people here said this over a month ago.

The media is a bit like that slow second cousin you try to avoid people noticing you have anything to do with.
Click to expand...

Anne's been fairly strong on this since "forever"
When routine bites hard, And ambitions are low, And resentment rides high, But emotions won't grow...
By voting on this post with a Dumb I confirm that I am a more than a bit stupid and an all round loser.
D

headgear said:
from a defensive dug in position I would put a Chieftain with TOGS up any day against the Russian tanks we're seeing in Ukraine - yes the Engine was crap but the Gun, Thermal and GCE are pretty decent against Russian pish, even at todays standards and it was designed to take out T62, T-72 etc so, not as much of disparity as people may think - obviously, if you tried to use it for lots of manoeuvring then I would say don't bother!
Click to expand...

You'd almost certainly need to replace nearly all the TOGS components because it relies on High Pressure Pure Air to work, and by the time it passed away the engine was pretty reliable if you had a decent crew. Any Chieftain that existed in something like a Battleworthy state today would also need a lot of electrical wiring replaced as it deteriorates over time.

I take your point however that, at any given time of Chieftains' life I'd have preferred it against any MBT the bastard russians could have put up against it, also our tactics were and still are way better than theirs.
D

Dads203 said:
Unconfirmed reports of a few fighters still in the Steel factory?

Sounds a load of tosh to me I'm afraid

Tricky1982 said:
A bit more footage here as well, the BTR survives the first hit and scarpers into the woodblock where the Uke cut offs were obviously waiting and it gets smashed on the second hit

Not sure it was smashed, it looked under control when it disappeared under the canopy - there is no subsequent hit after that until the video runs out?
Slava Ukraini!