Apologies if this has been discussed elsewhere but I couldn’t find it. Does anyone know if there are plans to replace the current LandRover’s in use with British Forces. I was with a unit that was one of the first to receive the LandRover Defender (Wolf) back in 2001, so they are now 20 years old, whilst the ones I’ve seen knocking about still look in good shape, I’m thinking the MOD must be thinking about replacing them, but with what?
The new Defender? It looks too fragile and pretty to me, and expensive, too much like a Chelsea tractor and not capable of being a viable successor. The Merc G wagon, again getting on a bit now. I’m guessing it would need to be a stable weapons platform too, WIMIK being another LR variant that I assume will need replacing.
Will the MOD go down the route of a specialist vehicle to replace the LR that is light but armoured, able to survive IED’s, RPG’s and land mine strikes, perhaps “V” hull, given the controversy of Snatch LR’s in Iraq etc.
This is purely an idle thought and just wondering, so over to those that know.
is stupidity a right or a privilege?

I'm pretty sure there is a thread that touches on this, but in general terms there are various comparable 4x4 general utility vehicles:
Benz still makes the old school G.Wagen Wolf for militaries, Canadians, Aussies, Norwegians, Germans and many others still use it I think?.
There is of course the Toyota Land-Cruiser "Troopy" (albeit not officially sold in this country so far as I know).
Jeep Wranglers look pretty good for it although I hear bad things about their build quality and durability.
There is the upcoming Ineos Grenadier which looks to be along the lines of a well thought out G.Wagen/Troopy type of thing.
And of course I don't see why the remaining Defenders can't just be rebuilt, modded and upgraded almost indefinitely, they can be stripped with a couple of 1/2" spanners (and a family size packet of WD40).

As to the military specifics? You'd have to ask someone who's been in.

And. Yes of course commercial pick ups are as good 90% of the time and they tick a lot, if not most of, the boxes, but the independent front end with cart sprung back set up is just not as good off road, they can't follow where long travel coil sprung axles go. Not beyond a certain point anyway.

The best option would be Toyota.

Jankel UK has a wide range of MIL Toyota to offer.

And availability of spares and technicians all over the world...not to mention reliability

Gallery Guru
Be a hanger somewhere full of new rovers, never touched, be sold as soon as the last working one leaks it’s last gallon of oil.
T

mechanicalhorsetrough said:
. . .
Will the MOD go down the route of a specialist vehicle to replace the LR that is light but armoured, able to survive IED’s, RPG’s and land mine strikes, perhaps “V” hull, given the controversy of Snatch LR’s in Iraq etc.
. . .
Click to expand...

"Light", "armoured", errrrmmmm. I immediately think of Ajax, because it is supposed to be survivable but isn't very armoured and isn't very light. An indestructible vehicle doesn't exist, but for the threats you mention they will not be small or light. Now that IEDs are the worldwide weapon of choice will Rovers be replaced by white-fleet and anything warry will be sorted out by warry vehicles?
NULL

Toyota probably would be the best as, with a bit of thought, the engines and transmissions could probably shared with the white fleet and the more "warry" stuff.
This would help with the logistics and mechanics side of stuff and make it simpler, so more behind the lines folks would have easy to drive, user friendly Hi-Luxes, more off roady tasks could be handled by Land-Cruisers and, I guess some could be lightly armoured Jankels if that is still useful in the day of IEDs?
At any rate all sharing the same engine, gearbox and transfer box rather than three different types which I'm sure the mechanics, techs and logistics guys would appreciate.
Obviously for the really heavy duty armoured stuff I haven't a clue but for the more light duty shifting the odd pallets, crates, boxes and more light recce stuff a range of Hi Luxs and Cruisers with parts commonality seems right to my civilian eye and looks cheap enough to keep the politicians happy? Modularity would be handy too.

The French army is happy with its Toyota 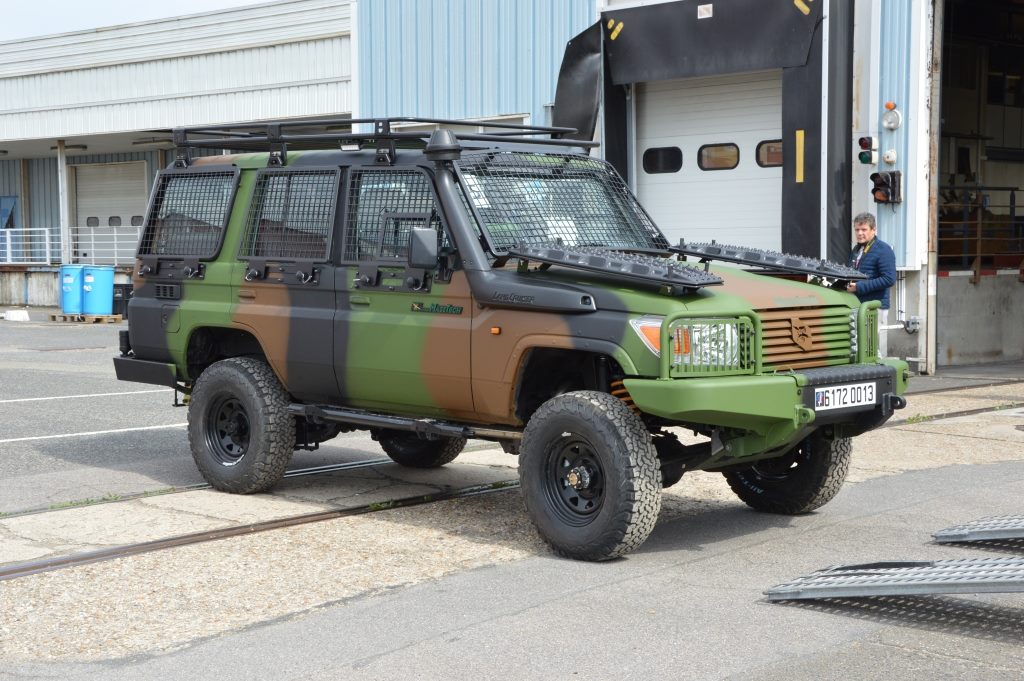 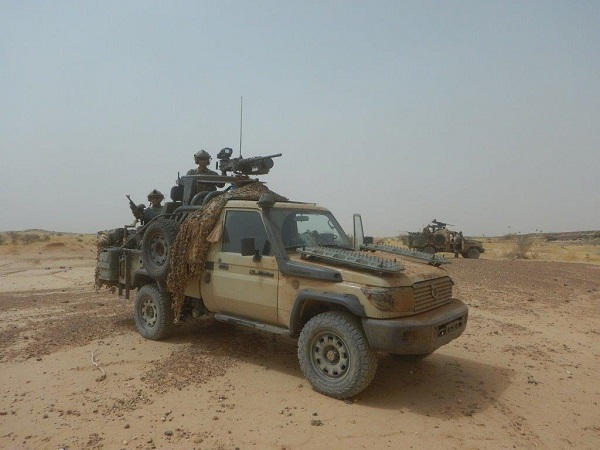 Tesla Cybertrucks. Bugger-all practical use in the Sahel but at least we'll be able to signal our environmental credentials to AQIM.

Maybe i'm a cynic but I think they'll just run the LR fleet into the absolute ground and fill the gaps with expensively hired Ford Rangers or Toyota pickups from someone like Babcock at a generous day-rate. I do wonder what civi options will be available in 15-20 years though given the relentless drive towards higher safety standards, leccy powertrains and the demonisation of SUV drivers making new models uneconomic for the major manufacturers.

cowgoesmoo said:
Tesla Cybertrucks. Bugger-all practical use in the Sahel but at least we'll be able to signal our environmental credentials to AQIM.
Click to expand...

We could just buy a fleet of expensive electric vehicles and park them up as there virtually no charging points on any camps to drive them too.

"MoD saves money on electricity bill." Will be the response when it finally gets in the press.
CC_TA

Kit Reviewer
Book Reviewer
I would imagine that the poor performance of LR’s to survive IED blasts has pretty much put paid to any operational use they had.

The future is armoured vehicles like Jackal and Foxhound.

My bet is that cost cutting and H&S measures means that when the current Landy fleet dies, the day to day workhorse stuff that they’ve always done will just be done by white fleet vans and minibuses. Pretty much all UK training areas have tarmac roads anyway and for places that don’t, they can just use the above mentioned Jackal and Foxhound or hired in pick ups as @cowgoesmoo says above.

Won’t be long before some twat in a Hi Viz vest says Landies are no longer to be used for Peace time operations or training because they don’t have air bags or some shit.
One cannot begin to fathom the immensity of the **** I do not give.

jarrod248 said:
Be a hanger somewhere full of new rovers, never touched, be sold as soon as the last working one leaks it’s last gallon of oil.
Click to expand...

cowgoesmoo said:
Maybe i'm a cynic but I think they'll just run the LR fleet into the absolute ground and fill the gaps with expensively hired Ford Rangers or Toyota pickups from someone like Babcock at a generous day-rate.
Click to expand...

Albeit cheaper than paying a soldier to fix them for 22 years and then a pension for a further 40.
Nothing can stop me now, I just don't care anymore.

Life’s but a walking shadow, a poor player that struts his hour on the stage, then heard no more. A tale, told by an idiot, full of sound and fury, signifying nothing.

When I asked about charging points for a potential purchase of a electric vehicle I was told: "Anyone caught unauthorised charging will, excuse the pun, get charged. Best we can do at the moment is a bale of hay."
CC_TA

One of those new Defenders passed me an hour or so ago. what is it with that random square in a place that ought to be windows.

Like I say there's no practical reason existing Defenders shouldn't be rebuilt, and modified ad infinitum.
Sure you'll end up with a my grandfather's axe kind of situation but so what? My 90 is about 5 different vehicles but I've got it where I like it, runs like new (and faster). It's not like I can go out and buy anything as capable and easy to maintain.

jarrod248 said:
Be a hanger somewhere full of new rovers, never touched, be sold as soon as the last working one leaks it’s last gallon of oil.
Click to expand...

Think Brightwells at Leominster has been quietly selling those off over this last year, along with the odd CVR/T and spares.
"A politician is an arrse upon which everyone has sat, except a man."- e.e. cummings.

Maninthestreet said:
One ot those new Defenders passed me an hour or so ago. what is it with that random square in a place that ought to be windows.
Click to expand...

Jeez man, it's all about surface appearances nowadays, function follows form not vice versa. It's the 21st century for god's sake!
That said I agree, I don't get why they did such a half arssed job of styling it to look like it's related to the Series and Defenders. VW, Fiat and BMW Mini managed it with their icons.

Few years ago I was at Babcock in Colchester, they’d just recycled a load of LR 110 Ambulances. All low mileage and to be reissued, they’d been given a crew cab and a tray back. Came from the cut backs, ie don’t need all these Ambo’s anymore so turn them Regimental hacks.

Another question for Sparkies