This is an interesting Book, from the Helion publishing house, in a series ‘From Musket to Maxim’. It tells the story of the creation and progress of the garrison schools established in 1812. Their purpose was initially to educate soldiers’ children ‘to keep them out of mischief’, and later to educate soldiers, in a time when many could not read and write, so that their chances of promotion were improved.

The author has completed a lot of research in regimental and government records. There are lots of photographs, and many stories which would horrify modern educationalists. For example girls were taught sufficient mathematics to become housewives, and boys were taught carpentry, tailoring and woodwork in addition to ‘all four’ branches of mathematics. The challenges to Commanding Officers of appointing suitable Sergeant Schoolmasters, and later schoolmistresses from the community of Army Wives, are recorded, along with the various methods used locally and encouragement by politicians to improve the standards of teaching. The debates over whether Anglican Christianity or non-Denominational Christianity be the foundation of the curriculum would cause horror today, as would the appointment of local Indian staff to teach the children Hindi and Urdu if they were at a Regimental School in India. I imagine that the children were just pleased to get some sort of education, and improved likelihood of employment, particularly as education for civilian children was much slower in being implemented nationally.

This particular system came to an end in 1914, with the separation of adult education and child education into separate functions with separate chains of command, standards of monitoring and purposes. I imagine this reform to have created the embryo of the BFES, from which I benefited. It certainly benefited my maternal Grandfather, and my Great Uncle who both passed Army Education Certificates, introduced by these reforms, during their early careers as regular soldiers. 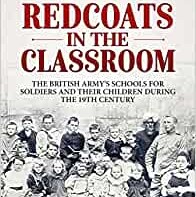 The book covers a wide scope of events both educational and political regarding the education of 19th Century children, and a little repetition creeps in. This doesn’t detract from the overall interest of the topic.

Sadly, I note that having done all this research and presented it in a readable fashion, the author passed away from Covid-19. His widow and the Series Editor completed the process, which I think is a good tribute.

Amazon product
Last edited by a moderator: 8 May 2021
Click to expand...