Moderator
Book Reviewer
Over to you RC bods, if this peters out it'll be unstickied never to be seen again in the sea of @daz and @SPROCKET321 never ending production line of stuff spam!
NULL

Started off with the usual Tamiya cars with their brushed motors and nicad batteries and had a lot of fun. Then thought it would be great to fly. Built a trainer and had a couple of lessons. Made a rookie mistake and forgot to charge the receiver battery. It flew far better without me in control and disappeared into the distance never to be seen again! One thing or another happened and many years later gave it another go and taught myself to fly using lecci power this time. At last count have about 30 aircraft of different shapes and sizes in the 'hanger'. My current fave is my SE5A.
A member of the Busted Knuckle Garage. We fcuk up things so you don't have to.

I bought a glider and crashed it 3 times before I lost the desire to crash it again. Got a drone and mess about with that.

Unrelated I am building a PC based Flight Simulator Cockpit for the F-18C and whilst building this I have built my own CNC based on a Dremel which will soon be upgraded to a proper router. Also will buy a 3D printer.

The Cockpit was always going to be second place to make my own RC aircraft from plans whilst I perfect my CNC skills and the accuracy of the machine.

"Hi everybody....My name is Beagle and I build toy aeroplanes"

waits for everyone gathered to say "Hi Beagle"

thought I would get this thread off the ground (sic), with a short introduction
I have been building planes from about the age of 8, on and off , off for a while whilst things like bringing up a family and working for a living did their best to get in the way...anyway , been doing it fairly regularly since my demob in 1993 , been a member of the local club ,but now I prefer to fly by myself , or with a couple of mates
I build and fly mainly Electric , and gliders ,(living 3 miles as the crow flies from East Lomond hill I was flying slope from there for a few years , but I had a dicky ticker problem and SWMBO forbade me to go there alone , and when she did go with me it was like a kid in a car asking "can we go home yet" so haven't been up there for a few years
I had a couple of years , as the sole agent for GWS foam kitsimporter into UK , and had a few decent shipments in which were generally sold on ebay and facebook, and through contacts, but they've now gone forever but I have kept hold of sonme of the kits so now the owner of 2 Harvards 1 A10 1Beaver 2 BN Islanders 1herc, 1 large tigermoth 1 pico moth 2 Formosas an unfinished FW190...plus other foamies 1 asw17 1 hobby king wilga 1 HK tiger moth (I like Tiger moths) 4 LIdl chuck gliders converted to rc slope a HK lancaster, a "The Twins from RC groups aKK Invader converted to 2 channel and currently building a RC plans Pteroway self launch flying wing ... 2 Zagis and a couple of "I may get round to fixing them sailplanes
anyway here's a short film from YT of my very old and still flying ,very tatty twins


now , over to you guys
Ignorance is bliss, yours, however , is disturbing!

I do have a hankering for building a County Class destroyer like this: 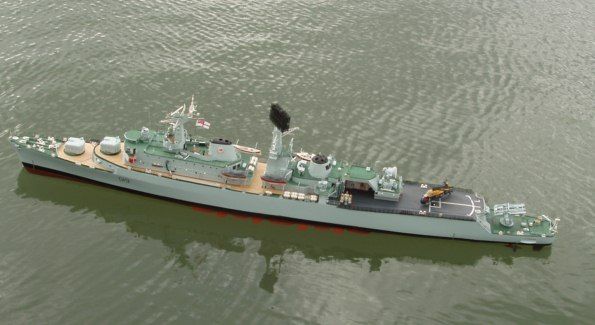 Helm said:
Over to you RC bods, if this peters out it'll be unstickied never to be seen again in the sea of @daz and @SPROCKET321 never ending production line of stuff spam!
Click to expand...

Erh. You have noticed I've not produced "anything" lately have you not?
"Some people are like Slinkys...They're really good for nothing, but can bring a smile to your face by pushing them down a flight of stairs."

daz said:
Erh. You have noticed I've not produced "anything" lately have you not?
Click to expand...

Biding your time eh? The only experience I have with RC stuff is a Tiger from Heng Long? and some cheapies all for the laddo.
NULL

Hey, Thunderbox, that sounds awesome! Got any pix??

Do, it Dark Nit, you know you need that fix!
A member of the Busted Knuckle Garage. We fcuk up things so you don't have to.

I’ve dabbled with RCs from time to time

dingerr said:
I’ve dabbled with RCs from time to time

Wow! Amazing!! Funny enough I was watching A Night To Remember last night.
A member of the Busted Knuckle Garage. We fcuk up things so you don't have to.

dingerr said:
I’ve dabbled with RCs from time to time

Somehow, I suspect that you're not going to get many takers for any offers you might make to help with the wiring
"Some people are like Slinkys...They're really good for nothing, but can bring a smile to your face by pushing them down a flight of stairs."

Any arrseres going to do that with a Belgrano?
Black Life's Matter....... but not to me

OK , it's I'll show you mine if you show me yours time ( just to get the thread really going )

this is my Hobby King Mini Skywalker with a 1900 Blue Wonder outrunner .... Welcome to the world of "shit your pants" flying , great as a racer dangerous as an intermediate model , takes a Tessa Sanderson type javelin throw to get it gliding before you open the throttle , then point it up and get as high as you can until just before before you lose sight of it , and close the throttle and glide for a couple of minutes a bit like flying the ME163 komet and repeat... roll rate is frightening, speed flat out and a climb will bend the wing and it has a carbon tube glued into it... surprised it has lasted so long... cost £15 squid couple of years ago , think they are still available 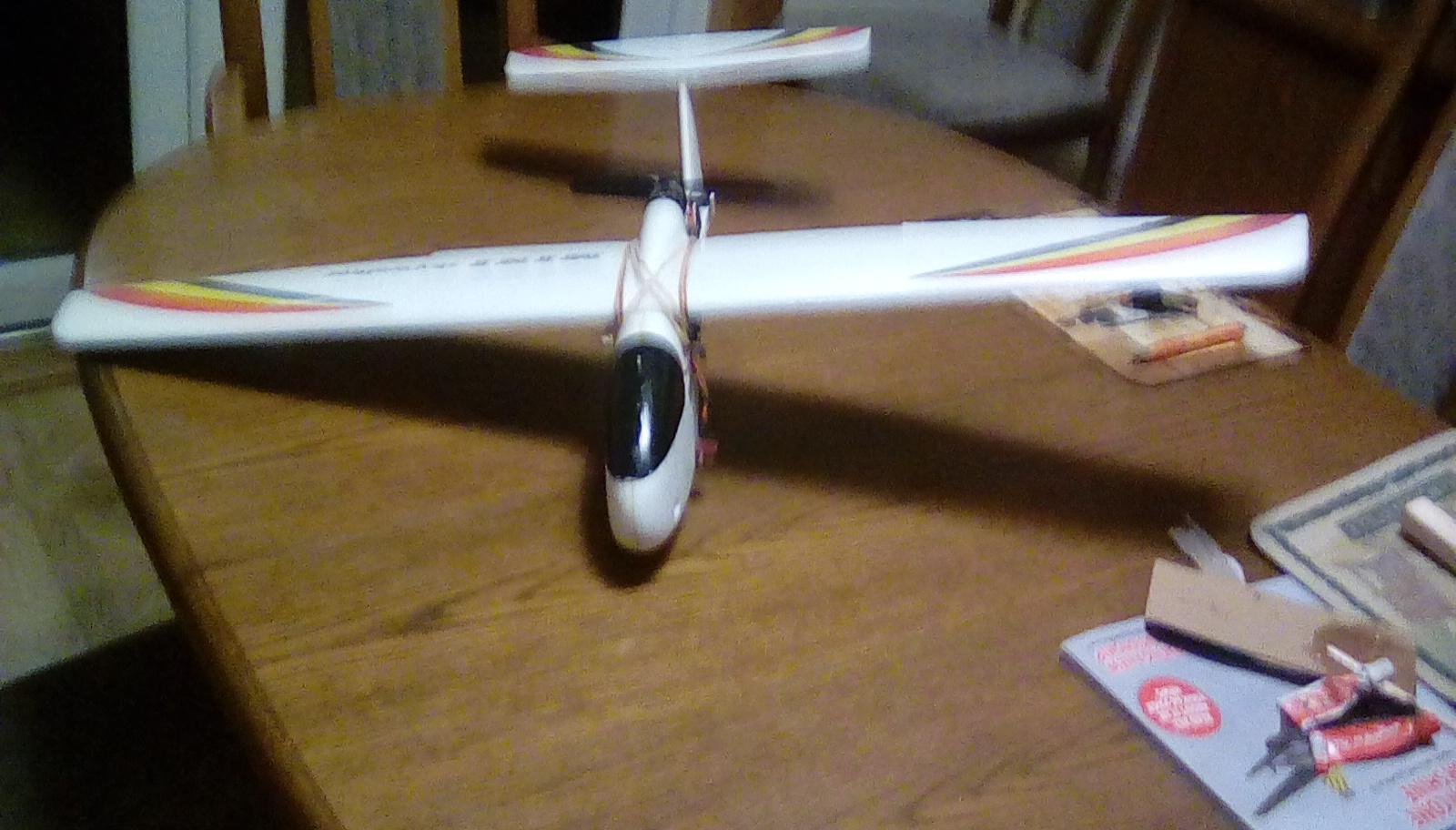 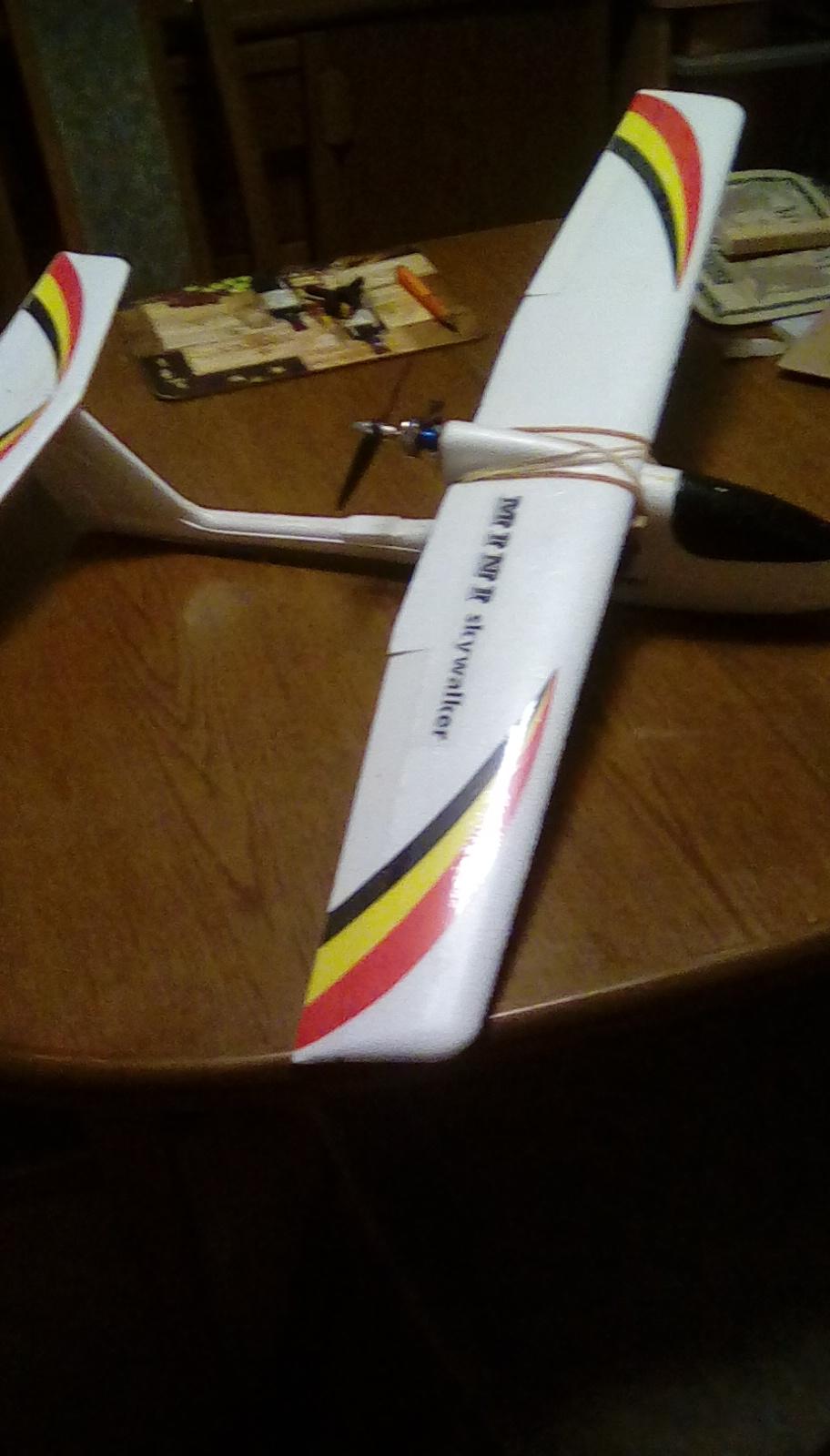 and a final bit for tonight, this is the film that inspired me to build my version of the twins

thousands have been made

Not one of mine unfortunately, but one of the Dawn Patrols 1/3 scale Fokker DVII's. The mount of Hermann Goring I believe. They really go to town on the scale appearance of their models. 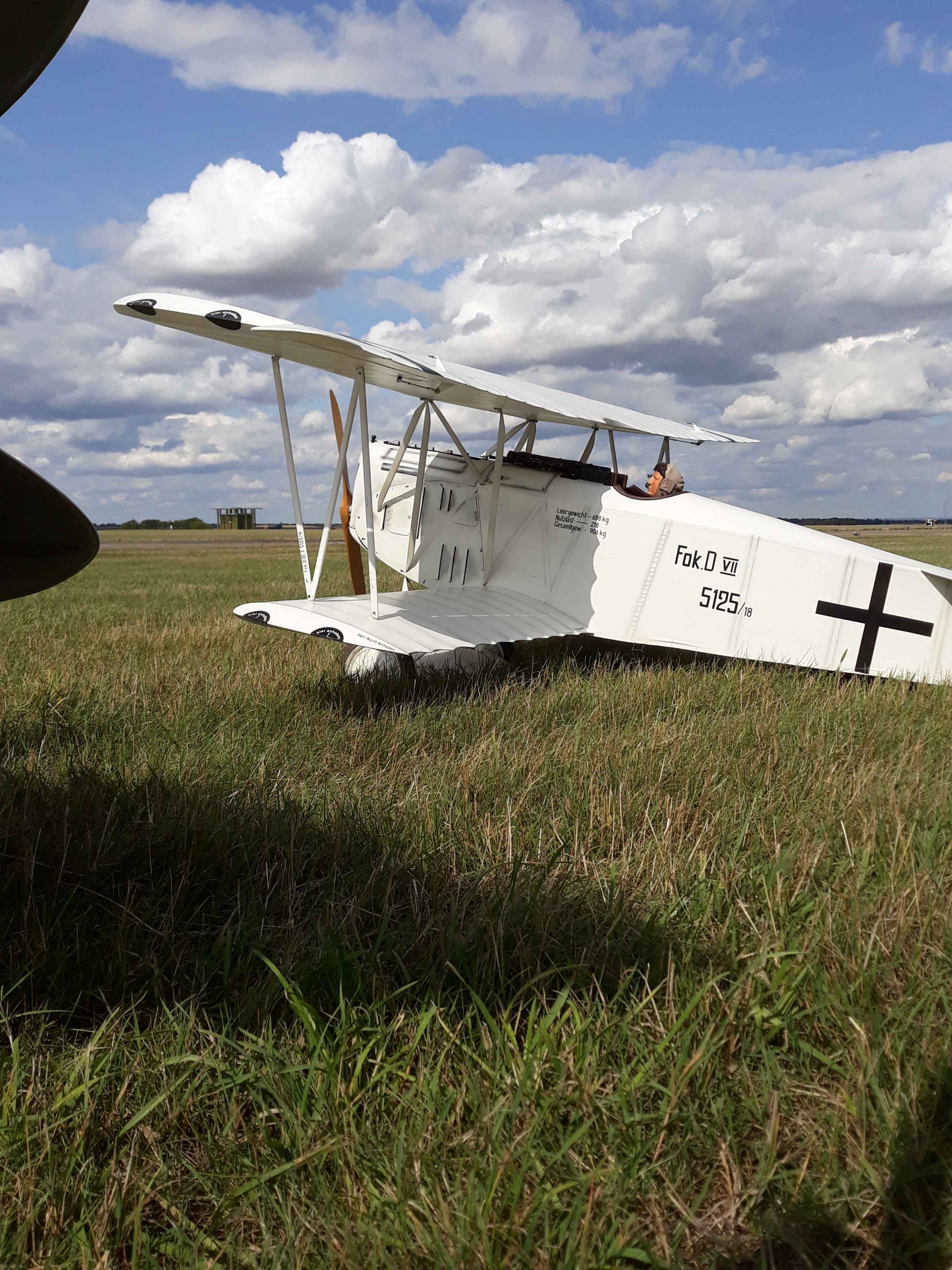 Photographed it at the Nats.
Last edited: 30 Sep 2018
A member of the Busted Knuckle Garage. We fcuk up things so you don't have to.

Moderator
Book Reviewer
What's a good but realistic plane to start with? And FFS don't tell the missus I'm contemplating yet another expensive hobby
NULL

high wing 3 channel rudder elevator throttle , electric will probably cost less in the long run , if you go for a foam plane , make sure it is EPP (I think that is expanded poly propylene) which is squashy, and will return to the original shape after a minor "arrival" and not EPS, expanded polystyrene which turns into a snowstrom of bits
Maybe a glider ... I have a ASW 17 , came with motor speed controller servos all fitted , just needed a battery and the Radio gear , all for under £100... probably better with a basic rudder evevator glider, you'll still need a bungee system , or an energetic child to run and tow it up on a towline
Or go down the traditional balsa ply wood route . probably best to take a wander up to your local club one sunday and speak to the regulars ....and most important , join one of the societies and you'll get insurance , don't fly without it
the initial costs can be as much or as little as you want topay , typically decent transmitter/ receiver about £100 ish kit £60 ish battery £15 (and a charger)depends on size required and speed controller £15 ish, or buy a 2 or 4 stroke motor and fuel and starer kit

It's like taking up any sport or hobby what you are willing to pay is entirely your own choice (I personally am as tight as a gnats chuff and usually go for the cheaper options , and spares such as servos and electric motors from china are pretty good on the whole and a lot cheaper than buying from UK)

DON'T BUY A SPITFIRE, until you've got a few trainer models under your belt, you will trash it , same goes for most scale type planes and it does take years , and lots of cash to buy and successfully fly that miniature twin gas turbine English Electric Lightning

I am not to be held responsible for the divorce
Ignorance is bliss, yours, however , is disturbing!

Something like the Hobbyking Bixler is good. Cheap, lecci powered, good wingspan, pusher prop so less likely to break, and foam, so can glue together after a crash. You will need radio gear. All my stuff is Spektrum but you are spoilt for choice really. 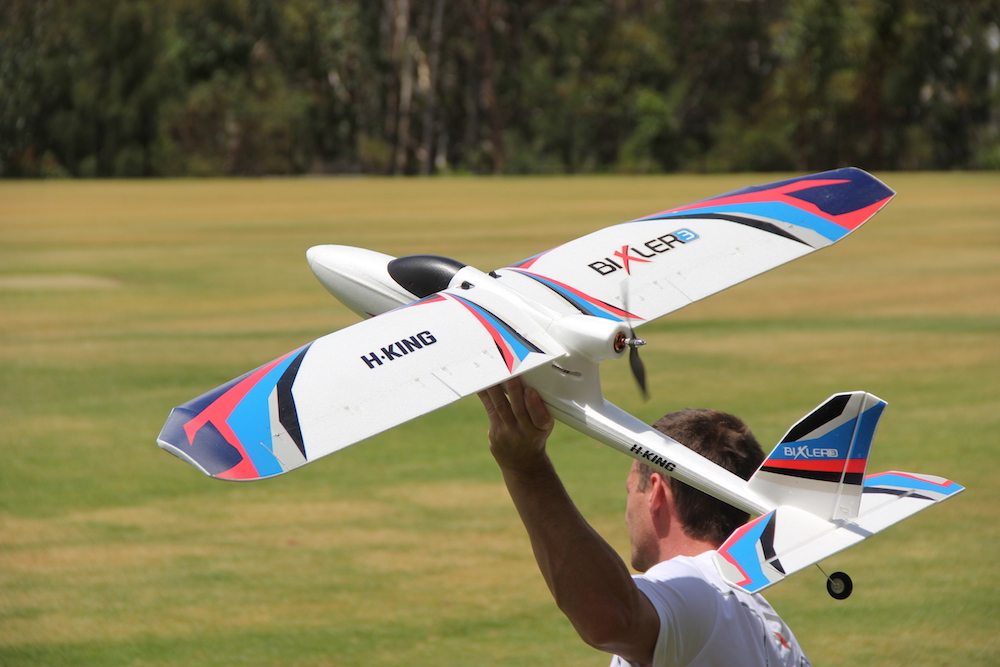 I taught a few people to fly with one of these, an ST Models Discovery. 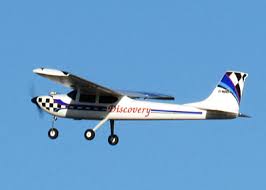 A member of the Busted Knuckle Garage. We fcuk up things so you don't have to.