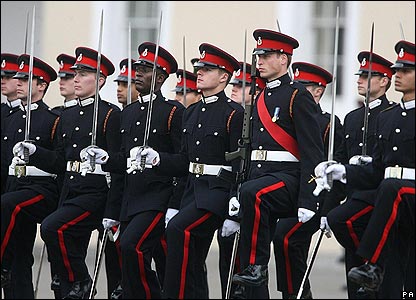 In all seriousness, well done to them all.
It's time for British Independence.

Must have been a tough course, they're all on cruthches

Out of interest, at Sandhurst, whats with the Sashes?
"Anything worth doing is worth over-doing...moderation is for Cowards"

Souveniers for anyone who's managed to nail a beauty queen.

Praetorian said:
Out of interest, at Sandhurst, whats with the Sashes?
Click to expand...

I believe it is part of the cadet government Junior under Sergeant, junior under Officer Junior under Corporal.
Rifle firing OK, Rifle stops. "SHIT"

Praetorian said:
Out of interest, at Sandhurst, whats with the Sashes?
Click to expand...

No, they are worn by the markers - these are the tallest guys and hence on the end of the ranks. The JUOs do not march with the others and they have gold braid on their eppaulettes.

1) How many JUO's are there?
2) If William was indeed a "Bladerunner", why wasn't he a JUO?
"Anything worth doing is worth over-doing...moderation is for Cowards"

Not sure why William not JUO - thought this may imply 'bladerunner' status slightly inflated.

He cant have everything, Hes got chocolate money on his uniform before anyone else, what more does he want

well done to him. Pity they vetoed him joining the Paras.

Fallschirmjager said:
well done to him. Pity they vetoed him joining the Paras.
Click to expand...

He's going where the real rich orficers go, and why not go to 'grandmama's' cavalry Regt? He can still do P Coy and be rolled airborne in the HCR.
Blue skies & soft landings

M3.... still making a splash on the continent for a few years yet!.

I don't think they'll let him go airborne HCR either as it would be too much of a risk for a future King.

Saying that, Prince Charles is in the Paras isn't he!

Good on him, at least he's had the Gonads to train and pass out, did his Father serve or does he just wear the gear?

Just wears the gear. Even has the audacity to wear a denison smock! Necky fcuker.

His Daddy was a sailor for quite a long time.
Better to be a Has Been, than to be a Never Was!

Watched some of the parade today.

How can they look smart as fcuk today but when they tip up at their units they look as if they entered the drill square through a hedge, got dressed in the dark and march with the co-ordination of a monkey on acid?

All in though well done to all our new orifices

Rapier said:
His Daddy was a sailor for quite a long time.
Click to expand...

And his daddy's daddy.
And his mummy's daddy went to Dartmouth as well.
I write down everything I want to remember. That way, instead of spending a lot of time trying to remember what it is I wrote down, I spend the time looking for the paper I wrote it down on.

Hmm, Maybe Charlie is one of the usernames hidden in the murky depths of the Rum Ration...

Then again, probably Arrie and Bill are cunningly disguised in

Gundulph
Let us Design & Produce your coin - Press the image...

Fallschirmjager said:
Just wears the gear. Even has the audacity to wear a denison smock! Necky fcuker.
Click to expand...

when ones mama owns the country one may wear what one wishes!!

seriously though did he do P coy?

I remember seeing a film he made, when I was a wee nipper, when he was commander of a mine sweeper, all he did was take the piss out of himself which is top hole as far as one is concerned!!

as a side note and back to topic, why does young Wills have a gong already?
we came, we saw, we binned it!!