The Queen has been graciously pleased to approve the following awards of The Queen’s Gallantry Medal and for the publication in The London Gazette of the names of those shown below as having received an expression of Commendation for Bravery.


The following received the Queen’s Gallantry Medal for their actions during the attack by insurgents on the British Council Compound in Kabul, described below: 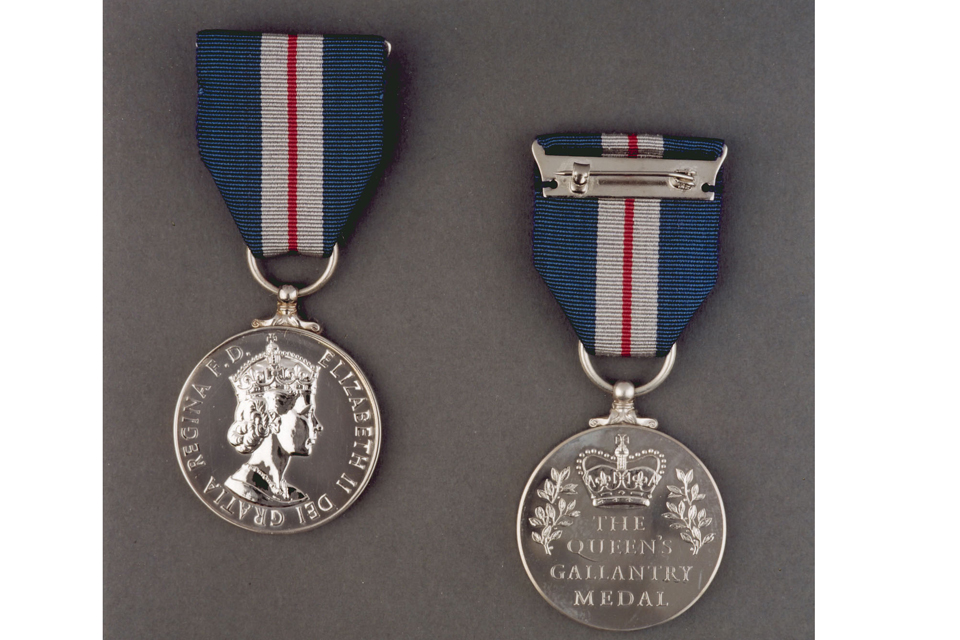 The Queen’s Gallantry Medal is the third level civil decoration of the United Kingdom. The medal is awarded for exemplary acts of bravery.
Queen’s Commendation for Bravery


On 19 August 2011, the British Council compound in Kabul, Afghanistan underwent a complex attack involving 2 Suicide Vehicle Borne Improvised Explosive Devices and an assault by 4 heavily armed insurgents. At the time of the assault there were 2 female staff asleep on site and the compound was protected by 4 armed Gurkha guards, 6 unarmed Afghan National security staff, and one British National security manager/bodyguard, all in the employ of Group 4 Security. During the course of the attack, 3 of the Afghan National security guards were killed by small arms fire, 3 others were wounded by blast and small arms fire but survived, and 3 of the 4 Gurkha guards were also wounded. The 2 British Council staff and security manager survived having endured 7 and a half hours locked in a safe room within the main building.

The 500 kg first bomb detonated at the front gate to the complex totally destroying the gate and internal security barriers. At this point Shayam Limbu, the Security Supervisor and 2 Afghan national staff were wounded and Janga Gurung in the gun tower received burns. Two insurgents then entered the main gate area and proceeded to engage the CCTV room with small arms and grenades. At this point Shayam Limbu was wounded and he then received a gunshot wound to the head. Nevertheless, he stayed in the guardhouse area and protected the wounded Afghan National staff until he was rescued. The insurgents proceeded to the security changing rooms and shot to death the 3 Afghan National security guards within. They then attacked the gun tower with small arms and grenades wounding Janga Gurung. Two insurgents then made their way towards the second compound, accessed through a doorway, and it was at this point that they engaged Deepak Thapa, who returned fire killing one of the insurgents before he withdrew to the main building, where he met Jeetman Magar.

Concurrent with this action, the security manager Hameed Choudhry had gone from his bedroom to one of the staff bedrooms and taken the staff member to the safe room in the main building. At this point the second large bomb detonated on the road outside the complex. The second female staff member had already taken herself from her bedroom in the main building to the safe room. Hameed Choudhry ensured that both members of staff were in the safe room and then proceeded to brief Deepak Thapa and Jeetman Magar on further defensive measures. He then entered the safe room himself and stayed with the 2 members of staff for the duration of the battle. Throughout this time, he maintained an open mobile telephone link with the British Embassy operations centre, keeping them informed of the exact situation. This included detail of insurgent movements as well as providing intelligence of assistance to the rescue team. He was a calm and reassuring presence in the safe room.

Deepak Thapa and Jeetman Magar guarded the safe room access for about an hour but then had to withdraw as the insurgents started to throw grenades into the building to gain access. Deepak Thapa and Jeetman Magar withdrew to the roof space where they remained until they were able to evacuate some 7 hours later. Due to their swift action and response to the attack, precious time was bought for the staff and Hameed Choudhry to make their way into the safe room before they could be attacked by the insurgents. Jeetman Magar sustained shrapnel wounds to his leg and foot.

Janga Gurung in the tower engaged the insurgents in the main building with his machine gun firing all his ammunition during a furious fire fight. The insurgents managed to get into the base of the tower and subjected him to sustained fire but he remained at his post until rescued some 90 minutes after the start of the attack. During the attack he fired some 8,000 rounds of machine gun ammunition. By his actions Janga Gurung helped suppress the insurgents and bought critical time that enabled staff to enter the safe house.

The siege culminated in Afghan commandos assaulting the building to rescue those in the safe room. The attackers were all killed or detonated themselves within the building. It is beyond question that the actions of all the Gurkha guards greatly assisted in saving the lives of the British Council staff. They all remained at their posts, despite several of them being wounded. Their bravery and swift action bought critical time for others to find sanctuary.

For his actions in helping to disarm a gunman in Yemen


On 23 June 2007, Tony Trethowan, a Health and Safety Consultant, was on duty at an airstrip in central Yemen managing aircraft and passenger safety. In accordance with standard operating procedure, the airfield was protected by a detachment of Yemeni military forces and he was accompanied by a military escort. He himself was unarmed and was there to greet an arriving aircraft.

Once the aircraft had landed small groups of personnel moved forward to greet the passengers and to proceed with unloading. He was in one of the groups. As they moved towards the rear door, they came under automatic gunfire from a position behind them. A few people who had been standing by the front of the plane were seen to fall down. With no cover available Trethowan dived for the ground as bursts of gunfire continued. It became apparent that the source of the firing was a Yemeni soldier armed with an AK 47 assault rifle. The soldier ran forward around the front of the plane, shooting at the body of the aircraft. A number of individuals were hit by the weapons fire. As the soldier came around the back of the aircraft he began firing directly at people, some of whom were already wounded, firing also in Trethowan’s direction again. As the soldier started moving again one of the military guards shot him, hitting him in the left shoulder. As the gunman was starting to fall to the ground from the impact of the shot, the security manager present quickly ran forward and overpowered him. Trethowan ran forward to assist and a fierce struggle ensued. He helped disarm the gunman and restrained him until help came and the soldier was handed over to military personnel.

During the attack Trethowan gave immediate life-saving first aid to a British man who had been badly wounded. That man later said that Trethowan had helped to save his life and very likely, the lives of at least 3 others. Trethowan also took a leading role in the recovery operation, supervising and directing personnel, managing the medical evacuation and escorting injured persons to medical facilities. One person died in the incident and 5 others were badly injured.


Further information about the awards can be obtained from the Press Office at the Foreign and Commonwealth Office (Tel: 0207 008 2379).

Is MoD so desperate for good news stories it is reduced to acting as a rebro for FCO ?