The service has been exploring ways to team F-35’s the new F-15EXwith the XQ-58 Valkyrie or similar unmanned attributable platforms, with the F-35 incorporating this this as part of Block 4 upgrades...


...considerable, together with the latest F-15X. Connecting these unmanned combat air vehicles (UCAVs) to F-35s and the new F-15EXs via encrypted data links to serve as support drones in an initiative/program known as Skyborg. These links, coupled with on-board artificial intelligence allowing pilots of manned aircraft to control their drone wingmen to engage airborne or ground targets on behalf of a manned fighter and possibly sacrificing themselves to protect manned aircraft from inbound missiles.

The Valkyrie flew its first test flight at Yuma Proving Ground, Arizona, on March 5th. Designed to perform and manoeuvre like a fighter jet it can fly at high subsonic speeds, is runway independent taking off from a static launcher with a parachute recovery system and has a stealthy low radar signature design of a trapezoidal fuselage integrating swept-back main wings, V-shaped tail and an air intake above the fuselage. It has an Internal weapon bay and its “open architecture” design allows rapid modification for different mission requirements with different payload options increasing the number of mission types including air-to-air and air-to-ground engagements.

Incorporating commercial-off-the-shelf (COTS) components, it can employ manual or pre-programmed flight control systems, or be controlled by those it flies with. Approximate dimensions and figures. A length of 9.14m and a wingspan of 8.2m. The dry weight of the aircraft is 1,134kg, while its maximum take-off weight (MTOW) is 2,722kg. Top speed of around 567 knots (652 mph, 1,050 km/h), a service ceiling of 44,997 ft (13,715 m), and a range of 2,128 nm (2,449 mi, 3,941 km). It can carry eight weapons, including JDAMs and other small diameter bombs. It can also carry ordinance on wing stations. At present it uses the Williams FJ-33 twin spool turbofan. 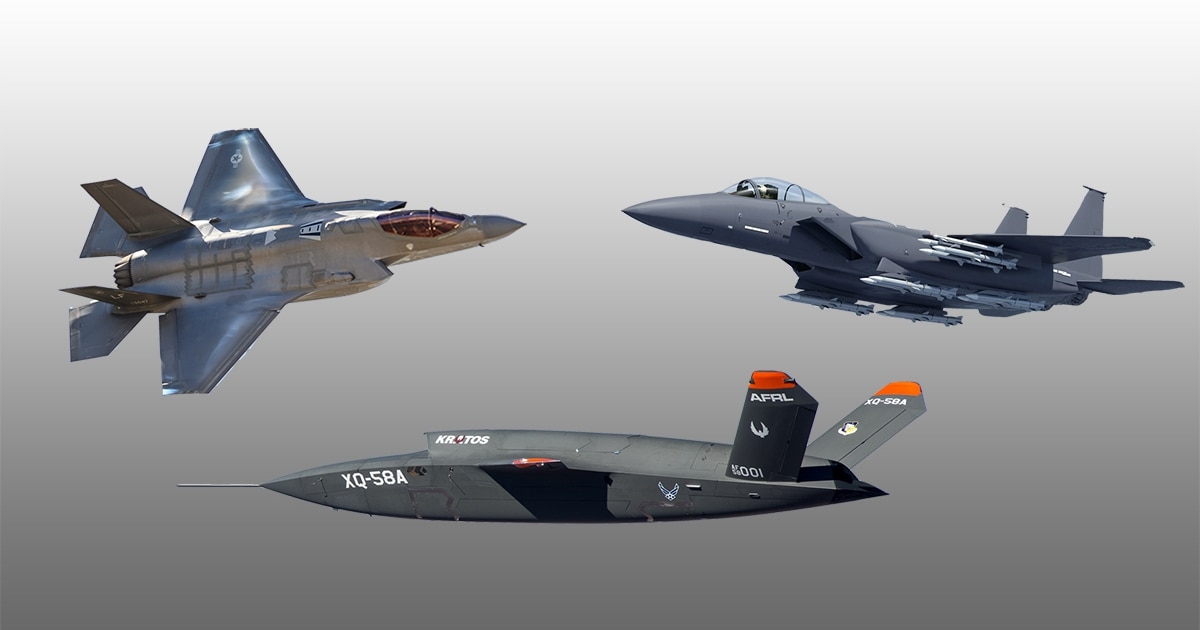 Robotic jets could fly alongside the F-15EX and F-35 as soon as five years from now.

The XQ-58’s new containerised system can be transported by existing military trucks, especially those with Palletised Load Systems (PLS) or similar equipment allowing for rapid unloading and offloading. This allowing personnel to rapidly set up XQ-58A launch sites, even in austere locations without airfield infrastructure, and pack them up quickly to avoid enemy counterattacks concealing point of origin. This also allows movement via other means, including by air, train, or ship. Naval vessels, such as amphibious warfare ships with large flight decks, or contractor-operated merchant ships could also use the system to launch the drones themselves, without the need for other specialised equipment. A single ship could potentially carry dozens of XQ-58As in these self-contained launchers, this allowing an F-35/F-15 team to fly out and pick up pre-positioned XQ-58 wingmen in various forward locations.