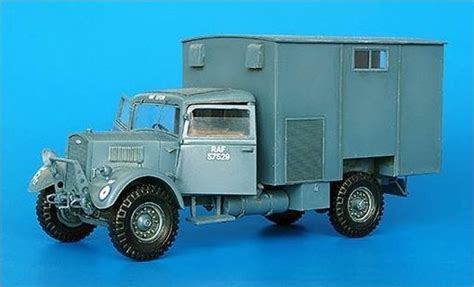 Plus Model 1/35 Ford WOT 3 Workshop
Production of the 30cwt 4x2 Military truck was a war-time build from 1939-1944. They were built mainly for the Army and RAF but a limited number were made for the Royal Navy. By the end of 1944, over 18,000 vehicles were built. A number of variants were made, including, different machinery bodies, delivery truck, flat bed, workshop-lorry and an open cab version for the Indian forces.

Yet another Ford/Fordson from the Plus Model stable, this time, the WOT-3 (Kit number 35199). This is a much bigger model than the WOT-2, but the real vehicle was almost double the 2's size! The WOT-3 could be used for a small radio workshop or even a REME writer's truck.

The kit comes in Plus Model's standard plain white box complete with photo and logo on the front. The picture shows the workshop in RAF livery but examples were seen in the Nort African campaigns as well, turned out in Desert yellow with black Mickey-mouse camouflage. The kit instructions are very basic, comprising two A4 pages in landscape with line drawings of the kit and numbered parts. The painting information is just as bad, black and white line drawings with references to colours but no indication of manufacture!

The kit parts are in small self-seal bags. All the bags are then placed inside a larger bag and wrapped in bubble wrap. On initial inspection, there are two horrendous sink holes in two of the tyres. Repairing these would be time consuming due to replacing tread detail. I decided to recast the damaged tyres with the two-part resin system I use. On further inspection, I found that the steering wheel and two levers were also broken. Annoying when you pay forty quid for a model and they don't even protect the parts correctly. Flash and mould lines are limited, so happily, no grumbles there.

As well as the bags of resin parts, there is also a small sheet of brass photo-etched pieces and a sheet of clear plastic for the windscreen and Windows. On perusing the plans, there is no interior detailing for the body. This will leave plenty of scope for the modeller, especially if the kit is to be made with the rear door open. The kit doesn't actually provide for this, but some careful work with a razor saw should bring forth good results.

Modeller's who want to make anything other than an RAF truck will need to take a good look in the spares box as the only decals supplied with the kit are either for RAF North Africa 1943 or RAF Duxford 1942. Alternatively, a visit to e-bay may achieve desired results.

A nice, unusual subject which, with skill, could become an excellent kit. The lack of any interior detail is depressing as is the lack of any driver figure. The plans, such as they are, require good levels of skill and concentration. The decals are also a bug bear! Why supply RAF decals when the vehicle was used by all three services?

This kit would suit a diorama rather than a stand-alone model purely because a diorama will show it off to it's best advantage.

Rating: 2 out of 5
All mushrooms are edible, some however, only once!

Builds 1/12 scale model Girl on a Hayabusa Bike, glass case and base making.
2 3