Gentle Folk and cultural aficionados - In the light that a Titian Madonna and child painting sold for a record $16.9 million at Sotheby's this is most certainly going to cause some interesting conversations within the Church of England corridors of power .
This is one of a number of potentially interesting/conflict situations facing Museums, The Church and also The National Trust. The NT over their change of use of gifted properties which is kicking off in the letters section of todays DT .
In this specific article It states that the picture was donated on the understanding that it always stays in the church.” Now, that said if its provenance is confirmed and its worth into the millions how will the Church play it, as dear old Ledbury Church isn't going to be able to pay the insurance let alone keep it on the walls. I'm sure the Church will want to cash it in to pay the black hole that's appearing in its finances and what better way than a bit of nice Renaissance art!.

Dusty painting of the Last Supper may be a lost work by Titian, one of the greats among 16th century artists


A vast painting of The Last Supper that has hung in a parish church in Herefordshire since the turn of the last century is being seen in a new light following the discovery of crucial evidence that links it to the workshop of Titian, one of the 16th-century’s greatest masters. ​
A 12.5-foot-long painting in St Michael and All Angels church in Ledbury, was long assumed to be a much later copy. Hanging high on a wall, in a dark and dirty state, its potential had been missed. ​
Ronald Moore, a conservator and art historian, removed centuries of discoloured varnish and was astonished to discover Titian’s inscribed name, a bold under-drawing worthy of Titian himself and an apostle that must be a portrait of him as the facial features precisely match his self-portrait.​
In a three-year study, he linked it to a 1775 letter in which its former owner, John Skippe, an Oxford-educated artist and noted collector, wrote of buying “a most capital and well-preserved picture by Titian” from a wealthy Venetian family, adding that it was commissioned by a Venetian convent. It was donated to the Ledbury church in 1909 by one of Skippe’s descendants.​
“It’s so big and nobody’s taken any notice of it for 110 years,” Mr Moore said. “Anything coming from Titian’s workshop is very important indeed.”​
“I could see it was a bit special, but I didn’t know how special. It’s about ten feet off the ground, so you can’t see it unless you stand on a ladder.”​
Microscopic examination of the picture under ultraviolet light revealed the inscribed name on a jug on the floor, as in another Titian Last Supper. Although damaged, much of the letters TITIANVS could be seen. ​
“That was the absolutely crucial discovery,” Mr Moore said. “I can’t say Titian definitely did the underdrawing, but it’s awfully like him. Very few people would have drawn out a picture on that scale in such a bold manner…​
“Very significantly, no evidence of a spolvero - or tracing - can be seen. The painting contains many pentimenti - changes made during the work - indicating that this was a continuous creative process. Such changes could only be made under the direction of a master painter.”​
Mr Moore, a consultant to auction houses and private collectors, has concluded that the painting was created over some 20 years by various painters associated with Titian’s workshop, who were highly adept at simulating his style.​
Titian’s workshop was incredibly busy, although little has been written on it, Mr Moore said: “He had so many commissions, he simply couldn’t keep up... Some were from people like Philip II of Spain. His [commissions] were important and a convent’s... probably wasn’t at all. So that’s why I think this picture got left behind.”​
The evidence has led him to conclude that the painting was completed around 1580, following the death of Titian in August 1576 and his son Orazio a month later, who are among family members possibly depicted as apostles.​
He has no doubt that the first apostle, wearing a golden robe, is Titian as a young man. Computer facial recognition software and overlaid images confirmed that the features mirror those in a self-portrait painting and a drawing: “Profiles, ears, eyes, noses all matched.”​
The most likely painter of that figure would be Orazio Vecellio, Titian’s son, painting early in 1576. The painting also bears a monogram identifying Titian’s long-term collaborator, Girolamo Dente, and the date of Titian’s death above his portrait, “significant identification of the master”, Mr Moore said. Among other artists, he detects the hand of Palma il Giovane, who completed Titian’s Pietà, left unfinished at his death.​
He added: “The [Ledbury] painting has suffered damage over the years and what we now see is not as it once appeared. Many glazes had been removed in old restorations. Much detail and tone has been lost. Blues changed dramatically due to smalt going grey, glazes have altered colours.”​
While the church deed of gift refers to “a Last Supper after Titian”, Mr Moore found references to visitors viewing “the Titian” at Skippe’s home. ​
Asked whether the picture is now too valuable for the church to keep, he said: “That’s a tricky one. It was donated on the understanding that it always stays in the church.”​
Its early history in a Venetian convent was discovered with the help of Count Francesco da Mosto of Venice - the historian who presents a popular BBC television series on Italy - as his own family had known Titian. Mr Moore was further aided by researcher Patricia Kenny and Professor Alessandra Zamperini of Verona University.​
Keith Hilton-Turvey, the church’s rector, expressed excitement: “We’ve really appreciated all the work that he’s done and all that he’s discovered.”​
Mr Moore’s research will appear in his forthcoming book, Titian’s Lost Last Supper: A New Workshop Discovery, to be published on March 26 by Unicorn Publishing​
​
​
​

Commission a top-notch art forger to paint an exact copy.
Hang that in the church (clearly identified as a copy) - the painting stays in the church - and donate the original to a suitable museum/gallery.

Trackpen said:
Commission a top-notch art forger to paint an exact copy.
Hang that in the church (clearly identified as a copy) - the painting stays in the church - and donate the original to a suitable museum/gallery.
Click to expand...

Yes, I can see that as an option. But as stipulated, it must (not a copy) remain in the church.
What TP (hypothetically) could then kick off is, that the family of the 'gift with reservations' could ask for it back. Now If it was to be worth to be worth squillions, I would and the sell it. That then starts another legal/national bun fight over it being a National treasure. 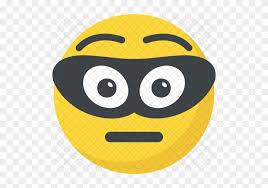 pimpernel said:
Yes, I can see that as an option. But as stipulated, it must (not a copy) remain in the church.
What TP (hypothetically) could then kick off is, that the family of the 'gift with reservations' could ask for it back. Now If it was to be worth to be worth squillions, I would and the sell it. That then starts another legal/national bun fight over it being a National treasure.
Click to expand...

I was about to write what I thought would be a practical solution.
Then I thought it through a bit further and realised my proposal would open a warehouseful of cans of worms.
So, if you don’t mind, I beg your indulgence for the length of time it would take to qualify as a Chancery Barrister , then I’ll get back to you. 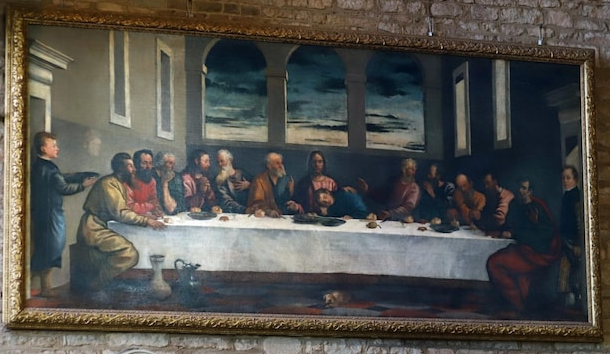 I suggest that "stays in the church" could very easily be construed liberally as 'remaining within the Church of England as an organisation' rather than in Ledbury Church itself.

Peasant. I bet your more of a Banksy type - incidentally It appears he's struck as well on the side of Reading Prison! 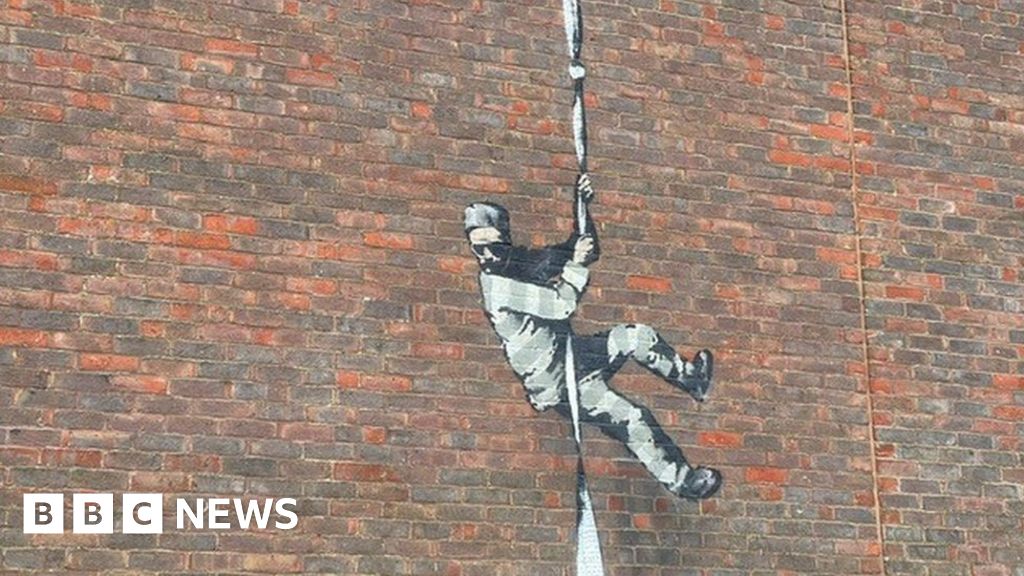 The street art appears overnight on the side of Reading Prison which is under threat of development.
www.bbc.co.uk

'Current Affairs is primarily for the serious discussion of military-political topics and other matters which may affect us as members of the armed forces.'
Click to expand...

painting looks to be an ARRSE mess dinner, lots of old blokes on the vino. 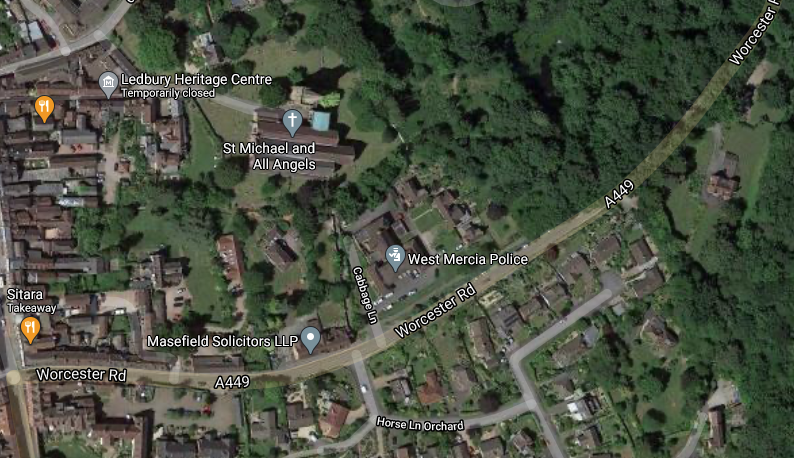 Just next door to the police station. But don't worry I doubt any coppers will be in there.
Older,but no wiser.

You’d burn if you entered it.

wots that bloke in the middle doing? did he drop his sausage /
A sapper with an idea is like a monkey with a hand grenade

sirbhp said:
wots that bloke in the middle doing? did he drop his sausage /
Click to expand...

Dunno, but that drag queen on the left in yellow, Judy or something, is a bit of a grass.

L
Painting Germans and their colours
2

Crack filling prior to painting
2 3