Thomas Anderson is a German national and also a specialist in the German armoured fighting vehicles of World War II. He has spent decades trawling through archives in the USA, Germany and the rest of Europe to discover little-known facts and previously unpublished photographs of the might of the Panzerwaffe. A modeller himself, he regularly contributes to popular modelling and historical magazines across the globe, including Military Modecraft Internarional(UK), Steel Art (Italy, Historia Militar (Spain) and Batailles & Blindes (France) as well as many others. He currently lives in Hanover, Germany.

Throughout History, armies have deployed infantry as the main attacking force, but assembling and positioning these troops can be very time-consuming and at times, a logistics nightmare!

As German military planners developed the Panzerwaffe in the 1930's, they realised that the rapid movement of a gentlemanly required motorised infantry to provide all necessary support. This infantry element for a Panzer Division was an integral Schūtzenbrigade (Rifle Brigade), originally transported in trucks, but from 1939 equipped with more versatile Mannschaftstransportwagen (later Schūtzenpanzerwagen). These half-tracked armoured personnel carriers turned motorised infantry into mechanized infantry and during the summer of 1942, their name was changed from Schūtzen (Rifles) to Panzergrenadiers. 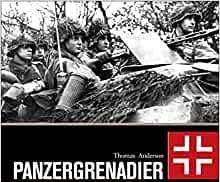 ​
This book is probably the best defined book I have read about any single formatiom! The author starts with a history of German developments after the Versailles Treaty was de-bunked, developing the story from the rifle (schūtzen) regiments and brigades through to the elite fighting machine that was the Panzergrenadier. We are taken from the standard infantry soldier, through to his early travels via motorcycle and/or truck to his goal of the SdKfz 250 and it's variants. Training on these vehicles for long periods of time, left the German Army with an elite force, capable of fast movement in support of the Panzerwaffe, able to gain and hold ground, provide a reconnaissance force and also be able to use their own initiative in the progress of battle.

I rate this book extremely high, if I could grade it higher than five, I would. It is a joy to read, with thoughtful, well-presented facts and excellent photos. A must-have for the historian and modeller.

Five out of Five

· From In a galaxy far, far away
I gave up smoking kippers because I never came back for breakfast. You can spin my nipple nuts and fly me to Alaska though.
Moderator Kit Reviewer Book Reviewer

US 3rd Armored Division in WW2 by Darren Neely