It's a reasonably slim book for what is a huge subject considering that Orkney housed a major Royal Naval base, 4 airfields and numerous Army units throughout the war, but the purpose is more to tell about what the impact of the war on local communities was rather than a detailed military history of an area. It therefore fills that role well, there are ample anecdotes and tales of life in Orkney during the war and the impact the war had upon the Islands. 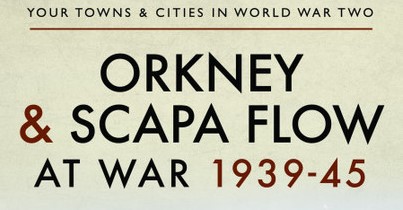 However the book is slightly marred by a number of typographical errors, some rather obvious. I was also slightly bemused as why only some casualties were mentioned, mainly RAF and some Naval (Royal and Merchant); and although they were all well researched, with parents and addresses given, I wondered why only those few were mentioned. The only reason I can think of is that the research was via newspaper articles from the era and these were the only names and details mentioned.

The chapters definitely get shorter as the war years advance (for example 1940 is 40pages, 1944, a mere 7 pages) No reason is given for this decreasing information, but the war was certainly still ongoing!

Overall, an interesting read, lots of familiar names and places mentioned.
The book is well illustrated with contemporary photos and copies of adverts placed in local papers to match the text.

Would I recommend you buy your local one. If you have degree of interest in local history, then yes.

· From In the Highlands, miles from civilisation. Close
NULL
Kit Reviewer Book Reviewer

Interesting series of books, but only Welsh mention is Cardiff. And Merseyside (which didn't exist until the 1970s) has a book rather than Liverpool. Wirral, being in Cheshire (which in itself is missing as would also mention areas including North Wales) had an interesting impact during WW2.