Might have been put up before but worth a bump.
They shall mount up with wings as eagles.

Moderator
Wow. that brings back some memories!!!
http://www.arrse.co.uk/wiki/Barbgenius

A shame to see the camp broken down and overgrown, but so am I now. I used to have a nice view out of that top window of the Manor a few years back and the Cells bring back fond memories as well.

DII appears not to want me to look at these pictures.
"Socialism is a philosophy of failure, the creed of ignorance, and the gospel of envy, its inherent virtue is the equal sharing of misery."

rebel_with_a_cause said:
DII appears not to want me to look at these pictures.
Click to expand...

Quite right too. It's terribly Secret.
Surprised to see things like that safe left there for the demolishing crew to sell.
Funga safari. Leta Tusker na Talisker ngine. Juldi juldi.

Whiskybreath said:
Surprised to see things like that safe left there for the demolishing crew to sell.
Click to expand...

Until the demolishing crew have had the lesson on it I imagine the Int ghosts would not permit them anywhere near it.
Windmilling in to pointless cùnts since 2009.
Ruckerwocman doesn't know very much about firearms.

simbo said:
A shame to see the camp broken down and overgrown
Click to expand...

ooooh_matron said:
Until the demolishing crew have had the lesson on it I imagine the Int ghosts would not permit them anywhere near it.
Click to expand...

Unless someone lost the combination, but I haven't had the call yet, so that can't be it.
Funga safari. Leta Tusker na Talisker ngine. Juldi juldi.

I hope all who look at this thread have signed TOSA.

Most of us are tossers if that helps.
"Socialism is a philosophy of failure, the creed of ignorance, and the gospel of envy, its inherent virtue is the equal sharing of misery."

Fond memories of the 'Wing' afore all this JSIO malarkey.

"My mate did his Interrogators Course there. For starters, he was driven down from Brecon, tied and blindfolded and not in a recreational way " said O2 in response to the piccies.

Eh? I know a couple of OC's of JSIW who would backloop at even the thought that this would even be considered a possibility. No wonder we struggled with the training at times.
The artist formerly known as Bob_Lawlaw

Was it ever a RAF camp? The reason I ask is that the guardroom looks more RAF than army.

I know that there was once a very large REME workshop camp adjoining. Maybe it was once part of that.

Provost said:
I know that there was once a very large REME workshop camp adjoining. Maybe it was once part of that.
Click to expand...

Was that not a TA REME place on a small corner of what was 44 District Workshop? It was big old camp with workshop sheds and railway sidings. I think that it was gradually run down when National Service finished.

Here's a 1945 aerial shot. The Templer Barracks area is up towards the top. 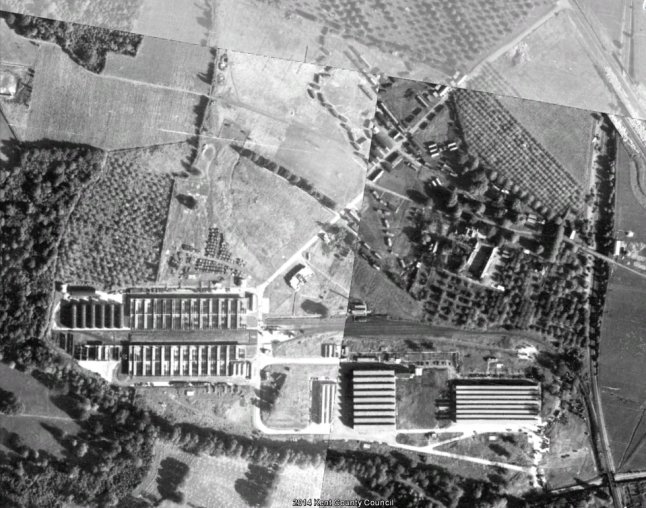 Actually, I think that the Int Corps might have been at Maresfield during WW2, so I think Templer Barracks might well have been the top end of the REME place and was given over to them after the war.

Pretty sure that Templer was much newer than Rowcroft, and never had any real connections. Still seems to be there, or parts of it: 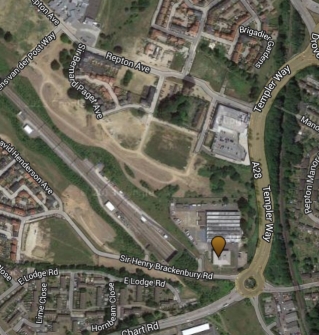 ...I see that the new estate has, in addition to "Brigadier Gardens", an "Intelligence Walk".

No, I'm saying nothing.

I think that the TA place above is new build. The workshop/garage behind it (obscured by the label) is a cut down version of one of the old REME workshop sheds.

They probably had to cut it in half when they drove the channel tunnel railway line through the site. The majority of the old REME workshop site has all been flattened and housing put up.

I'm not too sure about this as Rebel was either waiting to join our Squad or had already passed his driving test, but IIRC those of us who had transferred in and had passed our driving test were detached to JSIW for the best part four weeks and took part in one of their exercises as guards where we were dressed rather unconvincingly in Blue Mao tops with DPM Combat Trousers ! When the hooded prisoners were driven in through the main gate at Templer late at night, (In a Renault 16 with stuck on Cyrillic Registration plates), two of us would meet a prisoner and then stay with him throughout the tactical questioning to ensure they remained uncomfortable and in the stress positions in the cold holding rooming until it was time to move them to speak to Mutt and Jeff.

I remember Block 6A only too well, as Rebel and Subsonic will vouch for - I think our Squad (57) the one before Subsonic's, were the first to move in there from Block 6. We were on the right hand side, downstairs, with the WRAC upstairs and the Sergeants Mess overflow accommodation through the main entrance to the left. How well I remember the warmth of the Drying Room one Wednesday night when the disco was on in the NAAFI. I was getting a good seeing to by one of the local tarts when Jill D***y walked in and caught us at it on one of the benches - a pity, because Jill was a half decent looking girl, as were a few others from Squad 58!

Talking of Rowcroft Barracks, that's where we used to get all our electrical equipment like Steam Irons and kettles after they had been chucked out for disposal.
I can honestly say I've never gone to bed with an ugly woman - but I've woken up with quite a few !

A Camel can go without water for 8 days - But who wants to be a Camel !

The old BFT route went round Rowcroft. I well remember the expressions of disgust among those behind me on the one after our end of Basic piss up, as we neared the start after the warm up I 'followed through' rather badly. Thankfully I'm no racing snake so there weren't too many poor sods behind me, but I was certainly 'toxic' that day. Trust me, it's not much fun running a mile and a half with your kecks well babbered
They shall mount up with wings as eagles.