Nicola Sturgeon - whither the SNP 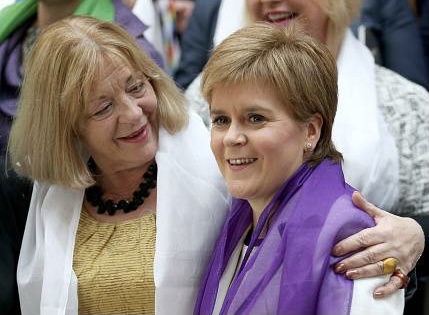 BPS666 said:
Now, I was watching via the BBC app this afternoon and I was wondering if anyone else got a bit of a goosed up transmission but towards the last hour the footage changed to black and white runs of a very young DofE ? BBC getting ready for an announcement?
Click to expand...

i would guess that some ATs are checking blank rounds at KTN, just in case

johnboyzzz said:
They are not that good.

Since this afternoon's SNP debacle I have had lab and cons on the phone asking for my vote in May. I said yes to both

That’s a real Ulster saying - the masters of personation

Allegedly attributed to James Michael Curley, Irish American Democrat and office holder in Boston (Mayor) and Massachusetts (Congressman, twice, and Governor). So corrupt, he could have been the inspiration for Charles Haughey.

Mick9abf said:
How’s he going to get more into the public domain without opening himself for contempt of court . . . /
Click to expand...

Evidence within brown envelopes, sent anonymously to the MSM ?! .
Do the right thing, even when no one is watching . . . It’s called integrity.

Auld-Yin said:
I hear they are bringing in Arnold Schwarzenegger to help her recover

So long as she ends up Mars ...
also available in sarcastic

RoofRat said:
I don't want to shock but...I just watch part of a Janey Godley video on FB, about todays proceedings and, then read some of the comments !!!
Click to expand...

Electromagnetic said:
Putin would like English independence too. Followed by freedom for the constituent counties. Divide and conquer.
Click to expand...

That's what they said about the EU, and look at how that shit-show is going on...
NULL

We already have an unfunny cnut on the thread, Please don't add another one

Hmmm, Westminster getting ready to get involved??

In the HoC today, Liam Fox asked a question at PMQs about the Scottish Civil Service.

Apparently, when devolution was established in Scotland, there was no separate Scottish Civil Service created. It is part of the UK Civil Service with UK ministerial oversight.

He asked the PM to confirm that any Civil Servant who felt pressurised to behave inappropriately, had a mechanism to seek redress beyond the minister to whom they are immediately answerable

Be interesting to see if any come forward.
examining the inside of my eyelids

Another cracker from Effie Deans:


She is ever fair and false​

She is ever fair and false 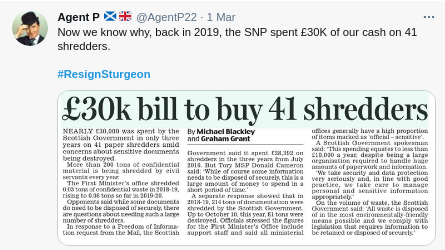 Someone mentioned "Bunter Blackford". Here is a reminder from last year of the claims he makes vs reality.
Puce-faced zealot and national embarrassment offers slimy hand of friendship

Craig Murray tweeted that he still intends to vote SNP 1&2....

Simmerit said:
what really pisses me off it this is my taxes.
Click to expand...

As a tight Scot I know where you're coming from. However, some of us are even more pissed off because of being a Scot! We all, pom gobblers, sheep shaggers, tattie munchers, tight bars tards, think we are all better than the rest, depending on where we were born. If a Martian, (other life forms are/may be available) was shown a map of the world, and was asked which country dominated it for so long, the last place he would have picked was the UK. We punched well above our weight on the world stage, and in some cases still *do. Now, thanks to my countrymen voting in a shower of fanatics, that Union is in jeopardy. You, as an Englander(?)don't have that on your conscience. I, however much I've no say over the border, will always be a Scot, something I was not shy to shout about. Now? I won't be cultivating an English accent, that is mission impossible, but my Weegie accent will not be so strident.

* Before I'm accused of wishing for the days of Empire to return, they were on the way out even before I was born!

Well today must've been like turning up for your 12th July bonfire and found the tims had peed on the wood and stole the matches.
bring forth the holy hand grenade 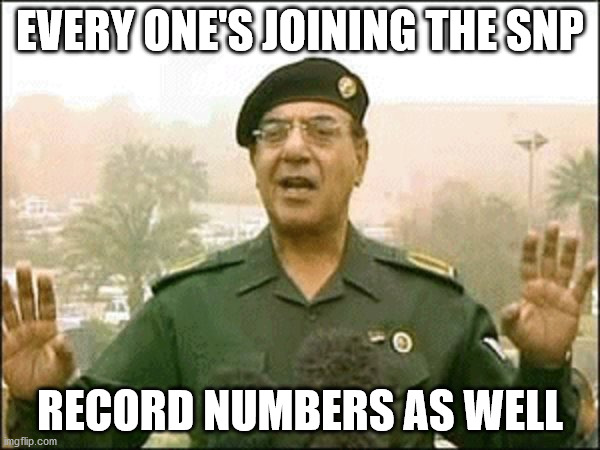 Politics through the Courts
5 6 7

BBC to aid Govt in rounding up pinkos and other traitors