Private (Pte) Thomas Telford Edmundson has been laid to rest over 100 years after he died on 26 April 1915 fighting during the Great War. Since his death aged just 20 years old, he has remained in a shallow grave in a field near the town of Zonnebeke, Belgium and today (Wednesday 14 March) he was given a ceremonial burial with full military honours at the Commonwealth War Graves Commission (CWGC) Perth (China Wall) Cemetery in Belgium. 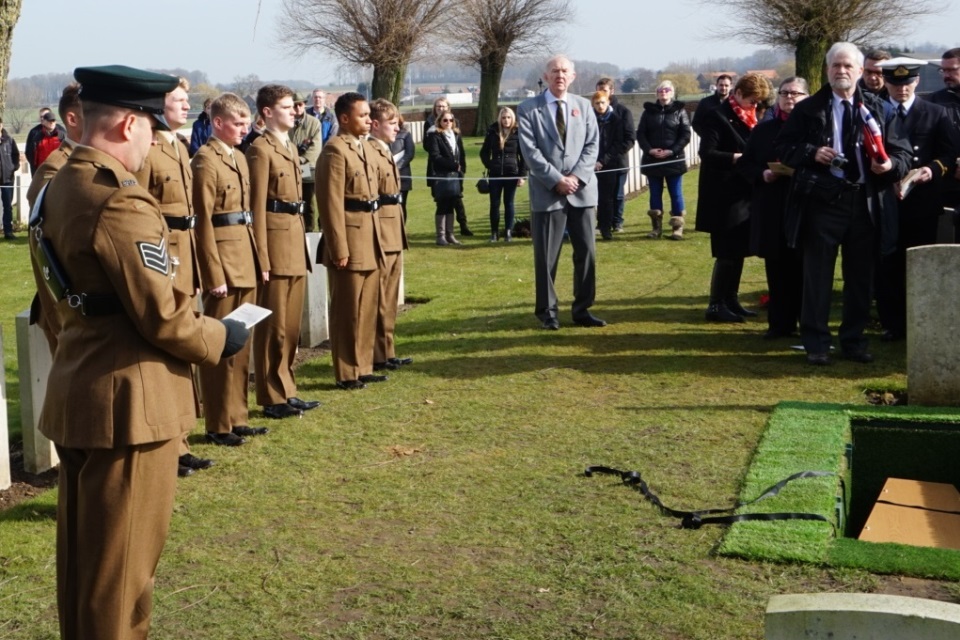 Sergeant Gareth Forrest, 3rd Battalion, the Rifles, reads a passage from the Order of Service, Crown Copyright, All rights reserved

The service, organised by the MOD’s Joint Casualty and Compassionate Centre (JCCC), part of Defence Business Services, was conducted by The Reverend John Swanston, CF, Chaplain to the 1st Battalion the Rifles. 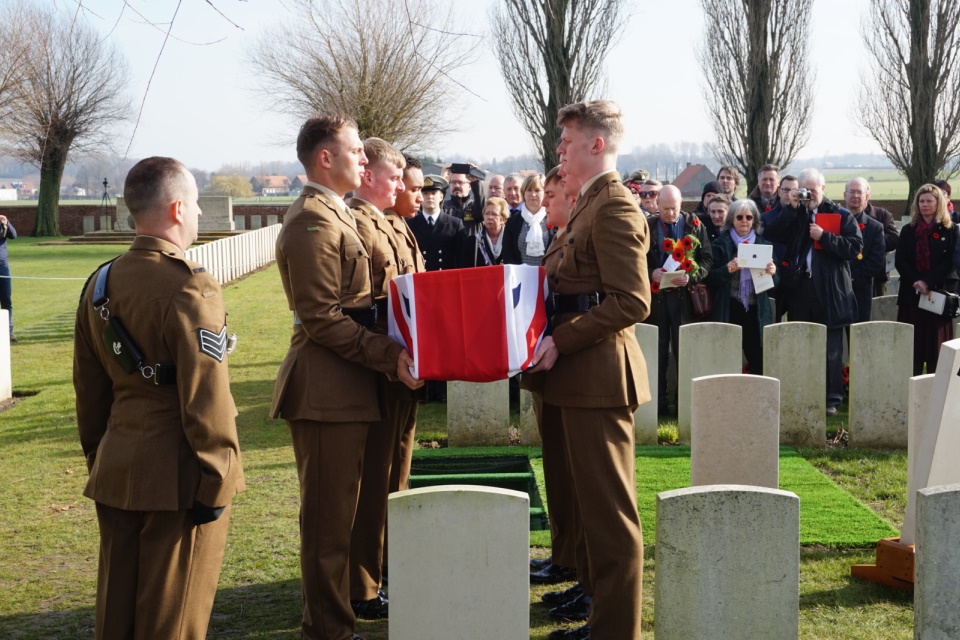 Riflemen from the 3rd Battalion, the Rifles, prepare to lower the coffin of Private Edmundson, Crown Copyright, All rights reserved

It followed the discovery, in November 2014, of remains of a British world war 1 casualty were discovered in Zonnebeke. Artefacts discovered included a single Durham shoulder title. Following forensic samples being taken from the remains in December 2016, extensive research was undertaken by the JCCC and the Durham Light Infantry Museum/Durham County Council had narrowed the number of potential candidates to 8. Further work including genealogy was conducted by JCCC who successfully traced descendants for all 8 soldiers, all of whom provided DNA samples for comparison.

A positive match with a second cousin once removed of Pte Thomas Edmundson confirmed the identification.


Pte Edmundson was one of only 8 Durham Light Infantry soldiers still missing from the Second Battle of Ypres, which is why it has been possible to identify him by means of DNA.
​
I’m delighted that Thomas’ family have been very involved in the planning of today’s service. It’s been a huge pleasure to get to meet them, some of whom have travelled from Canada. Thomas Edmundson made the greatest sacrifice for his country and it’s humbling to be here today with his biological and military family to honour him.
​
Pte Edmundson was born in Sunderland in 1894 to George and Mary Edmundson. He enlisted into his local regiment, the Durham Light Infantry. 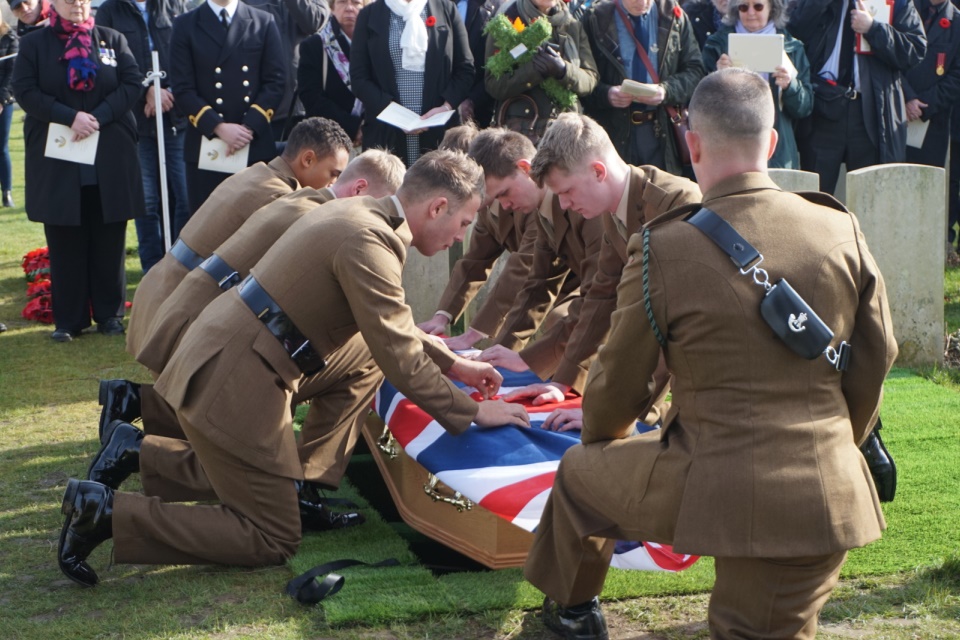 Riflemen from the 3rd Battalion, the Rifles, carefully fold the ceremonial Union Flag in honour of Private Edmundson, Crown Copyright, All rights reserved

The 1st/7th Battalion of the Durham Light Infantry was involved in the second Battle of Ypres which was fought from 22 April to 25 May 1915 for control of the strategic Flemish town of Ypres in western Belgium. The Battalion’s war diary records them as camping beside the Ypres-Zonnebeke road on 25 April 1915 before advancing over open fields towards Zevenkote and Gravenstafel in the afternoon of 26 April, taking up a position north of Zonnebeke. The Battalion lost 8 soldiers in action on 26 April 1915. None of them have a known grave and their names are recorded on the Menin Gate Memorial in Ypres. 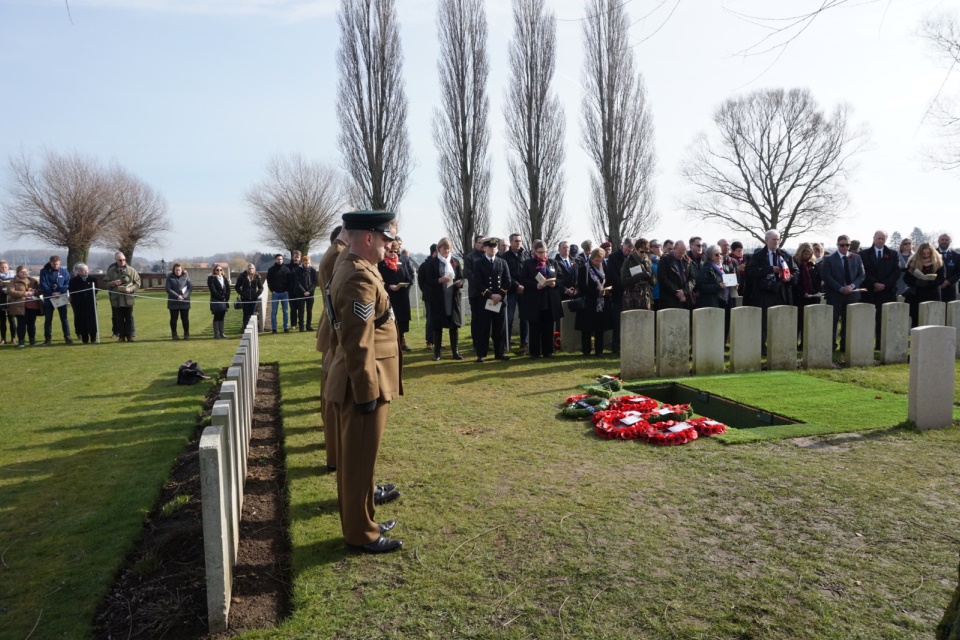 Riflemen from the 3rd Battalion, the Rifles, stand alongside dignitaries, officials, family members and members of the public during the burial service of Private Edmundson, Crown Copyright, All rights reserved

Family members who paid their respects to Pte Edmundson included several second cousins twice removed, some of whom had travelled from Vancouver, Canada for the ceremony. Current members of the 3rd Battalion, the Rifles paid tribute to their former colleague by providing a bearer party for his coffin.

David Hall, a cousin of Pte Edmundson on behalf of the Edmundson family said:


There was fascination and great interest at the news that human remains found in Zonnebeke, Belgium, had been positively identified as a relative of ours, Thomas Telford Edmundson. He died in the First World War, but had no known grave. We were unaware of this branch of the family, and sadly this part of Edmundson line died out, as Thomas had been the sole surviving son, a younger brother of Thomas’ died in infancy. There was also a sister, but we have no information about her. Our branch of the Edmundson family is widely scattered, with some still living in Sunderland, and others living in Canada and Australia.
​
We have been greatly impressed by the painstaking work organised by the Joint Casualty and Compassionate Centre (JCCC) of the Ministry of Defence. They had to identify descendants of 8 Durham Light Infantry soldiers who were killed in fighting around Zonnebeke on 26 April 1915 and had no known grave. Then they had to arrange the collection of samples for DNA testing, and this led to the identification.
​
Sub Lieutenant Harry Lewis, British Embassy said:


It is an honour to be involved in this service. After so much time, Pte Edmundson has been given the military funeral that he deserves. It is important that he receives a final and proper resting place, after having made the ultimate sacrifice during the first world war. This occasion is especially poignant as his family has joined us here today to remember him.
​
It is important that we continue to commemorate these soldiers, who 100 years ago gave their lives for freedom. Although we may not know everything about who they were, we honour their immense courage, conviction, and service. We give thanks for these extraordinary acts made by ordinary people.
​
Mel Donnelly, CWGC said:


More than 100 years after his death, Private Thomas Edmundson has been laid to rest at the Commonwealth War Graves Commission’s Perth (China Wall) Cemetery with the honour and dignity his sacrifice deserves. Today’s ceremony is an opportunity for us to give thanks for this brave man’s service, to understand the effect his loss had on his family and his community, and to renew our determination to remember him and his fallen comrades forever.
​
Captain Patrick Keating, Adjutant 3 Rifles, successor regiment to the Durham Light Infantry, said:


It is an immense honour for the Riflemen of 3 RIFLES to be involved in the burial of Pte Edmundson of the Durham Light Infantry who faithfully served his country over 100 years ago. It is humbling to think of this sacrifice and the debt which the country owes him and we are proud that we in the RIFLES carry on the traditions of the Durham Light Infantry and our other antecedents to this day.
​
A new headstone bearing Pte Edmundson’s name has been provided by the CWGC, who will now care for his final resting place in perpetuity.

Book Reviewer
Glad to see this young man finally given a military burial, and his cousins honouring his sacrifice.
And this you can see is the bolt. The purpose of this
Is to open the breech, as you see. We can slide it
Rapidly backwards and forwards: we call this
Easing the spring. And rapidly backwards and forwards
The early bees are assaulting and fumbling the flowers:
They call it easing the Spring.
They call it easing the Spring: it is perfectly easy
If you have any strength in your thumb: like the bolt,
And the breech, and the cocking-piece, and the point of balance,
Which in our case we have not got; and the almond-blossom
Silent in all of the gardens and the bees going backwards and forwards,
For today we have naming of parts.

Credit to the person finding the remains reporting to the authorities and for the extensive research in identifying them.

It gives some hope of somebody finding my Great Uncle (not Bulgaria) before I shuffle off this mortal coil, speaking as one of the last of the family who is of an age where, under different circumstances, I might have met the bloke during my childhood.
"Hurrah for the Works Group" just doesn't have the same ring...

News story: Two unknown soldiers given military burial a century after their deaths in the Great War