News story: Seven british Army soldiers killed during World War 1 are honoured as they are laid to rest

Captain Henry John Innes Walker, a New Zealand national serving with the british army, has finally been laid to rest alongside 6 unknown soldiers after they were killed during World War 1. Known to his family as Jack, Capt Walker enlisted into the Royal Warwickshire Regiment as did 1 of the unknown soldiers. The 5 remaining were buried as unknown soldiers of unknown regiments, all at the Commonwealth War Graves Commission New Irish Farm Cemetery in Ieper, Belgium. 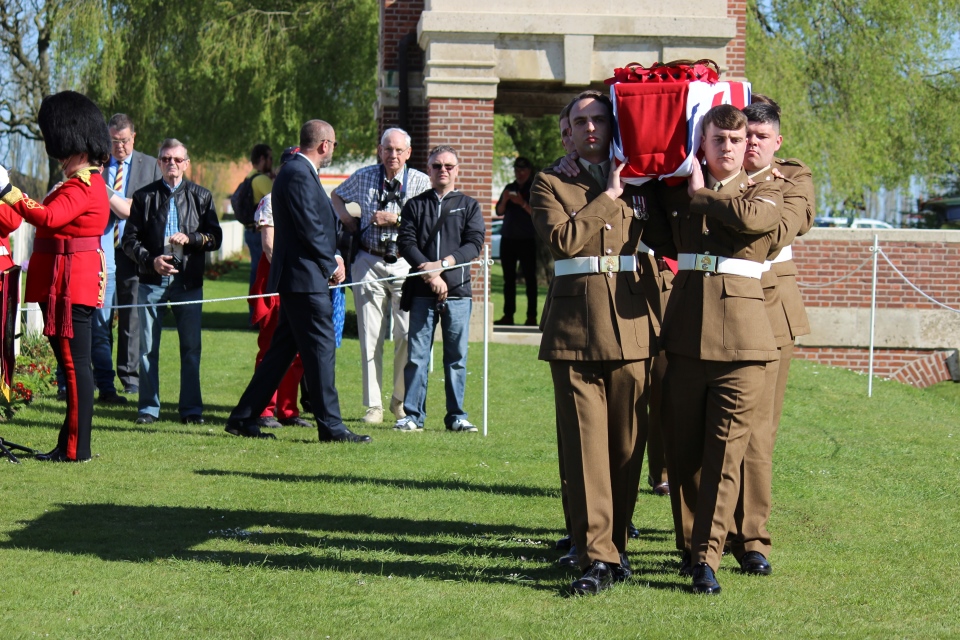 The service, organised by the MOD’s Joint Casualty and Compassionate Centre, part of Defence Business Services, was held on Wednesday 18 April 2018 and was conducted by the Reverend Stuart Richards CF, Chaplain to the 1st Battalion The Royal Regiment of Fusiliers.


It’s a great honour to be here today to lay to rest these 7 brave men who paid the ultimate price in the service of King and country. Although saddened that the 6 will remain unknown, I am delighted that we managed to return Captain Walker’s name to him and especially thrilled that his great nephews have travelled so far to be with us today.
​
After war was declared in 1914, the Royal Warwickshire Regiment left for the front and Capt Walker saw active service on the Belgian frontier as part of the 10th Brigade of the 4th Infantry Division. Capt Walker was aged 25 when he was killed on 25 April 1915 during the Second Battle of Ypres, which resulted in his regiment losing nearly 500 men. It is likely that all 7 died during the Second Battle of Ypres (April-May 1915). 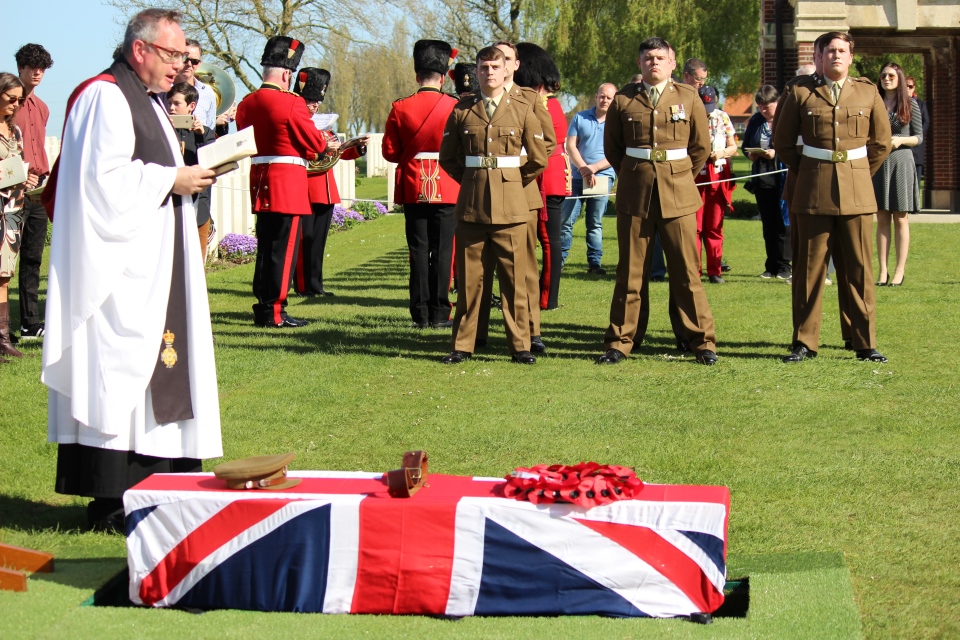 
It is a privilege to be part of this on-going act of national remembrance, to preserve and dedicate anew these memorials for future generations. Captain Walker travelled from the other side of the world to serve his country, and was never to see his home again. Today, a century on, his family have made that same long journey in his honour, and to remember those he led and died with.
​
During a planned archaeological dig on the western side of the village of St Julien in April 2016, human remains and artefacts dating from World War 1 were discovered. Capt Walker and the 6 unknown soldiers were found amongst a total of 38 casualties from various nationalities. 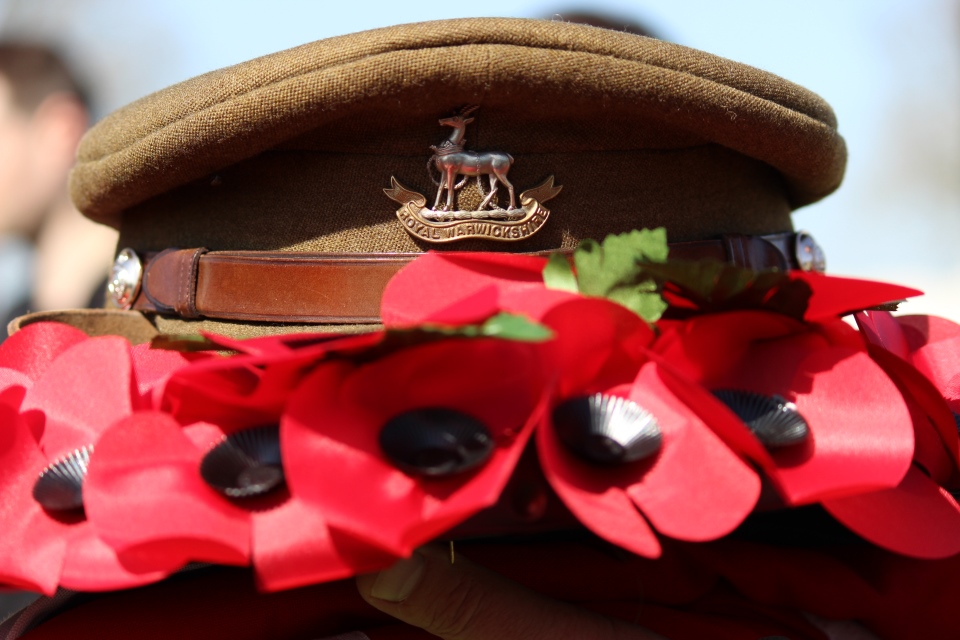 Family members who paid their respects to Capt Walker included his great nephews, Allan and Alistair Innes-Walker, who travelled from New Zealand and Australia respectively. Also present was Greg Andrews, New Zealand Ambassador to Belgium and France, and Colonel James Phillips, the Defence Attaché from the British Embassy in The Hague. Current members of the 1st Battalion The Royal Regiment of Fusiliers paid their own tribute by providing the bearer party.


According to his men, Jack’s last words were ‘Come on lads’ as he raised his revolver and led his company towards German lines and heavy fire. His discovery and burial are a once-in-a-lifetime opportunity for my children to connect to a family member and a devastating history - an unexpected and inspiring legacy.
​ 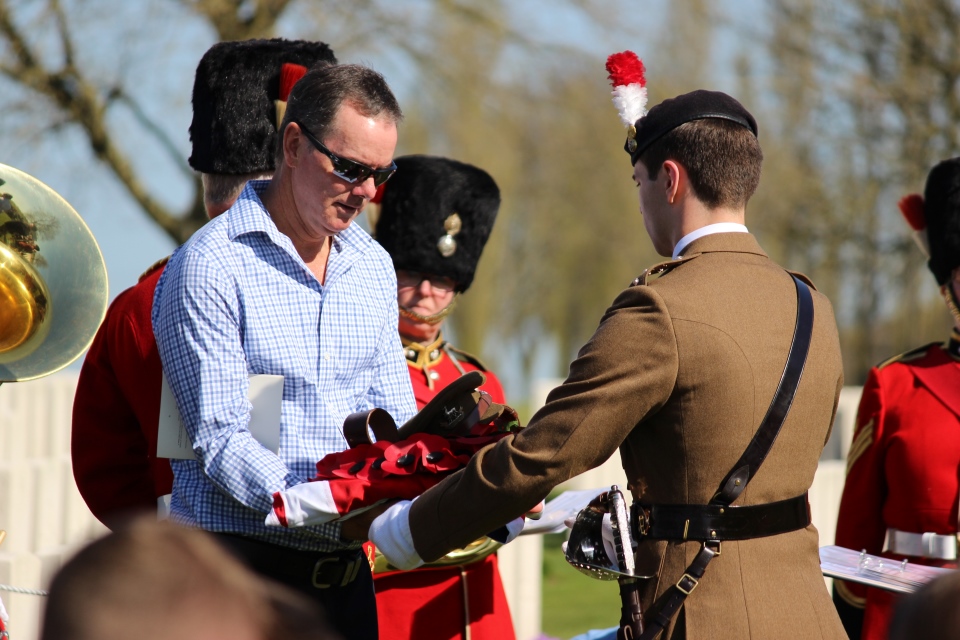 
My son is named after Great Uncle Jack. At school we sat beneath his memorial stained glass window - an ever-present reminder of a sad but proud history. To have the chance to pay our respects and meet those involved from the MOD Casualty Centre will mean so much to Jack’s now very extended family.
​ 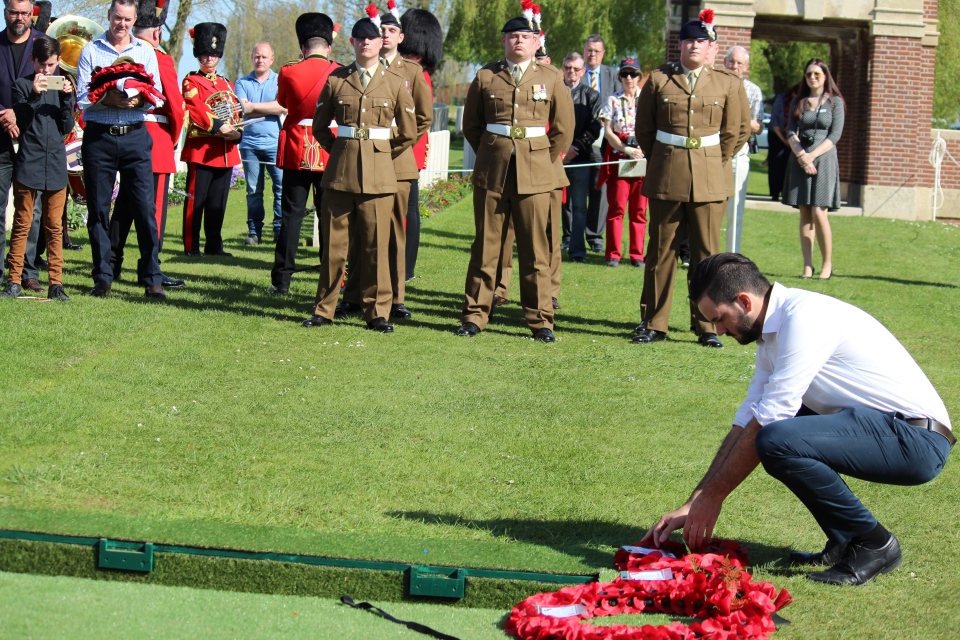 Michael Innes-Walker, the nephew of Capt Walker was unable to make the journey. Michael said:


From my earliest years my father told me stories of Uncle Jack - the schoolboy scholar and sportsman. He always wanted to be a soldier and joined the Royal Warwickshire Regiment, got posted to India and became a close friend of ‘Monty’ (later General Montgomery) before transferring to France. My family never knew what happened to him other than he was killed in action, and now we will be honouring him as he so justly deserves.
​
Mel Donnelly, CWGC said:


Captain Walker was far from his New Zealand home, when he was killed in action in April 1915. He was a remarkable man, sent to serve with the British Army on behalf of his country, an outstanding athlete and a decorated officer. Today we have been able to lay him and his comrades to rest at the Commonwealth War Graves Commission’s New Irish Farm Cemetery, alongside the men they fought and died with. We remember his sacrifice and that of all those who served and will care for their graves and their memory with dedication, forever.
​
Colonel James Phillips, British Defence Attaché said:


It is a real honour representing the British Embassy at the burial of Captain Walker and six unknown soldiers. These were men who fought in such horrific conditions that it was impossible to identify them. They will never be forgotten – today has shown that. The end of the first World War may have been 100 years ago this year, but our memory of these men will live on. Their fight was instrumental for our freedom. It is important that these soldiers have been given a final resting place, with the full honours they deserve. They have made the ultimate sacrifice for us.
​ 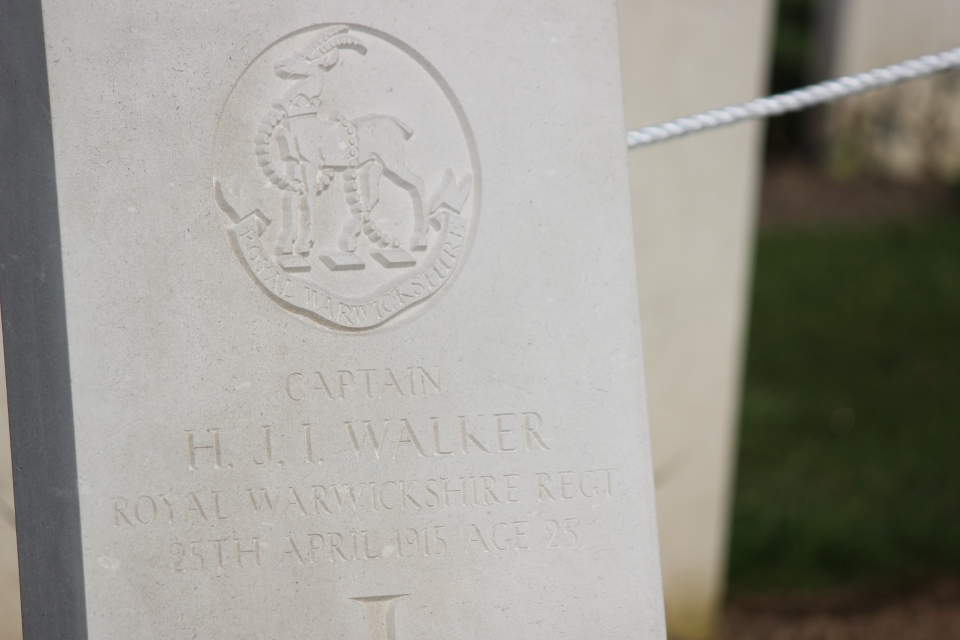 One new headstone bearing Capt Walker’s name and six inscribed with ‘Known unto God’ have been provided by the CWGC, who will now care for their final resting place in perpetuity.

News story: Graves of Two Kent Soldiers Identified a Century After Their Deaths in the Great War