After successful operations including supporting Operation Recsyr, the international effort to remove chemicals from Syria, the frigate sailed into Her Majesty’s Naval Base Devonport to a heroes’ welcome from over 500 family members and friends.

The ship initially sailed into the Mediterranean in August with a number of other warships as part of the Response Force Task Group for Cougar 2013, an exercise designed to enhance the Royal Navy’s skill at operating at long range from land and support.

She then made her way to the Gulf where she conducted maritime security and reassurance patrols alongside partner nations in the region; safeguarding the sea lanes of the Middle East.

In November Montrose became the UK’s primary maritime policing patrol vessel in the Gulf. A new tasking then directed the ship into the eastern Mediterranean to join Operation Recsyr. 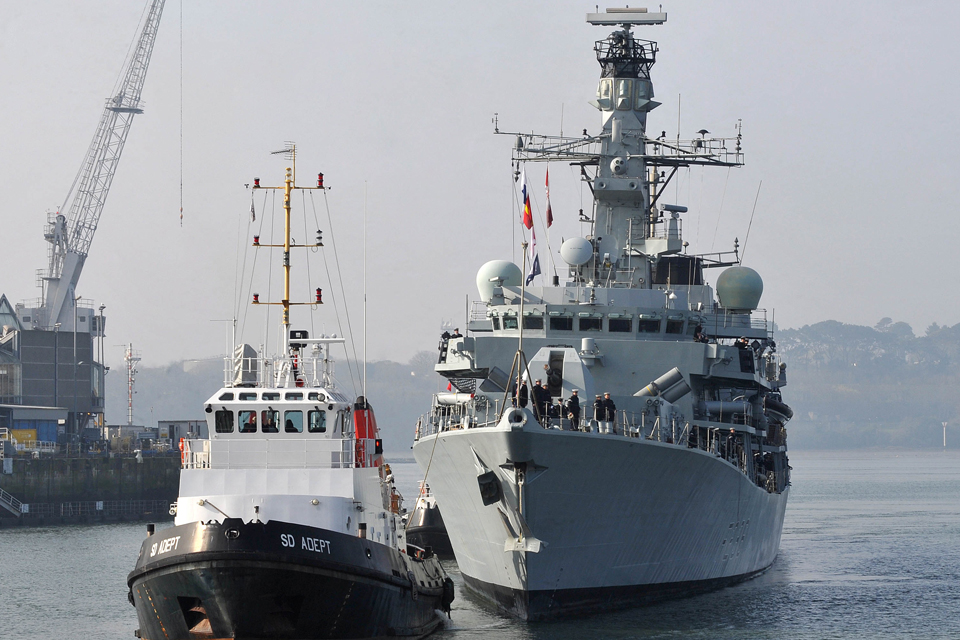 After arriving off the coast of Syria in mid-January, HMS Montrose and a multinational task group of warships from Denmark and Norway carried out escort and close protection duties for 2 merchant vessels transporting chemicals out of Syria for onward destruction.

The ship’s commanding officer, Commander James Parkin, praised his crew for taking each operation in their stride. He said:


I am incredibly proud of my ship’s company who have committed themselves to the changing circumstances of this deployment and the professionalism that this mission has demanded.

The deployment has been a success in every one of the many tasks that my team have undertaken.
​
Talking about the international importance of the Syria tasking, Commander Parkin added:


This mission is a statement of intent by the global community and we are extremely proud to have been the United Kingdom’s first contribution to its vital work.
​ 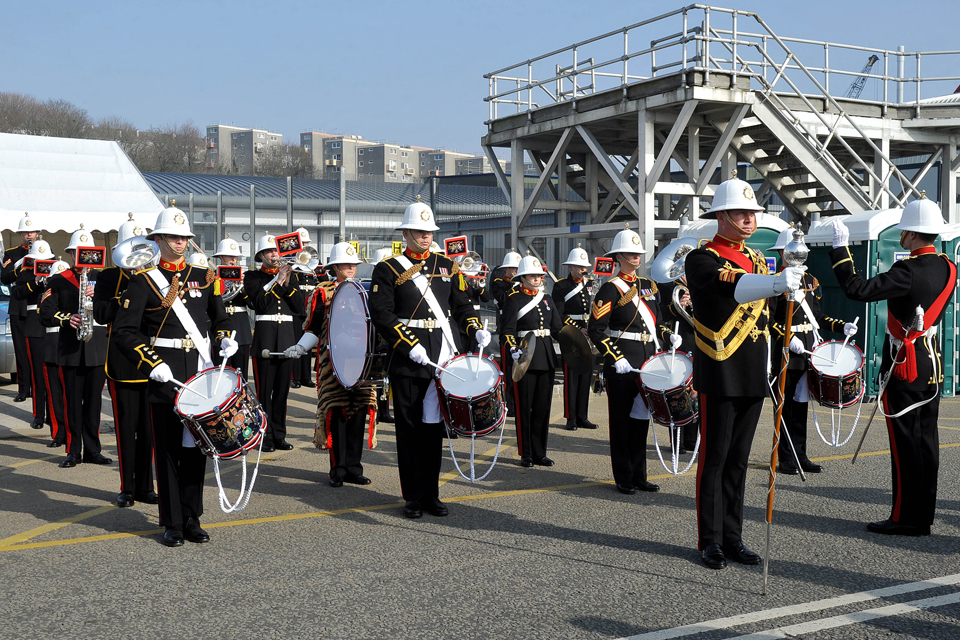 Leading Engineering Technician Tom Baxter, originally from Durham, hugged his daughter Ruby, aged 13 months, as she and her mother Terri Allen welcomed him home. He said:


It’s good to be back. Ruby was only 6 months old when I left. She’s a big girl now. She’s lovely.

As well as seeing Ruby again after missing half her life so far, I’m looking forward to getting married to my fiancée Terri in Cuba. So it’s an extra special homecoming for us.
​
Terri, who works at the Royal Navy’s initial training school at HMS Raleigh, said:


I’m really pleased Tom’s back. He can now take his share of the parental duties. I’ll let him a have a little break first of course!
​ 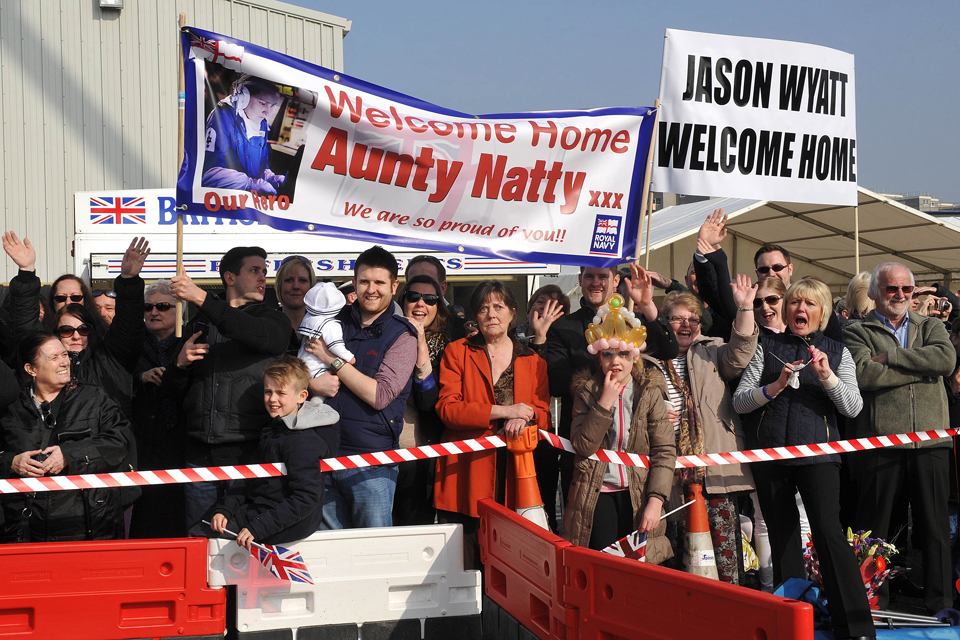 First off the ship was Petty Officer Andy Styles, who won the honour usually reserved for the captain in a charity auction. He said:


It feels really good to be first off the ship – an honour, and I see my wife and family first. The deployment was full of variety and unexpected taskings.

Working with the other navies was very rewarding. We were all very upbeat about the Syrian tasking because it had a definite purpose and outcome which is different from patrolling.
​
Petty Officers Styles’ wife Tracey said they would be going skiing and mountain biking along the West Highland Way in Scotland to wind down after the deployment. She added:


I’m so happy now he’s back. He’s been in the navy 24 years and I never fully get used to him being away.
​
Deputy Logistics Officer Lieutenant Nick Robinson, who helps keep the ship supplied with everything from bullets to butter, said: 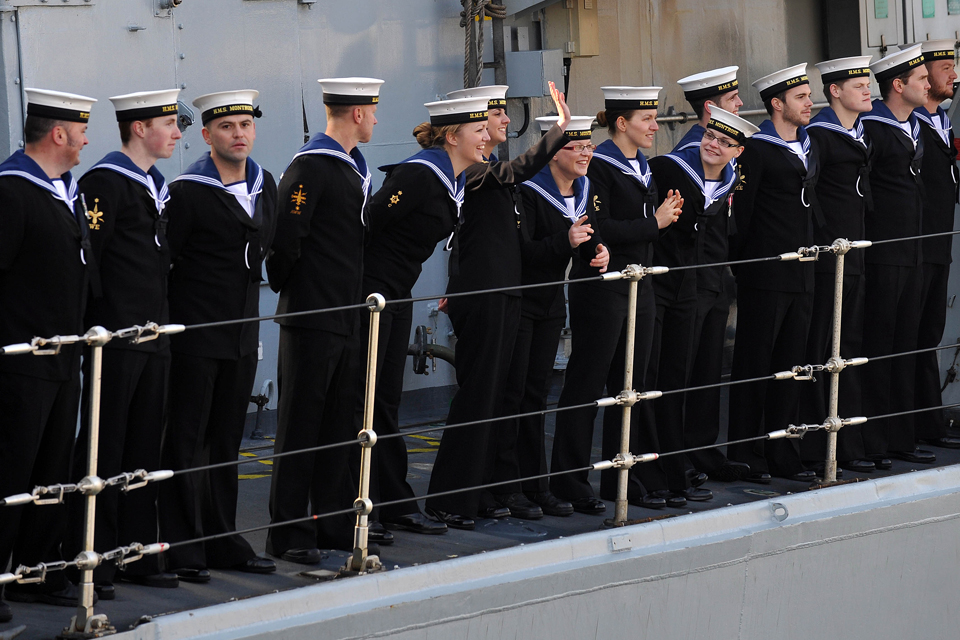 The marine engineers ensured that the ship’s diesel and gas turbine engines operated at full capacity and used 3,763,000 litres of fuel, enough to send a car to Venus on 50,000 fills.

While away, the ship’s company were grateful for the steady supply of messages from loved ones back home – 787 bags of mail, weighing 6 tonnes, were brought aboard.


Receiving mail from home is vital to morale on board, for some it’s been letters with news, for others it’s been magazines and chocolates. For me it’s been the regular supply of Battenberg cake from my mum!
​
It has not just been mail that has been delivered; 8 proud new fathers are now looking forward to returning home to spend time with the new additions to their families. 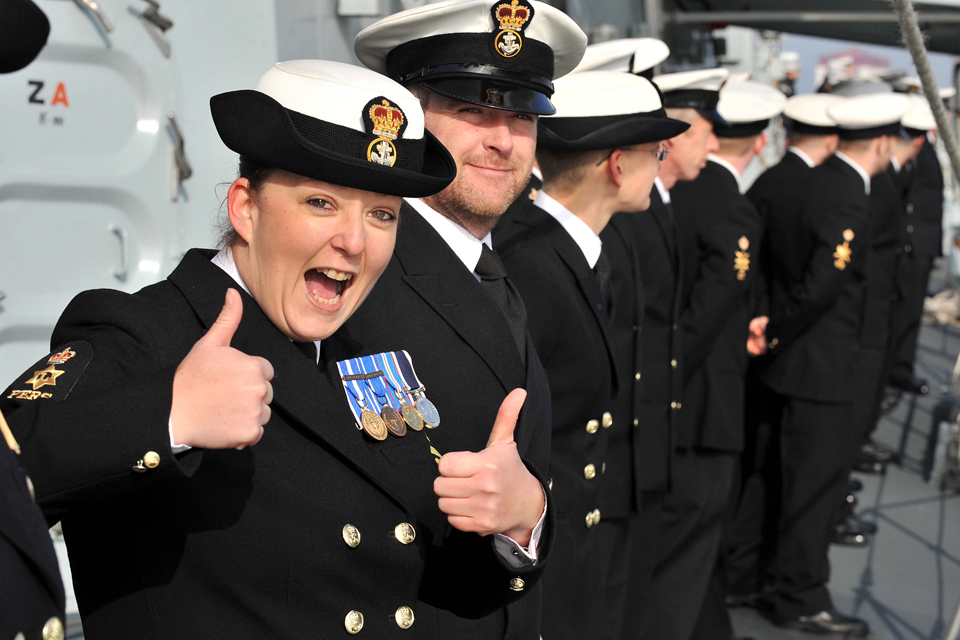 A member of the ship's company is excited to be home again [Picture: Leading Airman (Photographer) Alex Knott, Crown copyright]


The thought of returning home to be with my beautiful new daughter has kept me going for the whole 7 months.
​
After leave and a short period of maintenance HMS Montrose will take on the role of the Royal Navy’s high readiness ‘on-call’ warship.


Continue reading...
This is an automated feed from the Ministry of Defence website

The Power and The Glory by Steve R Dunn