Ministry of Defence said:
Theres no doubt that reservists are on our radar at the moment. Not only are their numbers set to swell, the Armys target is to have 30,000 trained reservists in place by 2018, but their role is changing too.
Corporals James Goff and Mark Finmore are part of an 8-man team in Kabul providing close protection to Lieutenant General John Lorimer, the Deputy Commander of the NATO-led International Security Assistance Force (ISAF).
Its their job to make sure the boss gets to where he needs to be, safely and on time. Another reservist, Lance Corporal Aidan Cooper, is part of a separate team protecting UK Major General James Hockenhull.
When General Lorimer travels by helicopter, members of the team accompany him as bodyguards. But road moves involve them in a lot more planning and preparation as they bear full responsibility for the trip.
Nothing can be left to chance. For example, being able to find their way around the chaos of the Kabul streets is essential. Parking up to peruse an A-Z (even if there was one) would not impress the General.
Corporal Finmore, who is a floor layer in his civilian life, said:

We know the routes extremely well. Obviously certain information might mean that we have to change from our normal route. Were constantly adjusting the way we work.
​
This means endless recces, checking vehicles and kit, and being constantly aware of the threat situation. In their specially protected Land Cruisers the team can take the boss to most places in Kabul within 30 minutes  but that can easily double if the traffic is bad.
But you could argue that the traffic is always bad on roads where road safety lends itself more to kismet than to the Highway Code.
Corporal Goff explained:

It can be pretty busy. The Kabul road network is hectic compared to what were used to in the UK. You can find yourself on a road where the road system has been switched around from one day to the next, so you have traffic coming towards you.
​
And then there are the police checkpoints to deal with.

I can definitely see a noticeable change from when I was here last year on my first tour, said Corporal Goff. There is a much stronger police presence, they are taking on a lot more responsibility, and the way we move around is affected by that stringency. But that is what youd expect.
​
Also on his second tour is Lance Corporal Cooper; however his last was in a different role, as a police adviser in Lashkar Gah:

I returned from operations last October. Then after finishing the 8-week close protection course, which we have all done, I was mobilised for this tour pretty much straight away.
​
On civvy street, Lance Corporal Cooper works in the private security industry but fully intends to carry on as a reservist:

For me its the best of both worlds. I can enjoy my civvy career and still do something Ive always wanted to, which is be in the military. I think Ive got the balance just right.
​
[h=3]Media adviser[/h] 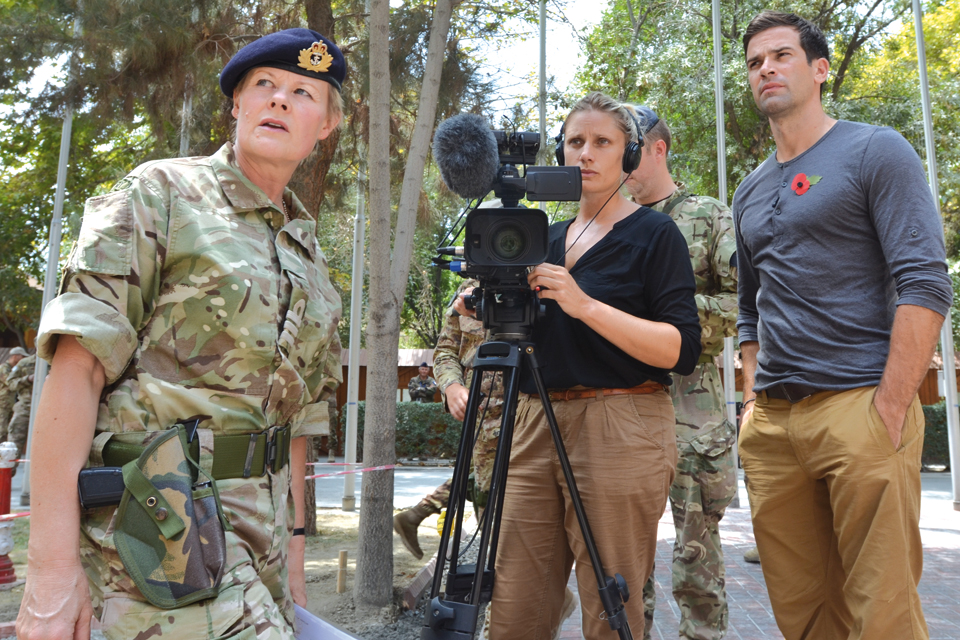 Commander Jane Allen (left) assists TV presenter Gethin Jones filming for a Remembrance Day broadcast [Picture: Crown copyright]Nearing the end of her service in the Royal Naval Reserve, Commander Jane Allen was determined to fit in one more deployment. Now in her 33rd year of service she is based in Kabul, where she works as Deputy Commander ISAFs media adviser:

This is only my second tour of duty and they dont tend to deploy many people at my rank, she said, so I really had to push to get it.
It probably went in my favour that my last posting to Iraq in 2006 was to do a very similar job.
​
But why had it taken so long to get that yearned for first deployment?

I joined as a Wren during the Cold War era when the service was very different. Back then we carried handbags not weapons, wore skirts not trousers, and we didnt go to sea.
​
As a self-confessed tomboy, Commander Allen admits that, if it had been possible, her early ambitions were to join the Royal Marines:

I was a real action person so I didnt join the Navy as the only future I could see was as an Admirals PA (personal assistant), so I went off and did other things. Much later I joined the reserves, and it really has given me the best of both worlds.
​
Commander Allens patience paid off, because when the first deployment did come along, it proved to be an even more rewarding experience than she had hoped:

Iraq at that time was a dangerous place, but I did manage to get out and about.
​
The biggest logistical challenge was to get a group of western and Iraqi journalists from Baghdad out to the oil platforms in the north Persian Gulf, then back via Umm Qasr:

The trip included travelling by road, helicopter and Hercules plus a move to HMS Echo. It was quite a marathon.
​
But it also taught her a lot in terms of what it means to be a media adviser on operations. This included playing her part in developing the skills of spokesmen for Iraqi ministries:

We had to train them and make sure that they understood that if they wanted their country to succeed then they needed to co-ordinate their messages.
​
To help bed this in, Commander Allen accompanied a number of them to London for training:

It was very hard work, but it resulted in them writing their own communications plans and putting their tribal differences to one side, and to look at things from a national perspective.
I learned a lot there which is useful here in terms of co-ordinating efforts across the country and feeding content into a bigger more strategic narrative. There is a danger that the British public sees Afghanistan as only being about Helmand province.
My tour will be about helping to lift the narrative to show how things are at a national level.
​
The life of a media adviser is one of compromise. The aim is to achieve an acceptable balance. On the one hand they have to make sure that the media gets as much access to places and people as possible while making sure that the messages that ISAF want to promulgate also get air time and column inches.
Its not easy, and sometimes it can also mean reminding the boss that the press wont necessarily write exactly what he likes.
[h=3]Postal orderly[/h] 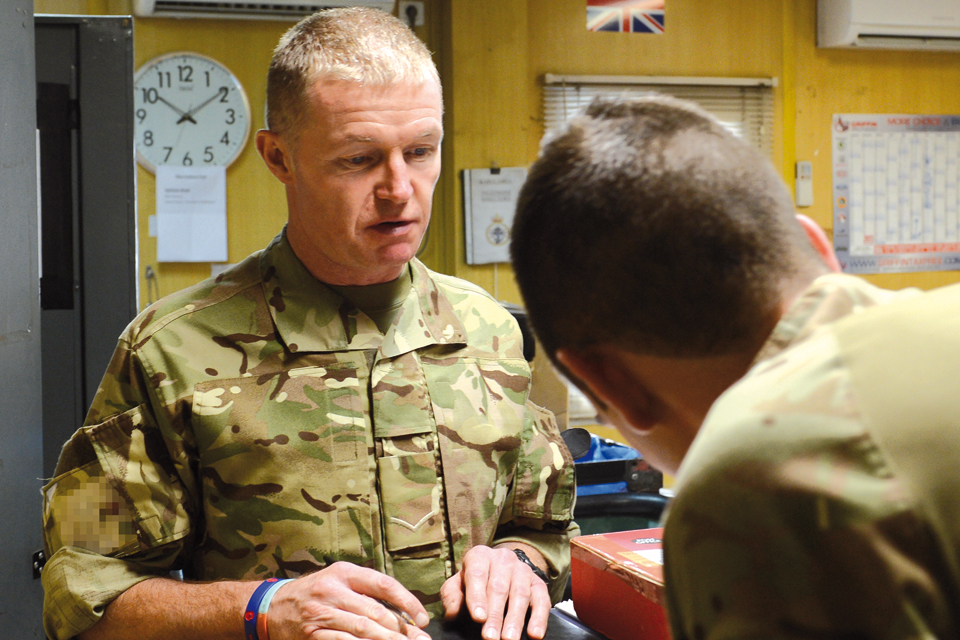 Lance Corporal John Stott is the postal orderly for British troops at ISAF Headquarters [Picture: Corporal Jamie Peters RLC, Crown copyright]Lance Corporal John Stott gets a lot of mail. Every 2 or 3 days, depending on transport and the weather, he receives anything from 2 to 20 bags of it from the airport on the outskirts of Kabul.
As the postal orderly for British troops based at ISAF Headquarters its his job to sort it all out:

It takes between a week and 10 days to get here from the UK. It comes via Bastion, but sandstorms, flights getting cancelled or large movements of troops can delay things.
​
When he first arrived, things were relatively quiet to start with. He said:

I just had to lock the door. I was here until about 10 every night just trying to get my head round it all.
​
Sorting through all that mail in a small office is difficult enough, and it doesnt help when an item is incorrectly addressed:

If theres something like that I put a note on the door, so if people are passing and recognise the name they can tell the person. Otherwise after 3 weeks I have to send the item back to the UK; theres just not enough room to store things.
​
But the days of letters from loved ones are not what they once were. With email, eblueys and internet access the bulk of the mail today tends to be packages and, rather oddly, pay slips.
And then there was the tin of sardines. And, yes, it had come open in the post. And naturally it had been sitting in a bag at Bastion for a few days before reaching Kabul. Lance Corporal Stott explained:

So it was minging by the time it got here.
​
He has worked for the Royal Mail for 28 years, and been a reservist for 26:

Its been a good laugh and Ive made some good mates. This is my first proper overseas deployment and its harder than I thought it would be. But its cooler here than in Bastion, so I feel a bit mollycoddled and lucky to be here.
​
[h=3]This article is an abridged version of a report by Ian Carr that features in the October 2013 issue of Defence Focus.[/h][h=3]The UK reserve forces play a vital part in our nations defence. Find out how you can get involved and what is on offer for reserves.[/h]

What corps does senior officers' CP?

RMP?
Anyone who has done the course?


Posted from the ARRSE Mobile app (iOS or Android)
P

RMP?
Anyone who has done the course?


Posted from the ARRSE Mobile app (iOS or Android)
Click to expand...

Rose with UNPROFOR had RMP and infantry hence the question


Posted from the ARRSE Mobile app (iOS or Android)
bad indeed is the condition of a General when he has sickness among his men and an enemy to contend with at the same time.
Machiavelli
The Art of War, 1521.

Rose said in his book that he brought in SAS bods to provide his CP.


Posted from the ARRSE Mobile app (iOS or Android)
NULL