Last weekend, troops from the battalion’s different companies in Edinburgh, Glasgow, London, Liverpool and Newcastle Upon Tyne converged on the rugged terrain of Otterburn in Northumbria to put their fighting skills to the test.

While the Para reservists conducted live firing training using machine-guns and mortars, the battlefield experience was made even more real with the support of a Chinook helicopter from Joint Helicopter Command. 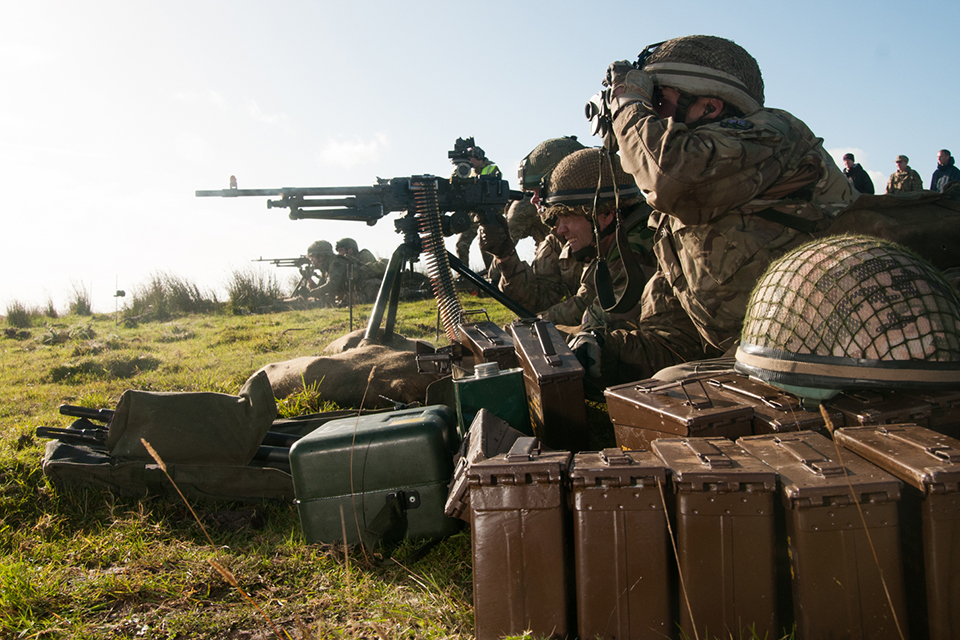 Training like this is vital for these reservists who must hone their skills as an element of the Army’s very-high readiness formation, the Air Assault Task Force (AATF).

Because when the call comes, they must be prepared, in every sense of the word, to go anywhere in the world at short notice to carry out the full spectrum of operations from war-fighting right through to stabilization.


Now that we have the same equipment as the regulars, it makes the training far more realistic. Some of our guys are on 5 days notice to move which, as a civilian, is a real challenge.

We are the only reserve infantry unit tasked with supporting 2 regular battalions at the same time. We pair with 2 and 3 PARA as they alternate between being the lead infantry unit in the AATF.
​ 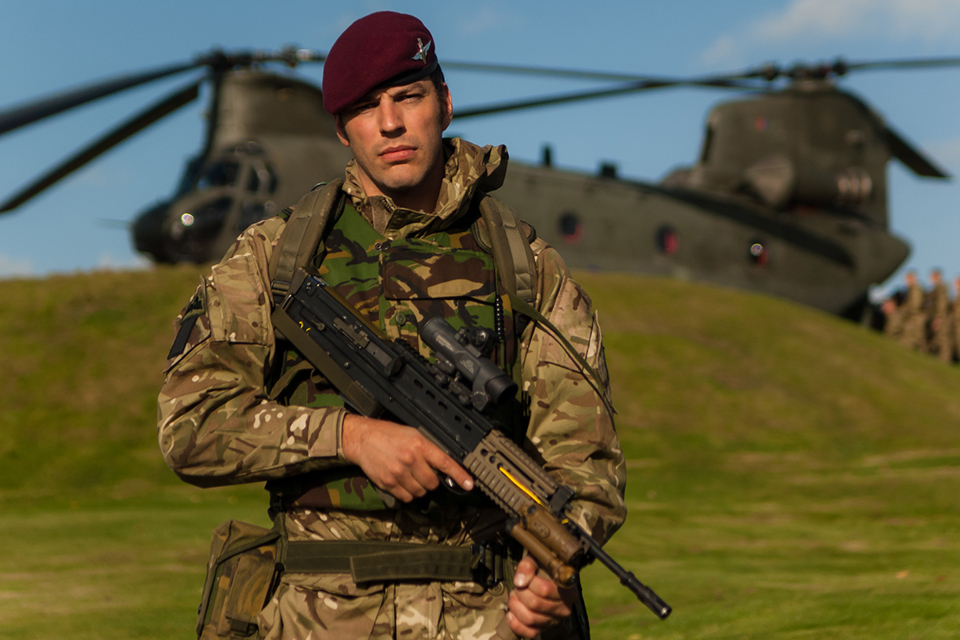 A paratrooper from B Company, 4th Battalion The Parachute Regiment training at Otterburn in Northumbria [Picture: Crown copyright]


We have to maintain our connections with the regular units because if they go anywhere, we’ll go with them. For this exercise, we have gone right back to the basics.

We are making sure that the guys’ specialist airborne infantry skills, weapon drills and ability to use the latest night vision equipment are up to scratch so they can operate side by side with their regular counterparts.
​
Among the soldiers taking part was Private Carl Toolan, a theatre technician from Salford who joined 4 PARA earlier this year. 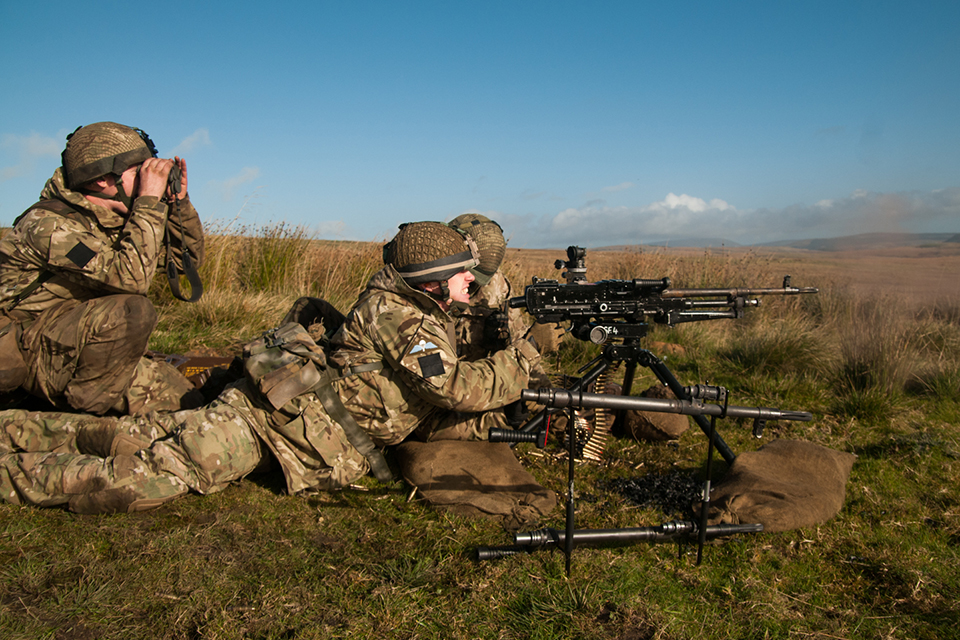 
The challenge of the Paras was something I always wanted to do and 4 PARA’s reputation appealed to me a lot. You’re trained as a regular in your spare time so I’ve got the best of both worlds now – I work full time and I’m training to be a Para.
​
Continue reading...
This is an automated feed from the Ministry of Defence website

Surely it would have been made more realistic by the non-availability of a helicopter?
"There is never a good time to leave the TA, or a bad time; but there is the right time."

I thought that was a good idea, making only one helicopter available to make the exercise as realistic as possible.

S0I said:
I thought that was a good idea, making only one helicopter available to make the exercise as realistic as possible.
Click to expand...

Which then develops suspicious 'electrical problems' around the pilots bedtime...?

Kit Reviewer
Book Reviewer
Reviews Editor
It is obviously a made up story with photoshopped pics as it is showing Otterburn and there is blue sky and no rain. Totally unrealistic - show again MoD!
Labour: For the Few, NOT the Many!
Tory: Vote for us we can ignore you better than Labour do.
I
I'm a Gammon and proud of it!

Book Reviewer
Tbf we did hunter force on Ex Trident for NATO SF in 1977, based at Otterburn and hunting in the Kielder valley under what is now the lake behind the dam they were building. Gloriously sunny. Presumably because being only one sabre squadron and command elements, the QM forgot to get out the regimental rain cloud.

Come to think of it, the following week GW troop fired their Mark 5 Ferrets there. It was so dry, the Swingfires managed to set the peat in the target area alight. That burned surprisingly well ...
Join an active Arrse Torn faction? Visit this page. www.torn.com/1954662
Hobo Wars? https://www.hobowars.com/in.php?player=2856238

Saw an Apache heading up that way last Thursday.
[SIGPIC][/SIGPIC]Tanks are easily identified, easily engaged, much-feared targets which attract all the fire on the battlefield. When all is said and done, a tank is a small steel box crammed with inflammable or explosive substances which is easily converted into a mobile crematorium for its highly skilled crew."
- Brigadier Shelford Bidwell

Auld-Yin said:
It is obviously a made up story with photoshopped pics as it is showing Otterburn and there is blue sky and no rain. Totally unrealistic - show again MoD!
Click to expand...

How much notice of the Ex did they get?

irlsgt said:
How much notice of the Ex did they get?
Click to expand...

Check out the boys in civvy hoodies in the background in the first picture.
We can dance if we want to
We can leave your friends behind
Because your friends don't dance
And if they don't dance
Well they're no friends of mine

Disco Dave said:
Check out the boys in civvy hoodies in the background in the first picture.
Click to expand...

Genuine Q, maybe for @The_Duke - why do they wear net / rubber etc on their Mk 7s?
Bravo Bravo sets himself a depressingly low standard which he consistently fails to achieve.

Bravo_Bravo said:
Genuine Q, maybe for @The_Duke - why do they wear net / rubber etc on their Mk 7s?
Click to expand...

Good question! recent operational experience tells us that rubber round the base of helmets makes a distinctive line that snipers use and was outlawed on HERRICK.
We can dance if we want to
We can leave your friends behind
Because your friends don't dance
And if they don't dance
Well they're no friends of mine

It can also turn your grid into a rubber toastie in the event of an IED strike or vehicle fire.


Tapped in morse code on the radiator.
I'm not happy about our position in the narrative structure of this war.

'Black Jaguar'. How gay is that?

Victorian_Major said:
'Black Jaguar'. How gay is that?
Click to expand...

I'm fairly certain Otterburn is in Northumberland, not Northumbria
And usually overcast and miserable, except in summer when its just miserable
"of course it's fcking right, I checked it on Google"
Albert Einstien


"That's either a really big goat, or a really small piano"
Sun Tzu

Bravo_Bravo said:
Genuine Q, maybe for @The_Duke - why do they wear net / rubber etc on their Mk 7s?
Click to expand...

And Mk 6/6As. Modern tradition. Not permitted on ops.