Ministry of Defence said:
Bowing out after 3 decades and with more than 793,500 miles of global operational service under her belt, the ship has sailed into Ocean Terminal in Leith today, 15 May, for a week-long celebration of her 30-year affiliation with Scotlands capital city.
Affectionately known as The Fortress of the Sea, HMS Edinburghs final sojourn in her twinned city promises to be one of pageantry, poignancy and celebration of a close relationship which has meant much to the thousands of sailors who have served on board during that time, as well as to the city folk who have repeatedly welcomed her back to her spiritual home.
On Friday, 17 May, members of the crew, at the invitation of Edinburgh City Council, will exercise their freedom of the city with a privilege parade through the citys historic streets and the city will then further honour her long and strong relationship with the ship by hosting members of the crew at a special reception in the councils City Chambers. 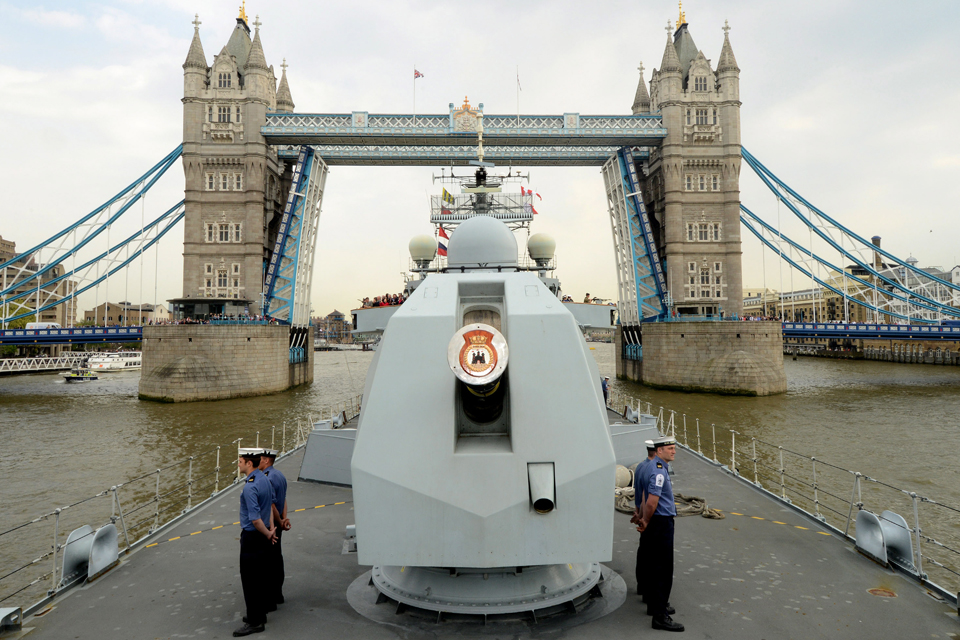 Sailors on the upper deck of HMS Edinburgh as she passes under Tower Bridge on her final visit to London [Picture: Leading Airman (Photographer) Keith Morgan, Crown copyright]The pomp and ceremony, however, give way to more informal hospitality on Saturday, 18 May, as the ship throws open her gangway for the final time to the Edinburgh public from 11am to 5pm.
It is a not-to-be-missed opportunity and members of the crew are looking forward to welcoming everyone on board and chatting to them about their experience of the Senior Service, life on board HMS Edinburgh and the role of the modern Royal Navy in protecting the nations interests around the world.
Shoreside during this open day, there will also be a variety of information stands about various aspects of the Royal Navy located in the cruise liner car park adjacent to the ship, and there will be displays by a Royal Marines Band, Edinburgh Sea Cadets and members of the Royal Marines Reserves, who will be demonstrating unarmed combat. 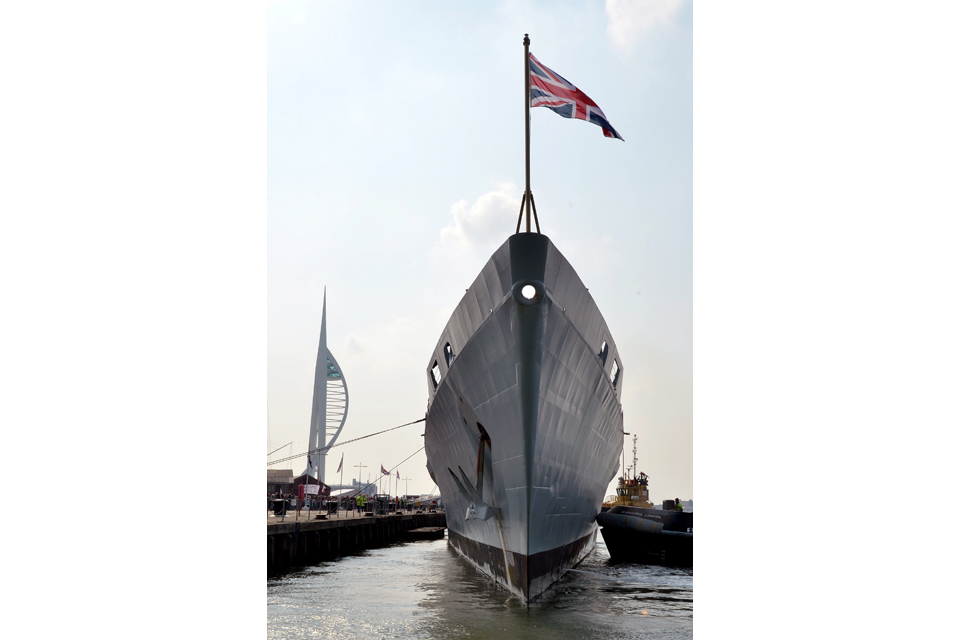 HMS Edinburgh arriving in Portsmouth as part of her final tour around the UK [Picture: Leading Airman (Photographer) Gary Weatherston, Crown copyright]In addition to these highlights, many local groups have been invited on board for organised tours during her time in port, particularly on Sunday and Monday  these include Sea Cadet units from Edinburgh, Leith, Musselburgh, Queensferry and Grangemouth, members of Fettes College Combined Cadet Force, local Boys Brigade groups, and Edinburgh and West Lothian Colleges.
HMS Edinburghs Commanding Officer, Commander Nick Borbone, said:

There is no easy way to bid farewell to a strong affiliation like the one HMS Edinburgh has enjoyed with this most historic city. Scottish hospitality is legendary and, throughout the 3 decades of service which this ship has given, the fondness shown to HMS Edinburgh by the city has grown stronger and stronger.
Such support cannot be underestimated and, while we will of course feel much sadness, it is also a time for celebration of this long relationship and the great service of this fine ship.
We are absolutely honoured to be invited by Edinburgh City Council to exercise our freedom of the city with a privilege parade on Friday and hope that local people will come out to support the ships company as it marches through the streets.
And on Saturday from 11am to 5pm we look forward to repaying just some of the kindness and support we have had over many years by welcoming local people on board HMS Edinburgh for the final time. I know that my crew and I are particularly looking forward to meeting everyone.
​ 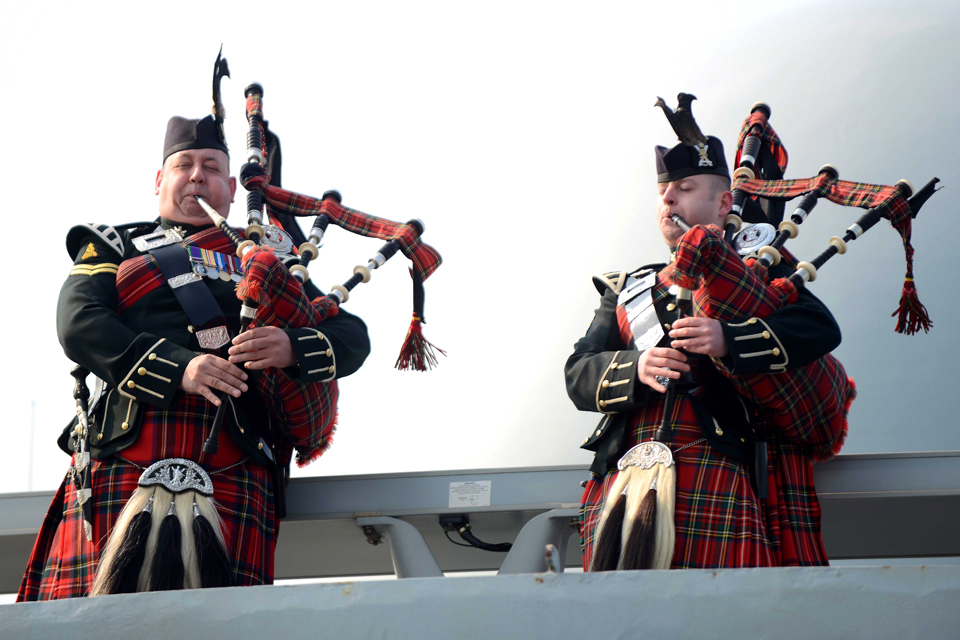 HMS Edinburgh has had a long and close association with the city since her launch in 1983. In the 30 years since, she has ranged far and wide in support of British interests across the world, including action in the second Gulf War.
In view of this significant contribution and that of the many hundreds of personnel who have served aboard with such distinction, it is my great honour to confer the Freedom of the City of Edinburgh upon The Fortress of the Sea.
Having been aboard for the first, and last, time this week, I would encourage members of the public to take one final opportunity to visit the ship at her berth in Leith on Saturday and to say their farewells.
​ 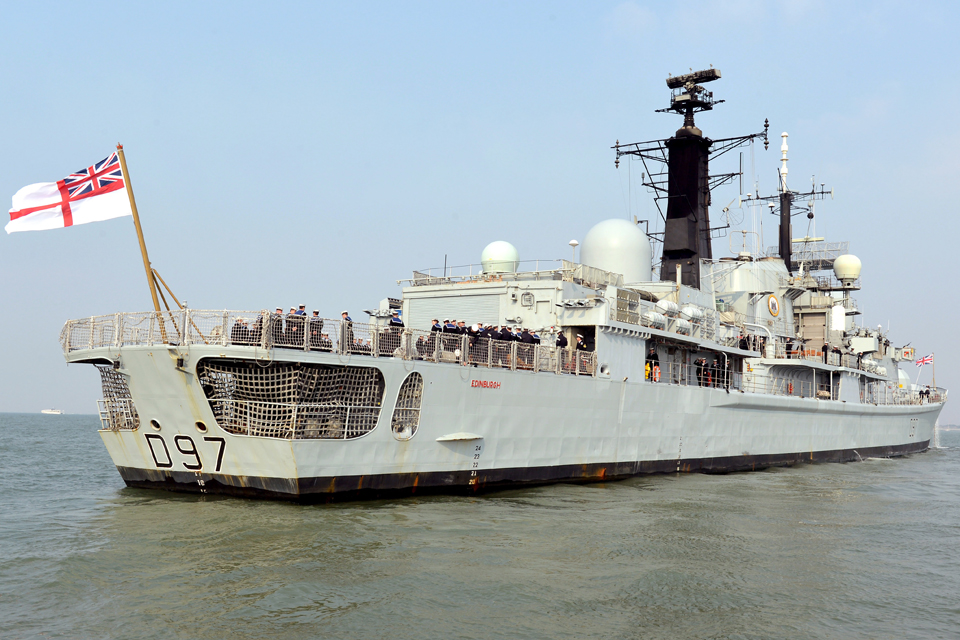 HMS Edinburgh arriving in Portsmouth [Picture: Leading Airman (Photographer) Gary Weatherston, Crown copyright]HMS Edinburgh recently returned to the UK from her final deployment  6 months patrolling the Atlantic. She left her home port of Portsmouth in September 2012 for routine operations across the North and South Atlantic in support of British interests worldwide.
During this time, Edinburgh carried out maritime security operations around the British South Atlantic Islands and supported counter-narcotics efforts off West Africa. The deployment also included a number of goodwill port visits in South Africa, the Caribbean and the Americas.
HMS Edinburgh was launched at Cammell Laird shipyard on the Mersey on 14 April 1983 and commissioned into the fleet on 17 December 1985.
As HMS Edinburgh sails towards her final sunset, it is by no means the end of the strong bond between the city of Edinburgh and the Royal Navy, as the new supercarrier HMS Queen Elizabeth will take over the affiliation with the capital. 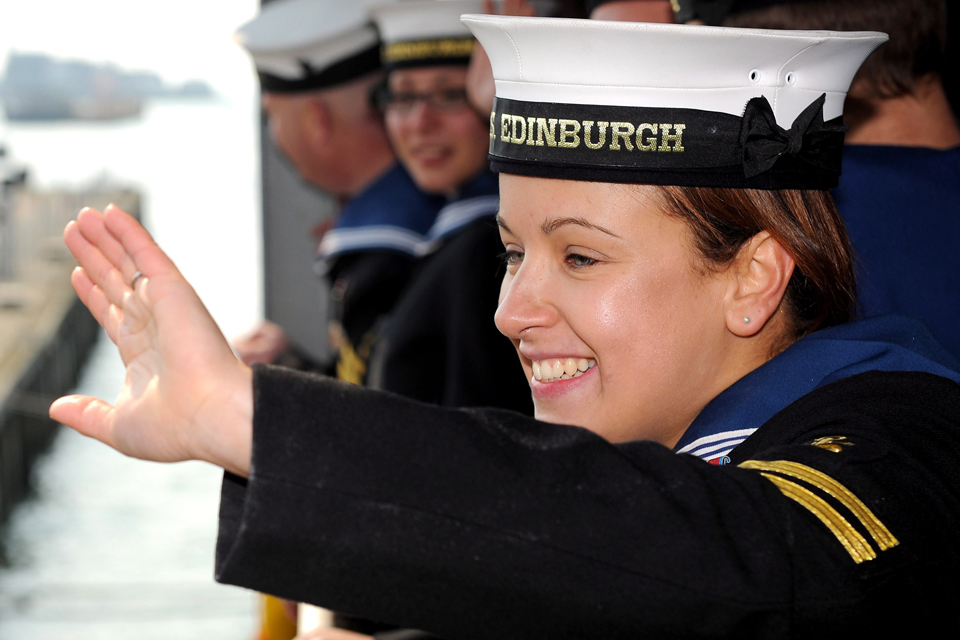 A sailor on board HMS Edinburgh waves as the ship arrives in Portsmouth [Picture: Leading Airman (Photographer) Dan Rosenbaum, Crown copyright]For more than 40 years the Type 42s have patrolled the worlds oceans on behalf of the UK, protecting the nations interests both in home waters and further afield.
As HMS Edinburgh bows out of service she hands over this mantle to the new state-of-the-art, ultra-capable Type 45 Daring Class destroyers  all built on the Clyde.
HMS Edinburgh will sail from Leith on Tuesday 21 May for the final time, leaving her berth at approximately 11am.

P
Merkel the final year - what will be her legacy?
2