The resting places of Second Lieutenant (2Lt) Norman Frederic Surry and Private (Pte) George Skilbeck have been marked a century after their deaths in the Great War. The rededication service took place on 10 October at the Commonwealth War Graves Commission (CWGC) Montay-Neuvilly Road Cemetery near Cambrai in northern France.

The service was organised by the MOD’s Joint Casualty and Compassionate Centre (JCCC), part of Defence Business Services, and was conducted by the Reverend Tim Flowers CF, Chaplain 4th Battalion The Mercian Regiment.


It has been a privilege to organise this service and to have this opportunity to honour the sacrifices of 2Lt Surry and Pte Skilbeck 100 years after their deaths. As we mark the centenary of the armistice which ended the First World War next month, it is important not to forget the individual stories of these men who left their families and gave up everything to fight for the peace and freedom that we now enjoy.
​ 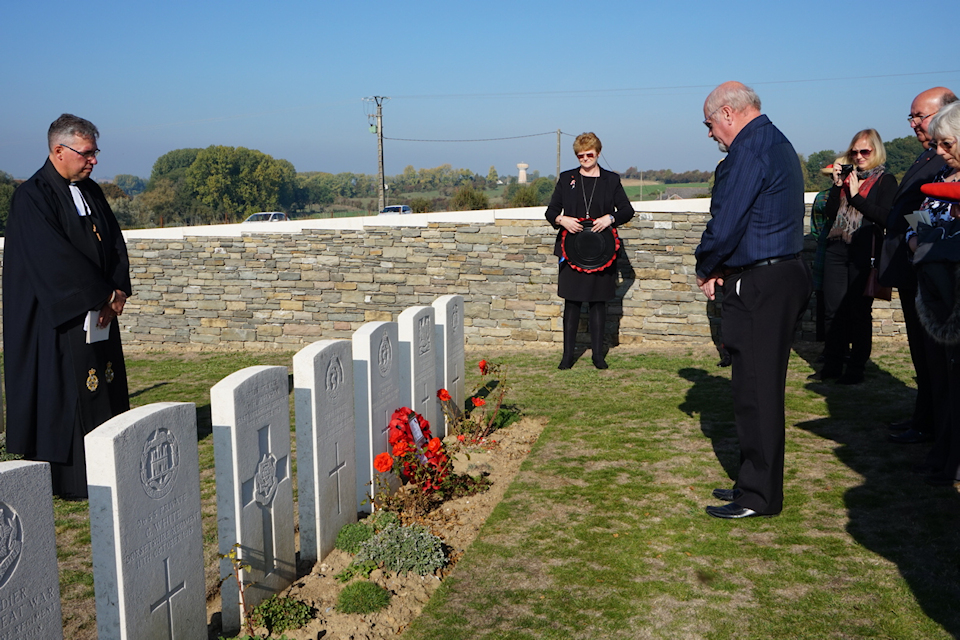 
It is wonderful that we are finally able to give both these men the recognition that they deserve, and that their families now know the exact location of their final resting place. Now known to the family as well as known unto God.
​
2Lt Surry was serving with 16th Battalion The King’s Royal Rifle Corps (KRRC) when he was killed on the morning of 12 October 1918, aged 25. The Battalion had been ordered to capture german positions on the Le Cateau to Solesmes railway line and had marched north east of Troisvilles to their assembly point west of the River Selle. 2Lt Surry was killed early in the attack which was ultimately successful.

Pte Skilbeck was killed on 11 October 1918 whilst serving with 53rd Field Ambulance, Royal Army Medical Corps (RAMC), aged 34. It is believed that he was killed between the front line at Neuvilly and the village of Inchy.

The service was attended by Pte Skilbeck’s grandson Tony and his family. 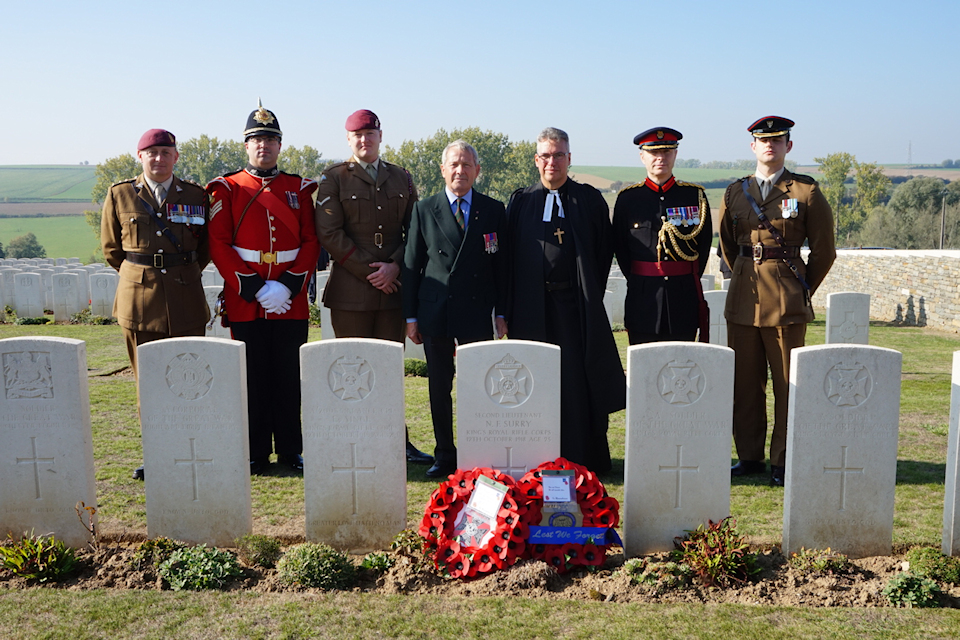 Members of the RAMC, The Mercian Regiment and The KRRC Association, at the graveside of Second Lieutenant Surry, crown copyright all rights reserved.


We are extremely grateful to the MOD’s JCCC, CWGC and the researcher, Michael Lowe, whose research and hard work have made this service possible. We thank all those whose efforts ensure that the sacrifice made by George Skilbeck, and those like him, will never be forgotten.

We are pleased that my grandfather, having been an “Unknown Soldier” for a 100 years, is now identified and properly recognised for the brave man that he undoubtedly was.
​
Also in attendance were representatives from 16 Medical Regiment, RAMC, and the KRRC Association. Both men are commemorated on the Vis-en-Artois Memorial to the Missing and left behind young families who were faced with the uncertainty of not knowing where their loved ones were buried.

The final resting places of these 2 soldiers came to light after a researcher submitted evidence regarding their whereabouts. Further investigation was undertaken by the JCCC and the National Army Museum to corroborate the submitted evidence and the identification of the ‘Unknown Soldier’ graves were finally confirmed by the JCCC.


Second Lieutenant Surry and Private Skilbeck were recovered from the battlefield and buried in the Commonwealth War Graves Commission’s Montay-Neuvilly Road Cemetery. Thanks to the dedicated efforts of a researcher, we are privileged to be able to mark their graves with headstones bearing their names and personal inscriptions chosen by their families.
​
Two new headstones bearing the names of 2Lt Surry and Pte Skilbeck have been provided by the CWGC, who will now care for their final resting places in perpetuity.

News story: Graves of Two Kent Soldiers Identified a Century After Their Deaths in the Great War