With the centenary of the armistice which ended the First World War now only a month away, it has been a privilege to organise these services and to reflect on the bravery of these 2 men.

Lt Butt was killed at the start of the great war, LCpl Courtney at the end. Their deaths represent 2 very different phases of the war: 1 of optimism and excitement, the other of weariness and relief that it would soon be over. Today we honour their commitment to duty and join with their families in honouring their sacrifice.
​
Lieutenant John Gillis Butt MB


This was a wonderful service and I am thrilled to know that John has finally been put to rest. The service was made extra special by the presence of so many people. It has brought closure to all the family.
​ 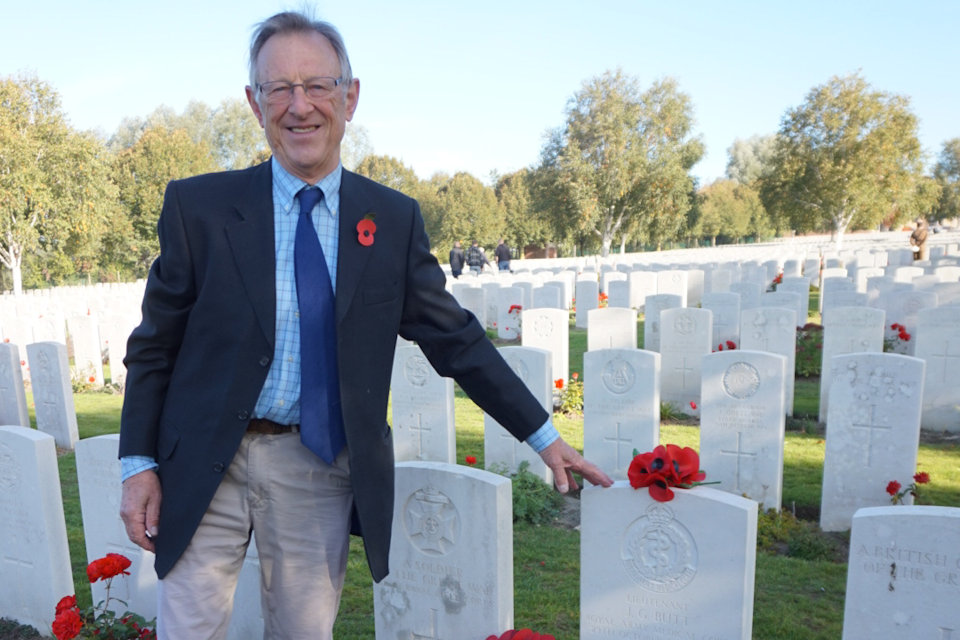 Nicolas Previté at the graveside of his great uncle, Lieutenant Butt, Crown Copyright, All rights reserved

Lt Butt was commissioned as a newly qualified doctor into the RAMC on 31 July 1914, aged 24 and just 4 days before the outbreak of the First World War. He was attached to 1st Battalion Grenadier Guards and disembarked in Belgium on 7 October 1914. Within a few weeks he found himself on the frontline of the First Battle of Ypres.

On the morning of 29 October 1914, the Germans attacked the positions of 1st Battalion Grenadier Guards near the village of Gheluvelt. Lt Butt and his orderly were tending to a wounded senior officer when they were shot and killed by the enemy. Now behind German lines, his body was not recovered until after the war, and he was listed as missing until his death was presumed in 1916. He is commemorated on the Menin Gate and was buried as an unknown Lieutenant of the RAMC. 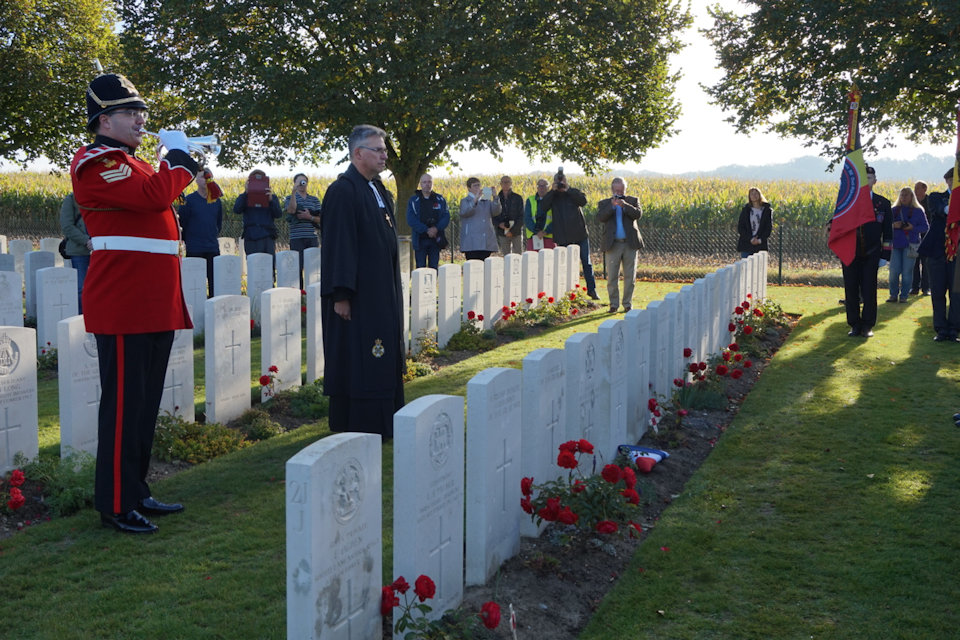 
As we approach the 100th anniversary of the end of the Great War, it is a great testament to the work that continues to be done to identify and honour those who fell all those years ago. For the family of Lt John Gillis Butt, it brings to an end a story that began at the very beginning of the war. Although the family have known that he had fallen, it is fitting that they now know his final resting place and that we are able to give him the service that his service so richly deserved. Now known to the family as well as known unto God.
​
Lance Corporal (LCpl) Leonard Thomas Courtney


LCpl Courtney was serving with 4th Battalion The Worcestershire Regiment when he was killed near Stasegem on 20 October 1918, he was 23 years old. Just 3 weeks before the end of the Great War the German Army was all but defeated as the stalemate had been broken and the Allies were advancing eastwards. 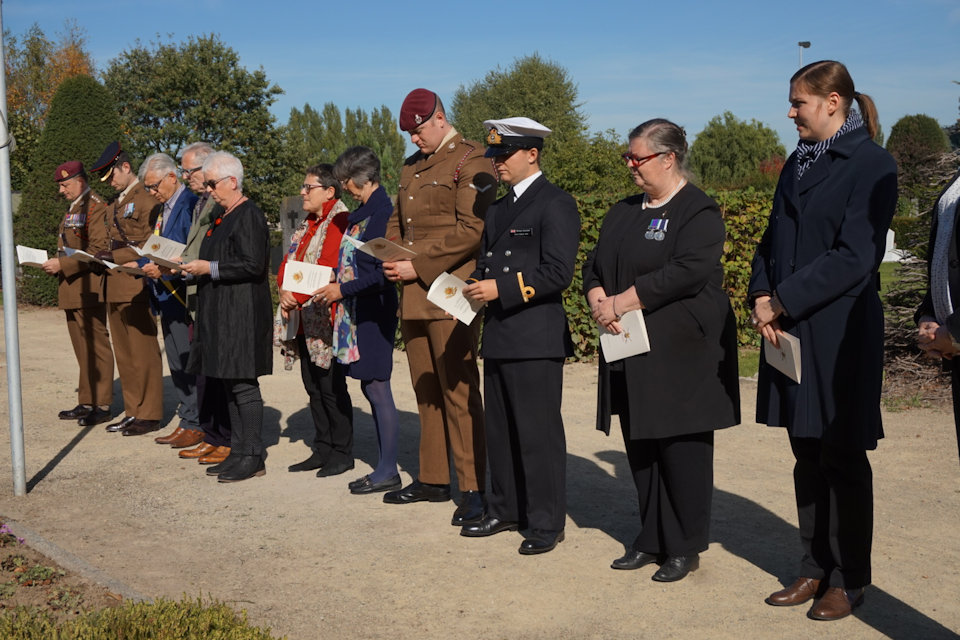 Representatives from the Mercian Regiment and the British Embassy attended the rededication service for Lance Corporal Courtney, Crown Copyright, All rights reserved

LCpl Courtney was buried in Stasegem Communal Cemetery as an unknown Lance Corporal of The Worcestershire Regiment and commemorated on the Tyne Cot Memorial.

The service at Stasegem Communal service was attended by his great niece, Jan Courtney, and nephew, Doug Courtney, as well as representatives from the Mercian Regiment. 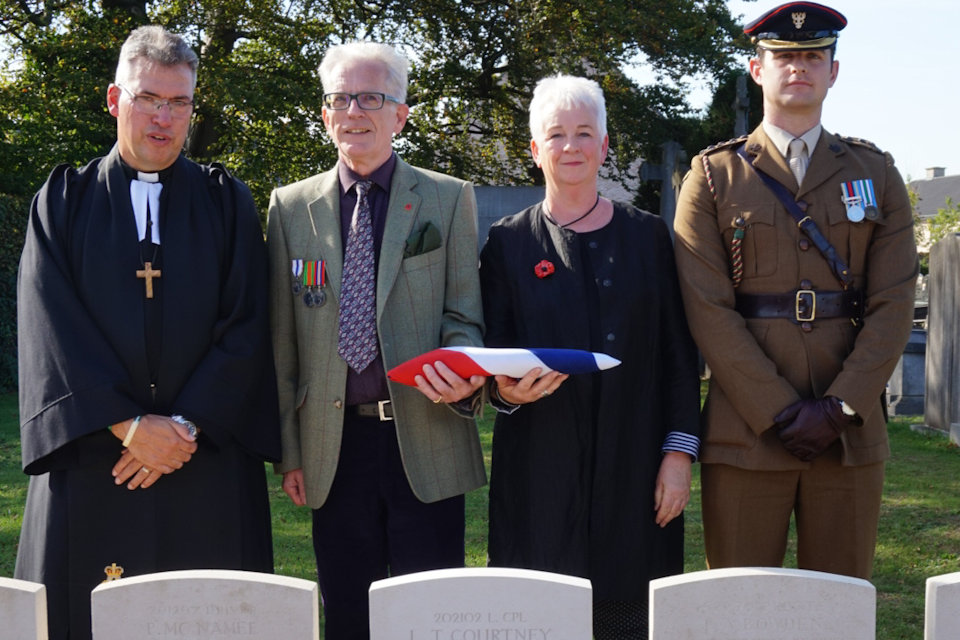 Douglas and Jan Courtney at the graveside of their great uncle, Lance Corporal Courtney, Crown Copyright, All rights reserved


In a few weeks’ time we will commemorate the 100th Anniversary of the end of the Great War. Somehow when we remember those who lost their lives so close to the Armistice it seems even more poignant. For the family of Thomas Courtney, the heartbreak must have been even harder to take. Today it is a real privilege as Padre to 4 Mercian that I can acknowledge the life and sacrifice of Thomas Courtney who was a member of one of our antecedents The Worcestershire Regiment. Now known to the family as well as known unto God.
​
Research and confirmation by the JCCC

The final resting places of the 2 soldiers came to light after a researcher submitted evidence regarding their whereabouts. Further investigations were undertaken by the JCCC and the National Army Museum to corroborate the submitted evidence and the identification of the ‘Unknown Soldier’ graves were finally confirmed by the JCCC.


The Commonwealth War Graves Commission remembers the grief and loss felt by the families of Lieutenant Butt and Lance Corporal Courtney a century ago. We are privileged that their descendants are here today in the CWGC’s Hooge Crater Cemetery and Stasegem Communal Cemetery to rededicate their graves. Each is now marked with a named headstone bearing a personal inscription chosen by their family. The CWGC will care for their graves on their behalf, in perpetuity.
​
Continue reading...
This is an automated feed from the Ministry of Defence website

News story: Grave of Royal Welsh Fusilier identified a century after his death in the Great War