The 6 servicemen carried out a variety of ceremonial duties during the match; a classic final which saw Arsenal lift the cup after a tense game that went into extra time.

Their duties included carrying the FA Cup onto the pitch ahead of the teams walking out and carrying the cup, and the winners and runners up medals, to the royal box, where the trophy was presented.

They were joined in the stadium by the Band of the Welsh Guards who performed the music for the hymn Abide with Me and the national anthem, which are traditionally sung before kick-off.

Liam O’Grady, a Royal Navy medic currently based on HMS Drake, carried the FA Cup trophy to a plinth on the pitch before the teams came out. 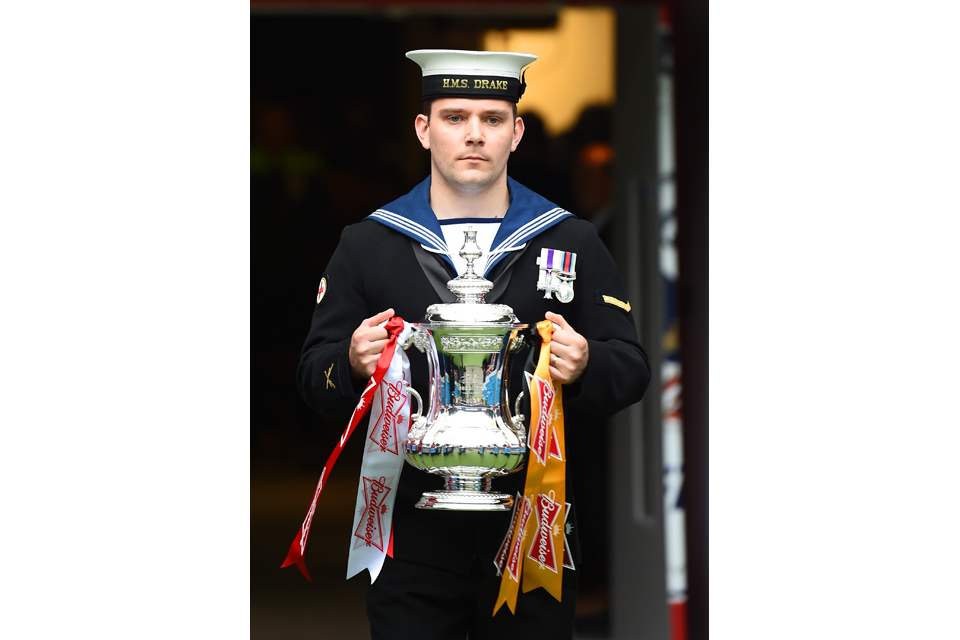 Speaking before the match, Liam, who was awarded the Military Cross in 2012, said:


Being a Walsall fan, I never thought I’d get to an FA Cup final, but I have made it and I am proud to be here for the navy.

To walk out in front of 90,000 football fans will be pretty daunting, but it is all about the football, so the players will be feeling the pressure more than me.

It’s a really good idea for military personnel to be able to take part in an event like this; young people in the stadium seeing someone in uniform might inspire them.
​
Each of the 3 services that make up the armed forces were asked to nominate personnel for the final; they were also able to watch the match accompanied by a guest of their choice.

Danny Dixon, who serves with the RAF and carried the winners medals to the royal box, said:


It’s a great honour to be picked out of the thousands that could have been chosen. I am captain of the RAF football side, so this is a dream come true.

I am a massive football fan and was looking forward to walking up the steps. I have seen many people do it in the past, now I will be one of them.
​
Army reservist Lance Corporal Daniel Dixie of the London Regiment added:


I feel extremely lucky; this is my first time at Wembley. I was a bit nervous, but I enjoyed it. I am very proud to represent the Army.
​
All the servicemen who took part in the final received a massive cheer from the 90,000-strong crowd and performed their duties with the professionalism and expertise the British armed forces are famous for.

RIP
Hot off the press.

A shining star of a man.
A king was asked to describe a happy man and he replied: "A man that I do not know and a man that does not know me."

When I was stationed at Bulford, one of our lads had a contact at Chelsea Barracks who worked for Wembley's security firm, doing cup finals, international fixtures and other events. They needed extra stewards for the 1996 European Championships, and some of our lads got the job. I even spotted one of them while watching an England match on tv.
NULL

How the English can Help Celtic Soccer!
2