Ministry of Defence said:
It is nearly time for the Desert Rats, as members of 7th Armoured Brigade are known, to return to the desert. Although, this time, the desert that the famous brigade will be heading to is in Helmand province, where they will be taking over the role of Task Force Helmand (TFH).
The deployment on Operation Herrick 19 will see personnel from all 3 Services working closely with 3/215 Brigade of the Afghan National Army. And, as is the norm, the media were invited to Salisbury Plain to see some of the skills that the Rats have honed over an extensive period of pre-deployment training.
Media days tend to illustrate the main role that the troops will be playing during their tour. Not long ago the event would have had a dramatic pyrotechnic theme as troops displayed their patrolling and soldiering skills; helicopters would worry their way into contested areas to pick up the wounded.
The media day for Herrick 18 on a snow-swept Salisbury Plain focused on troops working with the Afghan Army and Police, advising and mentoring them and helping them to develop their skills. 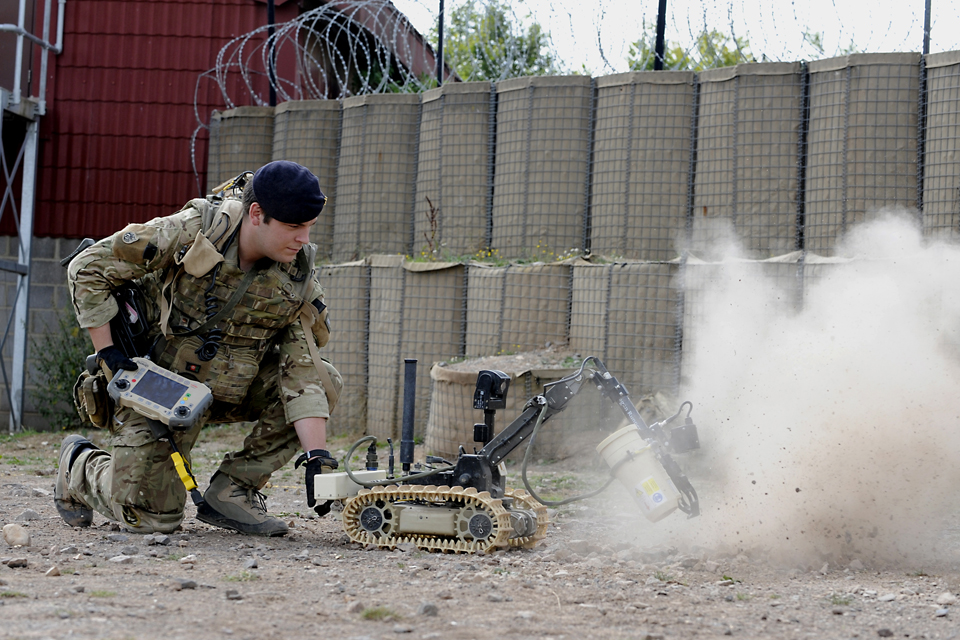 In preparation for the tour I visit Afghanistan often to talk to those doing the job there at the moment, and it is clear to me that there has been great progress.
The Afghan Army in Helmand are without doubt showing themselves to be brave, competent and able to plan and conduct their own complex operations, the vast majority of which are conducted with no support from ISAF.
The police have clearly benefited from the concerted training effort over the years.
​
The success that has been seen in transferring responsibility for security to the Afghan National Security Forces (ANSF) and the development of public trust in their government has meant that the current Task Force has been able to press ahead with disengagement and to close those bases for which there is no longer any operational need:

I fully expect that this process will continue, said the Brigadier. As a result the force that I deploy with will be smaller. As I take over, the full force numbers will be about 6,000, falling to 5,200 by the end of the year.
​ 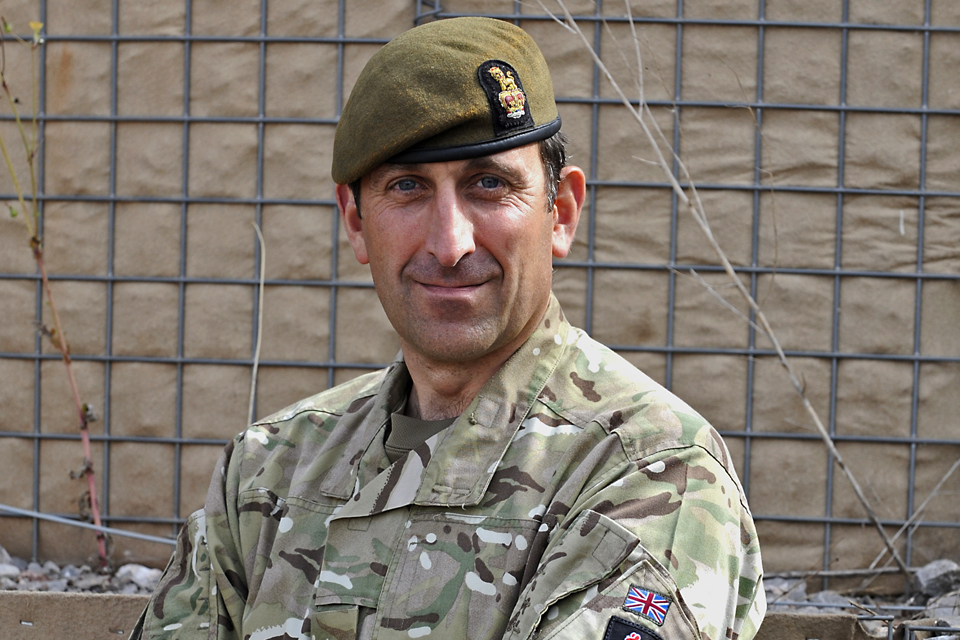 Brigadier James Woodham, Commander of 7th Armoured Brigade [Picture: Richard Watt, Crown copyright]Brigadier Woodham said that he expected Herrick 19 would see the ANSF continuing to develop and that TFH would work with them only when required, with the focus being on increasing their independence and sustainability:

I fully expect in my time to conclude the process of closing and transferring the UKs bases in Helmand. And as this process takes place we will be able to redeploy more of our people and equipment back to the UK and to Germany.
​
Which is why the showpiece of the day was the breaking down of a patrol base. Of course, in itself this is nothing new. British troops have been breaking down bases for generations.
But, whereas in years gone by the field guns and equipment would have been moved out on horseback, yesterday it was an upgraded RAF Chinook Mk4 helicopter, dubbed the workhorse of the skies, that took the strain of lifting a 105mm light gun, while a demountable rack offload and pickup system (a big army lorry) hauled away the more standard items.
An Apache attack helicopter provided air cover while an outer ring of Ridgback armoured vehicles and an inner platoon of soldiers held the ground secure as sappers dismantled a watchtower. 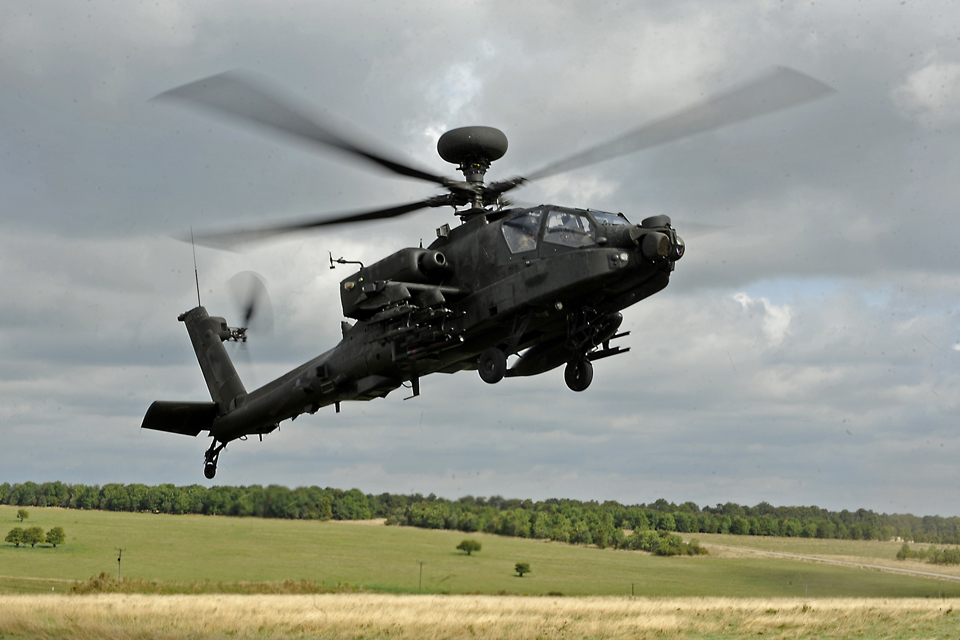 An Apache attack helicopter providing air cover during the media day on Salisbury Plain [Picture: Richard Watt, Crown copyright]It was an important reminder that, while this tour for UK troops will be less kinetic and more advisory than in the past, basic soldiering skills must nevertheless be maintained to the highest level:

What you will see today is our chance to polish our skills, before using them for real in Helmand, said Brigadier Woodham. Im pleased to say that the training progression has gone from strength to strength, and the training my soldiers have received has been first class, hugely realistic and challenging.
The training for Afghanistan which has been delivered by the Army has been really well-focused; we dont just roll out the same training as last time. The training organisations work really hard to reflect the sorts of roles that the troops are going to do.
All the way through it was clear that Herrick 19 was going to be different. Therefore thats been bedded into all the training courses and exercises and Im confident that our soldiers are prepared for whatever will come their way.
​ 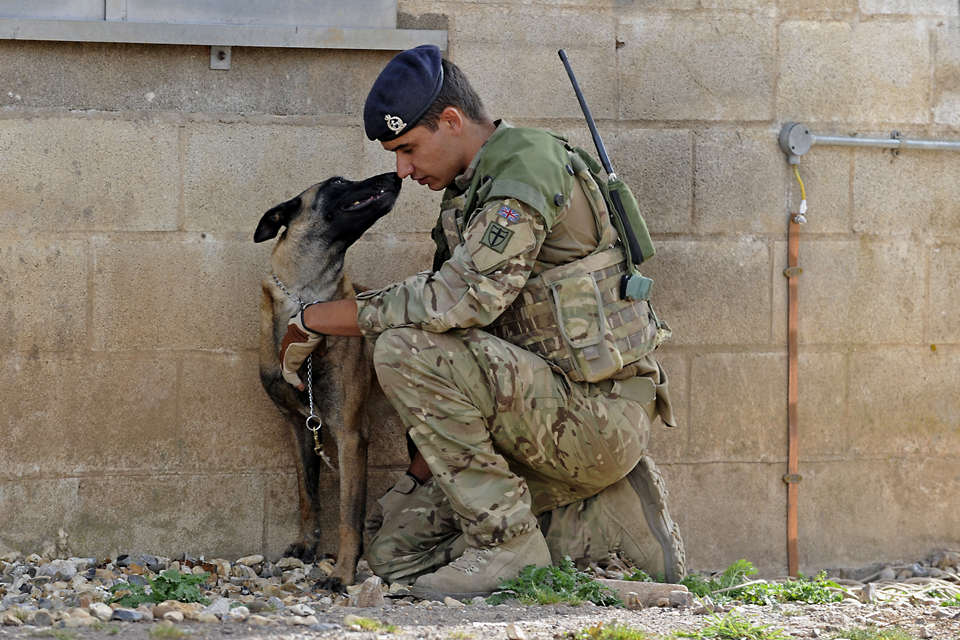 Private Danny Greenhalgh, from the Royal Army Veterinary Corps, with his military working dog Amy, a 4-year-old Belgian Shepherd [Picture: Richard Watt, Crown copyright]That was certainly an opinion that was echoed by the soldiers manning the stands:

Its my first tour, said Lance Corporal James Carstairs, part of a 2 Medical Regiment combat medical team. I feel prepared for everything to do with my job, and Im very comfortable about going.
​
Another first-timer will be reservist Lieutenant Jabez Crisp, a watchkeeper in 2 Logistic Support Regiment. It will be his job to keep a close eye on the movements of the logistic convoys as they supply troops and bring back kit and equipment from those bases that are closing or being handed over. He said:

I admit to a healthy level of stage fright. But Im very ready to go.
​
There was another army asset that could not be displayed on the day, but to which the Brigadier wanted to pay tribute:

I must mention some unsung heroes, our families, he said, for on the eve of deployment they too are preparing for the challenges that lie ahead. But they are not alone. Each unit has on hand a dedicated team to assist and help make the time pass as painlessly as possible.
​

Is this where I dismissively post "Soldiers go off to fight"?

(Actually, I wish them all the best of luck and a safe return, especially any mates in 11 EOD Regt)
J

one of the last times before they lost the armoured name.
Someone here once said I should be culled, well same to all you haters! May you burn in your hate!