Ministry of Defence said:
Change is blowing through Helmand. It is not just the change that can be seen in the number of schools now open in the province, nor in the economic improvements being enjoyed by its urban population. It is not even just the increasing freedom of movement that Afghan citizens have as their own security forces incrementally take responsibility for their countrymens safety. It is, however, an important change in that it speaks of the progress being made there; perhaps even more eloquently than the statistics about the numbers of International Security Assistance Force (ISAF) patrol bases being closed or handed over to the Afghan National Security Forces (ANSF), or the fact that 40% of Afghans now have mobile phones or, that thanks to a fibre-optic link, there are 4-million subscribers to the internet. 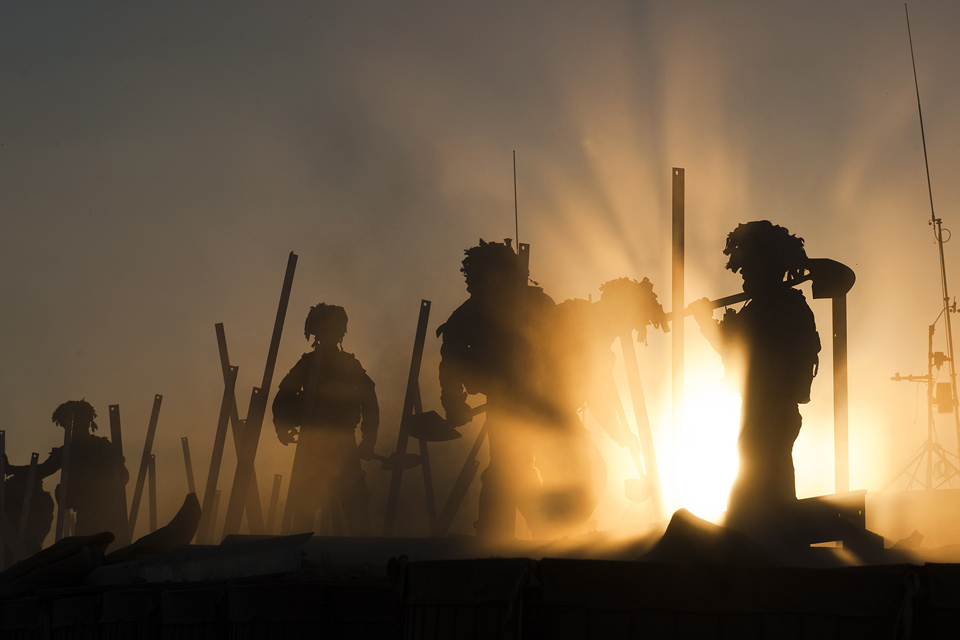 Sappers from 21 Engineer Regiment Royal Engineers work into the early evening to strip out one of the accommodation buildings at Patrol Base Nahidullah (library image) [Picture: Corporal Jamie Peters, Crown copyright][h=3]Afghan Forces mature[/h]This change is also in the way that the UK military talk about their Afghan colleagues. It was clearly apparent during ISAF Deputy Commander, Lieutenant General Nick Carter, and Brigadier Bob Bruces briefing to the media yesterday in MOD Main Building. Also at the briefing were Lieutenant Colonel Matt Jackson, Commanding Officer (CO) of 40 Commando Royal Marines, and Lieutenant Colonel Ben Wrench, CO 1st Battalion The Royal Regiment of Scotland.
Never disrespectful but always grittily honest, 2 years ago these briefings would talk about the natural courage and determination of the soldiers of the Afghan National Army. But this would be balanced by observations that basic soldiering skills and military discipline were as yet lacking. As these things improved, the talk was of developing leadership skills, organisational infrastructures and capabilities such as logistics. Even 6 months ago, reports would tend to focus on the pace of progress being made by the ANSF, the nature of the ISAF role becoming one of partnering and mentoring as the Afghans increasingly took the lead in planning and executing their own operations. That narrative continues, and the role is now described as training, supporting and assisting; only offering combat support on a limited basis when asked for it. 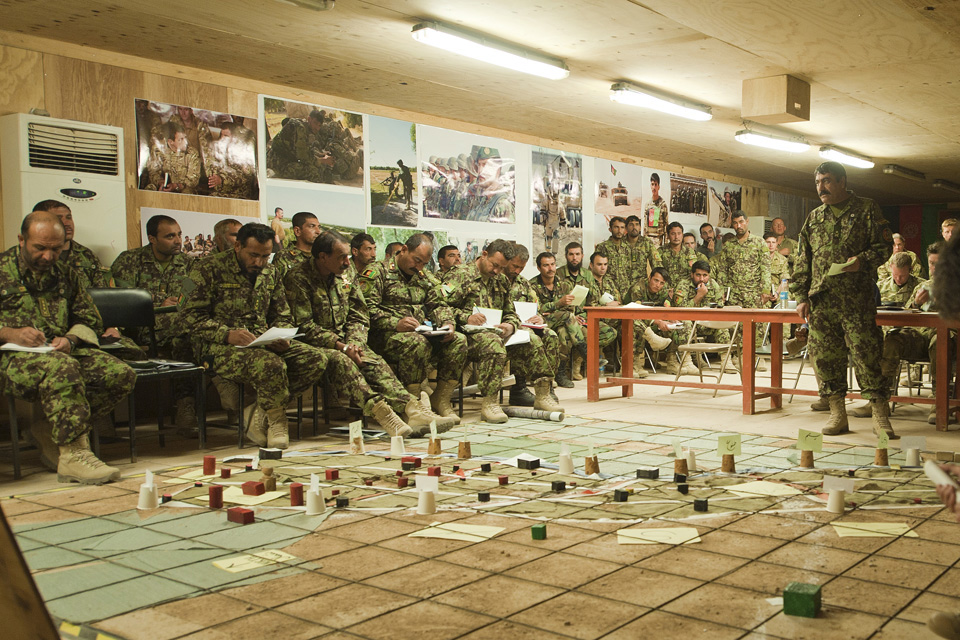 It is absolutely the case that the Afghans will be ready to assume the responsibility for the security need at mast end 2013 and secure their population during the election in 2014. We are also confident that they will be able to assume complete responsibility by the end of 2014, because their capability has come on significantly in the last year or so. If I was talking to you a year ago I would only be able to report that of their 25 brigades only 1 of them would have been graded effective or independent. I am now able to report that some 20 of their brigades are capable of acting independently or are effective with advisers.
​
[h=3]Pride and professionalism[/h]But, significantly, how that relationship is expressed has changed. When Brigadier Bruce, Commander Task Force Helmand and 4 Mechanized Brigade for UK operations in Afghanistan under Operation Herrick 17, from October 2012 to April 2013, referred to the ANSF, it was with a clear conviction that he talked about an organisation of fellow professional soldiers. Professionals who had in common the same set of values - national pride, esprit de corps, determination and a will to win. 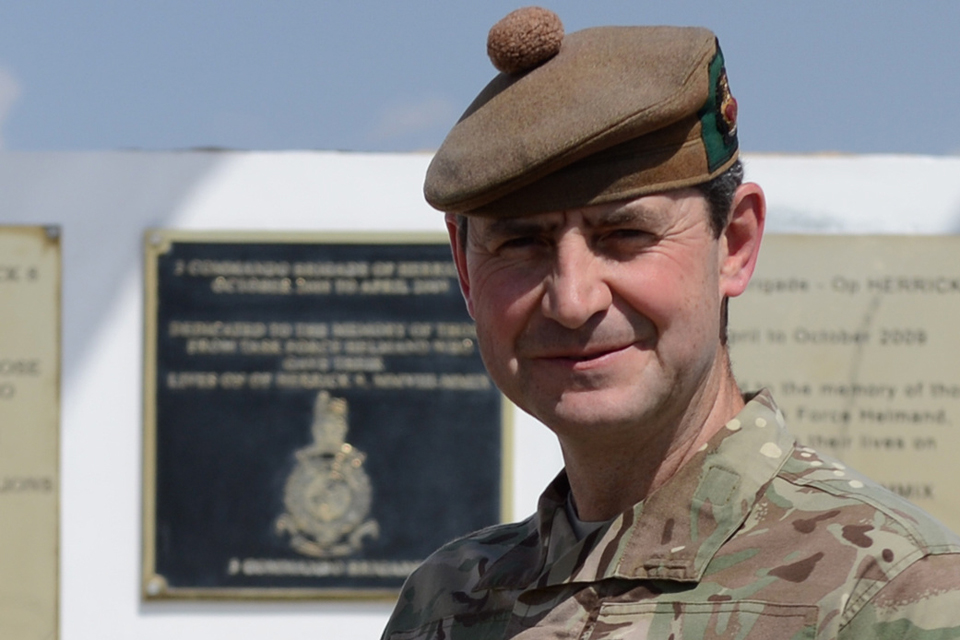 Brigadier Bob Bruce, Commander of Task Force Helmand during Operation Herrick 17 (library image) [Picture: Sergeant Barry Pope, Crown copyright]In answer to media questions about whether the ANSF would be ready to cope on their own by the end of 2014, all 3 senior officers regularly began their replies with comments such as, Do not underestimate the ANSFs level of national pride Do not underestimate the ANSFs determination to win.
With a good deal of respect and admiration for his Afghan colleagues, Brigadier Bruce said this:

Without exception, their reaction to set backs and knocks including when they suffer casualties is to stiffen their resolve, even after a really tough fight. They do not give up lightly.
​ 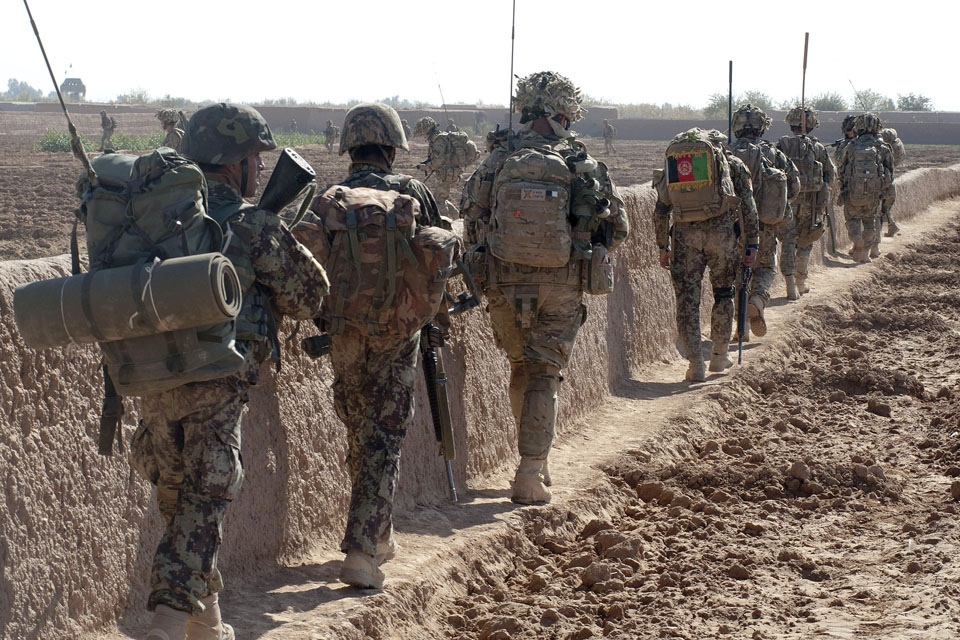 A patrol of Afghan National Army warriors along with a soldier from the 1st Battalion Royal Regiment of Scotland in Helmand province (library image) [Picture: Corporal Jamie Peters, Crown copyright]The Brigadier described the ANSF as a sophisticated force who can take the germ of an idea, plan it out, rehearse it and carry it out. They can sustain it, recover their forces and respond to threats. It was because of all these qualities that he believed, by 2014, the situation in Helmand province would be such that the Taliban would not be able to regain a foothold, nor would the citizens be prepared to let them.
Brigadier Bruce paid tribute to those British troops who had served in Afghanistan before him and said:

The development of the ANSF is sustainable because successive British Task Forces have focussed on training the Afghan trainers and now, increasingly Afghan trainers are instructing their own people.
​ 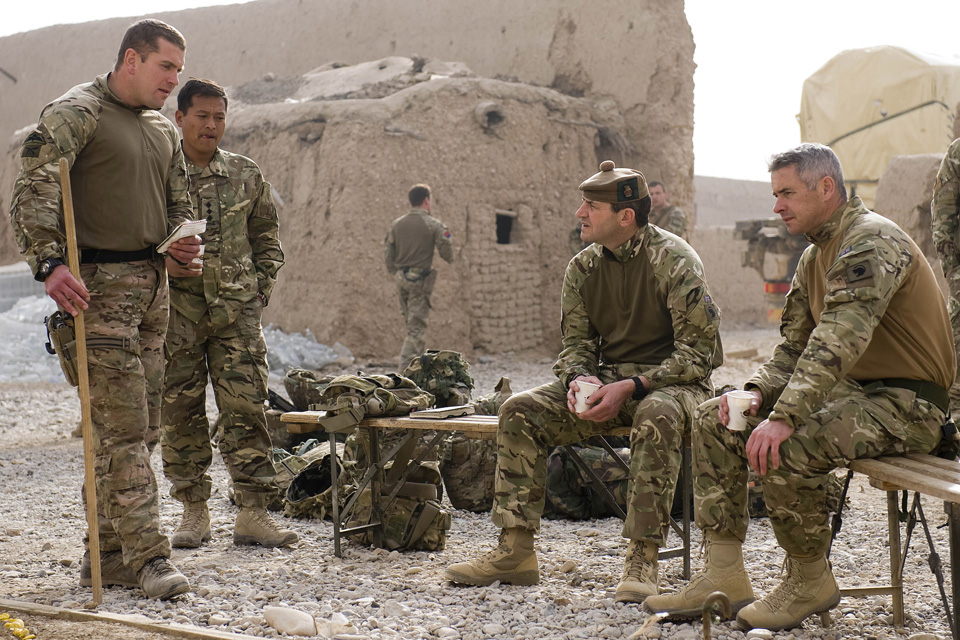 Major Shane Burton of The Royal Gurkha Rifles briefs Brigadier Bob Bruce on the local security situation at Patrol Base 4, in Helmand's Nad 'Ali district, ahead of the base's handover to Afghan National Security Forces (library image) [Picture: Corporal Jamie Peters, Crown copyright][h=3]Smooth transition[/h]So, with the performance of the ANSF going well, the Brigadier said that the time was right during Herrick 17 to develop the process of redeploying troops and equipment to the UK home base.

I took over on 10 October [2012] and the Task Force occupied 37 bases, said Brigadier Bruce. When I handed over last Wednesday, it occupied 12. In 6 months we either closed or handed over to the ANSF 25 bases. Many people predicted that this would be a messy affair that we would close or transfer these bases under pressure from the insurgents. Actually nothing could have been further from the truth. We didnt have to delay a single base closure or transfer by as much as 5 minutes in response to anything the insurgents had to offer.
​
This, he said, changed fundamentally the profile in the way that security is provided in central Helmand:

People could leave their compounds and see that they were being protected by their own security forces with international forces in support, and of course the insurgents could also see that was the case.
​ 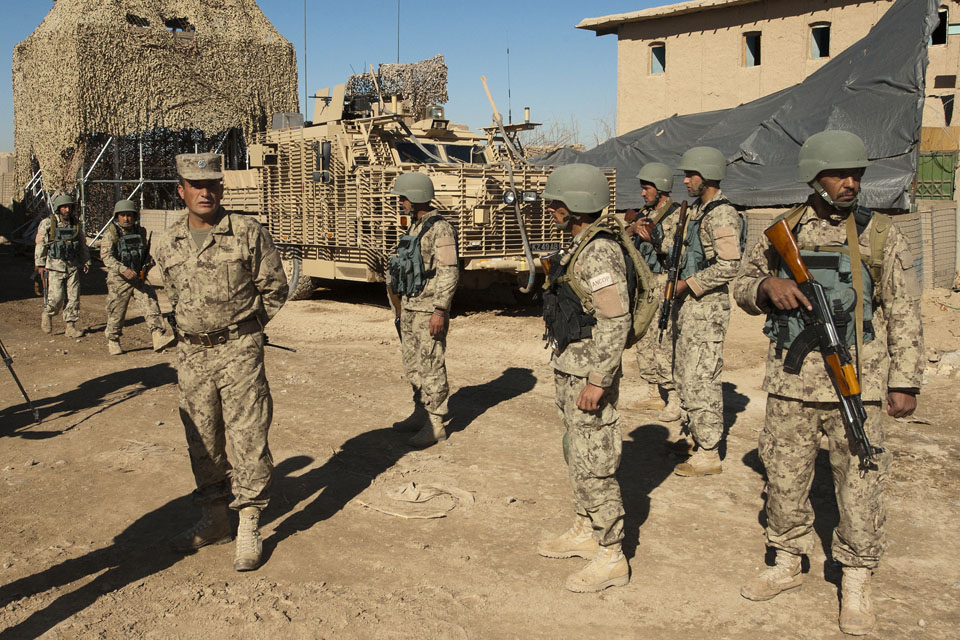 Police men from the Afghan National Civil Order Police at Patrol Base Pan Kalay (library image) [Picture: Corporal Jamie Peters, Crown copyright][h=3]Continuing support[/h]Of course, the ANSF is still a developing institution and in certain areas, such as air casualty evacuation, fire support and target acquisition, they still rely on ISAF capability. Over the next year these capabilities will be built up and equipment will be issued to fill those gaps.
Until the drawdown of ISAF forces at the end of 2014 combat capabilities will be maintained for the ANSF to call on if they need it. 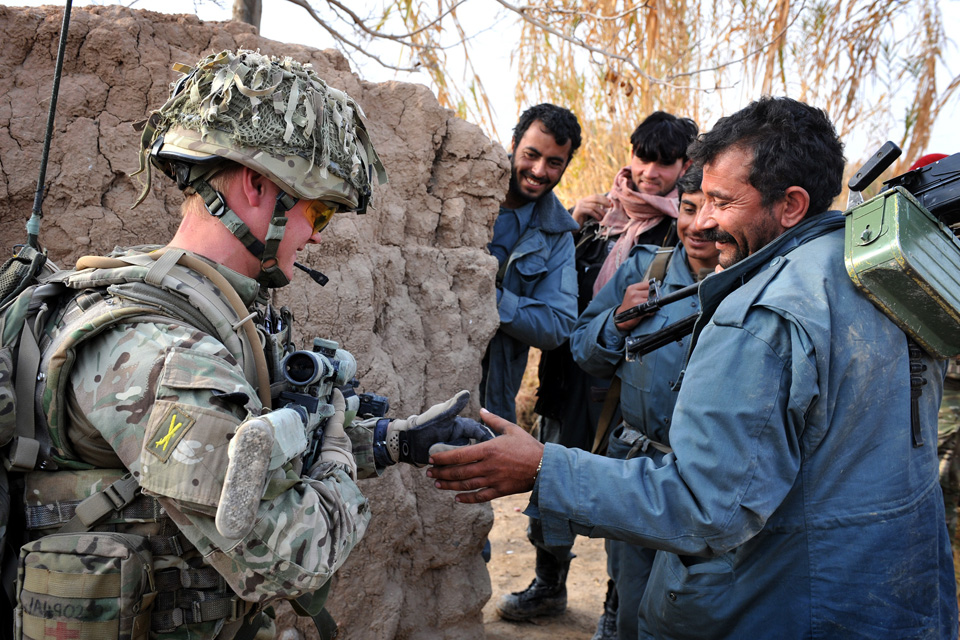 A British soldier shares a joke with members of the Afghan Uniform Police during a patrol (library image) [Picture: Corporal Mike O'Neill, Crown copyright]The Brigadier finished his briefing by paying tribute to the men and women who had served under his command.

For a British commander commanding such a powerful team of professionals was a hugely humbling experience. The professionalism of the British troops and their bravery is astonishing. They can, and at times they have had to, fight like lions. But they can also switch their focus instantaneously and go from fighting to showing tremendous restraint and judgement and compassion. I am hugely proud of them and all that they have achieved.
​