Andy’s time as a reservist has been in addition to a full-time career, beginning as an electronics engineering apprentice before his time in Bosnia prompted the move to the Defence Science and Technology Laboratory (Dstl). In 16 years at Dstl, Andy has worked in a number of areas, beginning with the replacement of the ‘Wheelbarrow’ – a bomb disposal remote control vehicle (RCV), then focusing on electronic countermeasures and IEDs and, most recently, undertaking a Masters in International Security and Strategy while at the Royal College of Defence Studies, with a focus on artificial intelligence.


Dstl’s strength lies in its people and their individual knowledge, skills and experience. As the UK’s leading government agency in applying science and technology to the defence and security of the UK, reservists are able to leverage their military experience to the benefit of Dstl. Quid pro quo, the Regular Armed Forces benefit from Dstl reservists, given their specific defence-related roles.
​
He also conveyed how operational service, both as reservists and as civil servants, highlights what a difference Dstl staff can make on the ground. Equally, as the first reserve officer to command a troop on live bomb disposal tasks, Andy brought back real insight to Dstl for what is needed on the front line in Bosnia, adding:


When I was deployed as a bomb disposal officer, I wasn’t dealing with IEDs (like those deployed in Iraq and Afghanistan). My team and I were dealing with air dropped weapons (large unexploded bombs), unexploded mortars, booby-trapped grenades, rockets that had malfunctioned and thousands of mines, both anti-vehicular and anti-personnel left over from the War. Our biggest threat came from booby-trapped mines.
​ 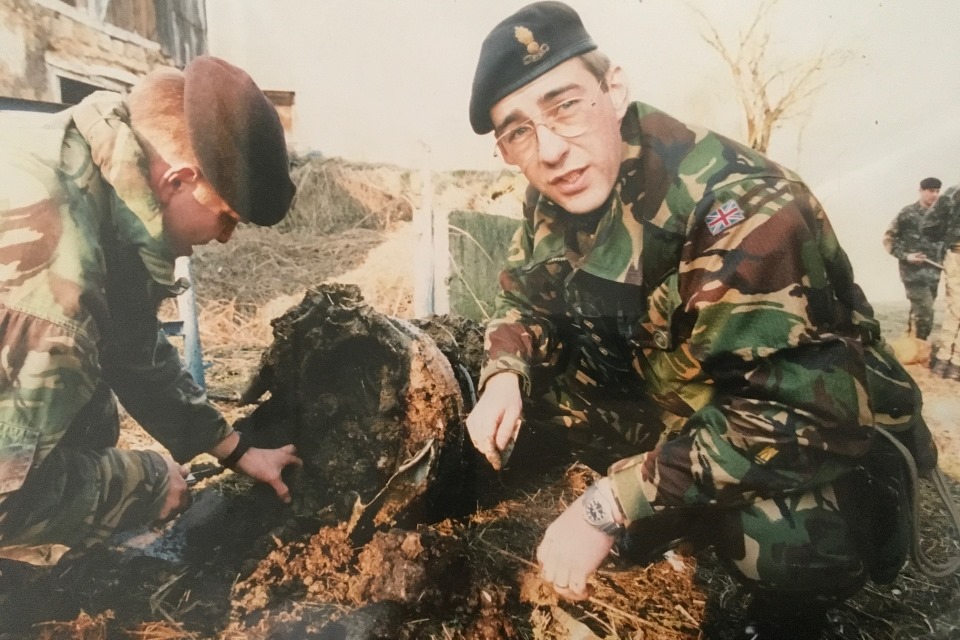 As a reservist, Andy received the same training as his regular counterparts and when commanding troops the same high standards are necessary for safety and mutual trust:


Needless to say the sense of ‘belonging’ and team work in the Army is very strong, and arguably more so within explosive ordnance disposal.
​
He is still proudly representing the Army Reserve Force and he recently found himself at a 10 Downing Street breakfast reception with the Secretary of State for Defence, Gavin Williamson, to mark Reserves Day. After an impressive 36 years as a reservist, Andy takes up a new role next year as Deputy Director of Land Warfare Centre in Warminster.

Would they be using his first name in such an overly familiar manner if he was a regular Brigadier instead of a reserve one? I'm only asking in the interests of "one army".
Anyway, well done Andy, thumbs up mate........
Last edited: 23 Aug 2018
CSS, the "cant' do" part of the British Army.........

Andy has worked in a number of areas, beginning with the replacement of the ‘Wheelbarrow’
Click to expand...

Damned with faint praise!
“Can you stop being irritating for the sake of it?”

Piers Morgan to Peter Hitchens, 31 Mar 20
You must log in or register to reply here.