Lance Sergeant Beeby was speaking on the BBC production ‘MP3 War’, one of 3 documentaries hosted by Radio 1’s Greg James. The documentaries look at the importance of music to armed forces personnel now and 100 years ago.

Inside the recently revamped Imperial War Museum, Lance Sergeant Beeby was joined by Lance Corporal Lucy Judd, 29, and Lance Corporal Albert Johnson, 24, who had been invited to discuss their recent tours of Afghanistan.

The three were asked to compare their experiences in Afghanistan with that of soldiers who fought in the First World War, with a particular focus on the music that helped get them through their tours.

While most members of the current armed forces own an MP3 player of some kind, listening to music at the front in 1914 could not have been more different. Music that service personnel 100 years ago heard would often come from a single, wind-up gramophone; a luxury item normally owned only by officers.

Looking at the gramophone on display in the museum, the thought of hauling it around Afghanistan did not particularly appeal to the soldiers.


Imagine lugging that around on patrol!
​
Musical tastes from a century ago were also questioned. The gramophone creaked back into life with the sounds of Peter Dawson’s ‘A Bachelor Gay’, and Lance Corporal Judd, a member of the Band of the Welsh Guards said she preferred Ellie Golding’s ‘Burn’ to Dawson’s tune, most of which she conceded she ‘couldn’t understand’. 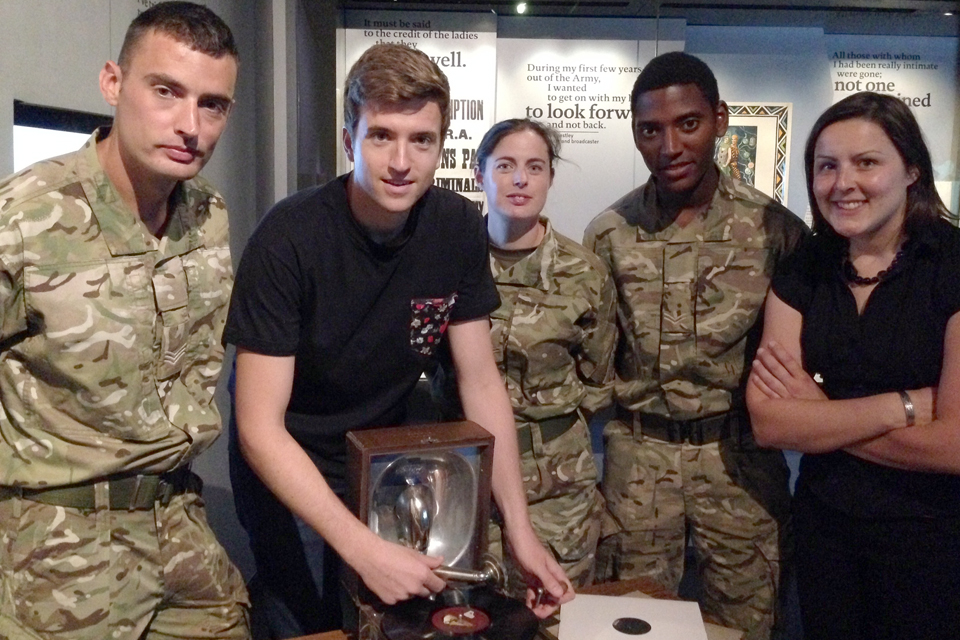 However, what struck a chord with all present was the importance of music for troops both in 1914 and 2014, and there was general agreement that ‘music helps to prepare for war’.

And although Lance Sergeant Beeby admitted that his choice of dance music ‘sometimes made him wish he was in Ibiza’, rather than the harsh desert of Afghanistan, all 3 soldiers agreed that there were many elements of their operational tours that they missed.


I miss a lot of the banter. They [his regular army colleagues] were a great bunch of people.
​
The second part of the show, set in the museum’s trench exhibition, highlighted the scale of the First World War, so strikingly lifelike you could almost smell the mud and gunpowder. Museum curator Laura Clouting reinforced the severity of the conflict with the statistic that ‘one in 2 British soldiers who fought in the war became casualties’.

Host Greg James, who went out to Camp Bastion, headquarters of UK operations in Afghanistan, in 2012, highlighted the parallels between 1914 and 2014. He said:


Young soldiers then and now like to have a kickabout and a sing-song. Little has changed in 100 years, apart from the numbers that made it home.
​
A century on from the outbreak of the war, it is certainly timely to remember the events of 1914 and to continue to support our armed forces in 2014 and beyond.