The new Army Reserve recruitment campaign launches today with a series of recruitment events up and down the country. It aims to showcase to potential reservists, aged 18 - 50, how a role in the Army Reserve can help fill the gaps missing in people’s civilian careers, with the additional benefit of being paid while training (including regular promotions and pay rises), the chance to train and work alongside the Regular Army and the minimum commitment of 19 days a year. 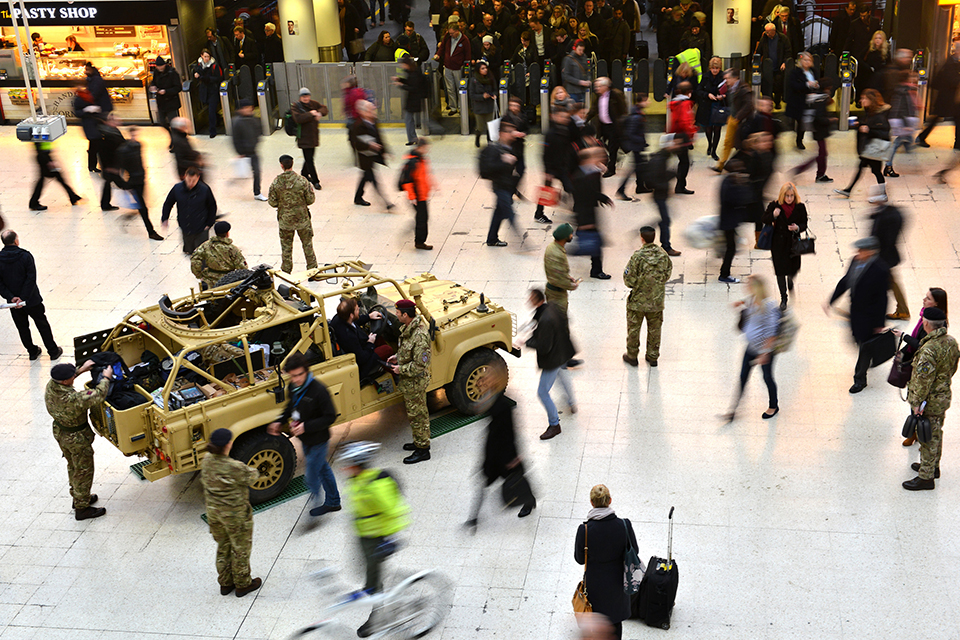 
This research tells us that people feel their jobs are lacking a challenge, excitement, the opportunity to travel and a decent salary – all of which are available at a world-class standard with the Army Reserve.

No matter what your day job, the Army Reserve has something to offer you in your spare time, whether you want to use and improve your existing workplace skills, or try your hand at something completely different. You can travel the world, gain qualifications and benefit from confidence and leadership skills that will help you shine in your civilian career.
​ 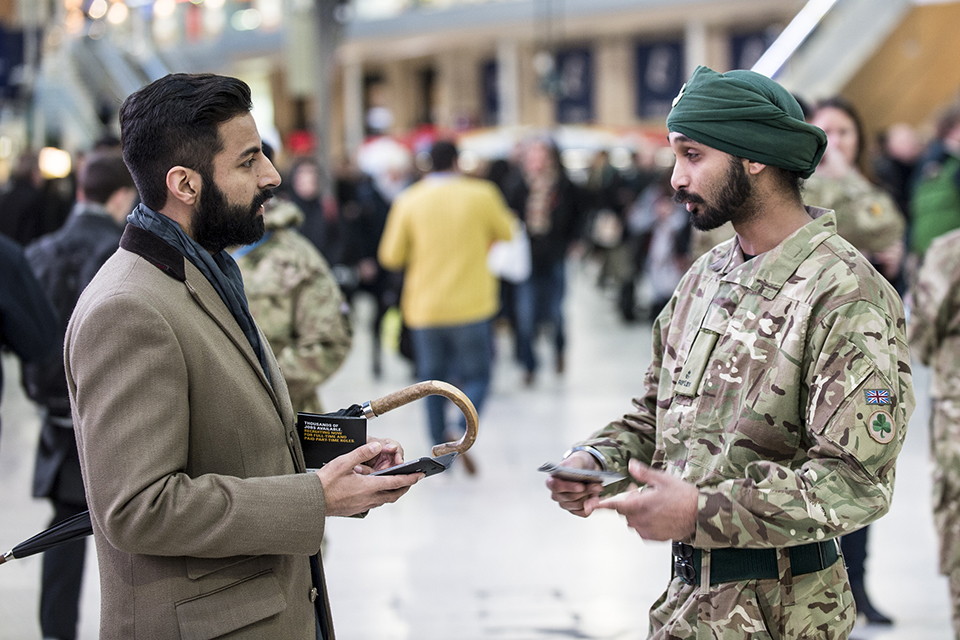 A public information campaign to highlight the role of the Army Reserve within the new Army structure supports the recruiting campaign, launching on Saturday 17 January. The ‘Normal Day’ campaign aims to demonstrate the importance of the roles the Army plays, at home and abroad, in a modern world undergoing significant regional and social change. The campaign launches as the latest independent research reveals a lack of recognition for the full breadth of roles the Army undertakes, and indicates that 1 in 5 Britons believe it is less relevant now than ever before. 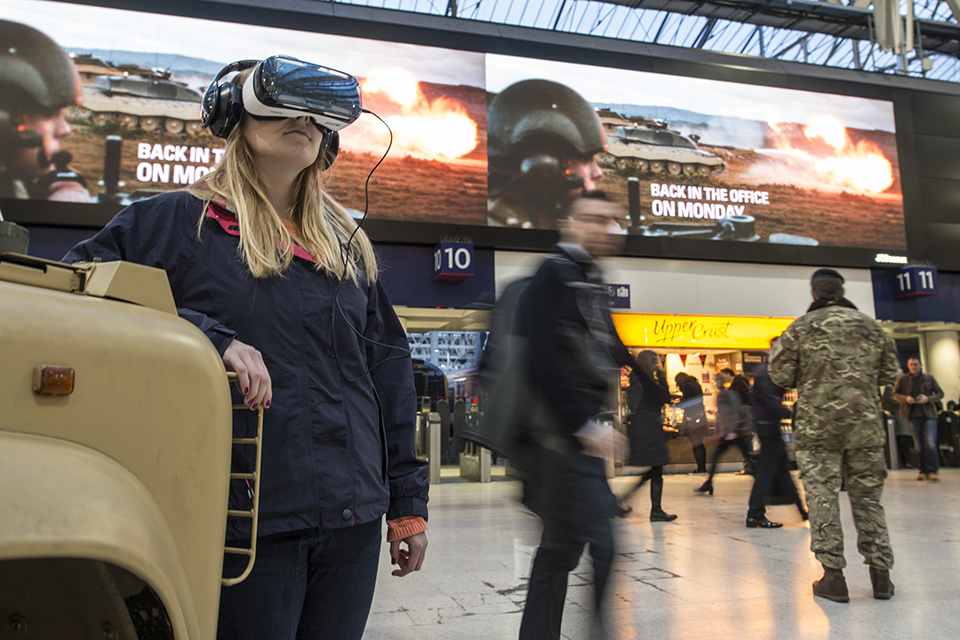 A member of the public tries out a virtual reality headset to get a taste of what life is like on an Army exercise [Picture: Sergeant Rupert Frere RLC, Crown copyright].


We have launched this campaign to improve understanding about what the Army does, but also to showcase the people that make our Army the force it is for good. These skilled men and women help to ensure normality is preserved for people at home and overseas and this campaign helps bring that to life for a modern audience who, in part at least, may question its future role and relevance.

We are proud of the Army’s values and role which is absolutely to protect the United Kingdom and fight its enemies, but also to prevent conflict and deal with disaster. While we recognise the clear need to adapt and change with the times, our role and relevance is enduring. The Army is as relevant now, if not more so, than ever before amid these incredibly complex times.

The campaign breaks new ground for the Army and vividly brings to life the many, and often under-recognised, duties it performs across a number of different communities and scenarios.
​
Continue reading...
This is an automated feed from the Ministry of Defence website

A virtual reality headset display of a woodblock?

Book Reviewer
And next week:

Followed by:
Army looks to recruit experienced Jihad veterans.
'General Arbuthnot Anabolic-Steroid said, we recognise that with their combat experience we can reduce costs at training level, and perhaps learn where we have been going wrong in the past! 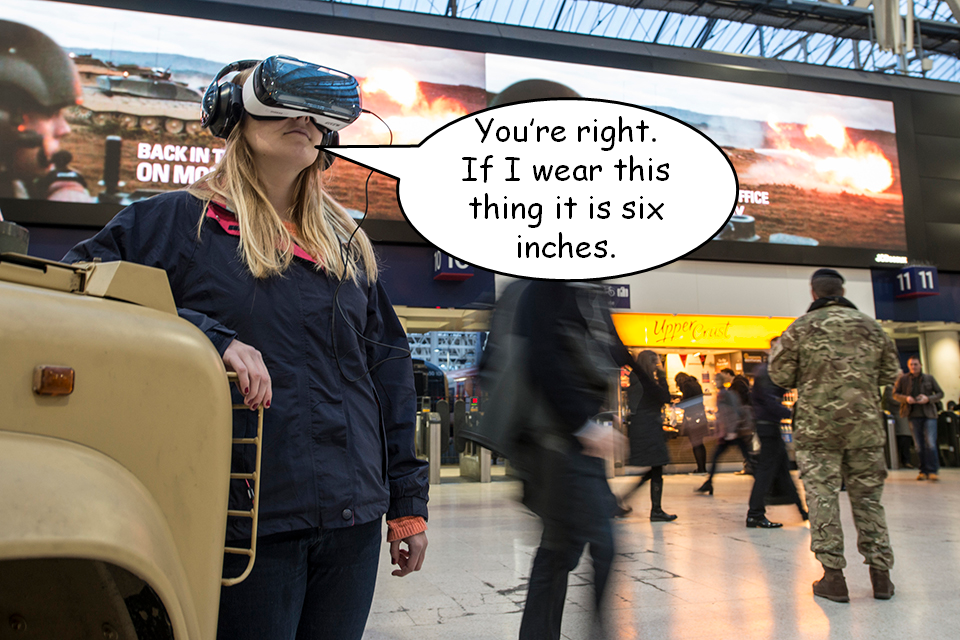 ‘Men sail a boundless and bottomless sea. There is neither harbour for shelter nor floor for anchorage, neither starting-place nor appointed destination. The enterprise is to keep afloat on an even keel.’ - Michael Oakeshott

Moderator
"And the event generated 100 expressions of interest"

The_Duke said:
"And the event generated 100 expressions of interest"
Click to expand...

Don't knock it. It may be fairly pants, but the cost-to-name-on-paper ratio probably beats anything else attempted so far

At one of the first TANOD, we chose to ignore the guidance to open up one of our TA Centres, and instead packed the lads off to do a similar stand (less the VR kit) at a local shopping centre (because it was a small Platoon TAC, out of the way, and we couldn't do both).

Once the various sign-in sheets came in from around the units to Bde HQ, it turned out that the Platoon's 15 or so credible names was the best result in the Brigade area. The bulk of visitors to the TACs turned out to be families, or ineligible for service (i.e. too old / young / female).
You must log in or register to reply here.