The Deputy Prime Minister Nick Clegg and Secretary of State for Scotland Alistair Carmichael visited F Company, part of the Scots Guards, at Wellington Barracks in London ahead of Armed Forces Day, which will be held in Stirling this weekend. 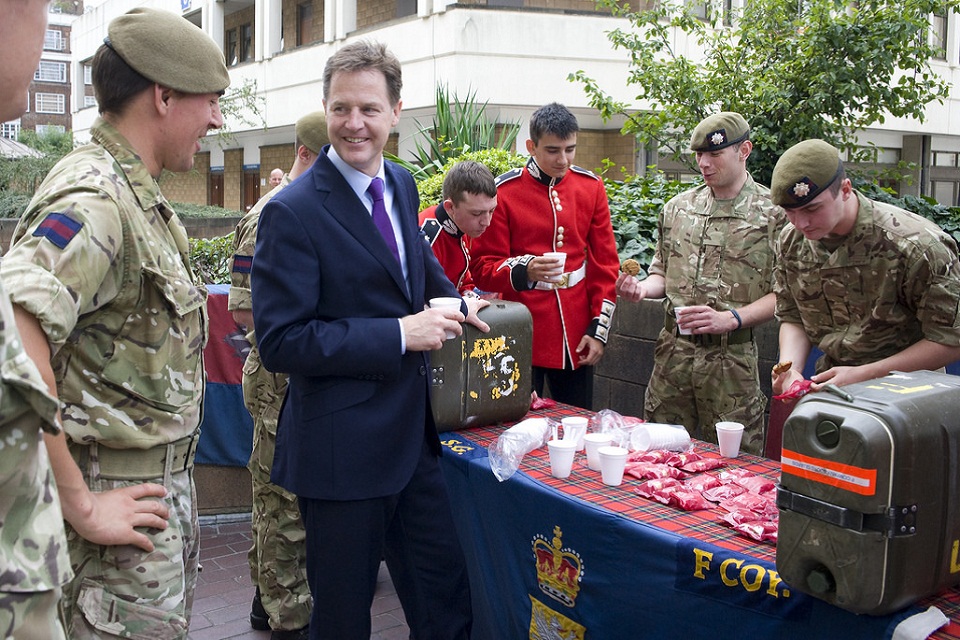 F Company form part of The Queen’s Guard and are the soldiers seen outside Buckingham Palace and Windsor Castle.

The Deputy Prime Minister and Secretary of State for Scotland spent time with Guardsmen, saw a weapons test and enjoyed a cup of tea called a ‘Big Brew’ with 100 soldiers.


View pictures of the visit.


Our brave servicemen and women make huge sacrifices to ensure our safety and liberty every day. It’s not just a job, it’s selfless dedication to protect our country. That’s why Armed Forces Day is so important so that we can give them all our heartfelt thanks.

I was privileged to meet F Company, see their barracks, and hear about their rigorous training. The Guardsmen I spoke to told me just how much the public’s show of support on Armed Forces Day means to them.
​
Find out how people have been supporting Armed Forces Day by flying the flag this week.


The Secretary of State for Scotland Alistair Carmichael said:


On the eve of Armed Forces Day it was a great honour to meet the dedicated Scots Guards at Wellington Barracks and hear first-hand about their experiences of active service. Meeting our active service personnel whether they stationed at Wellington Barracks or Glencorse Barracks near Edinburgh – which I visited recently – or anywhere across the globe is always an honour and a privilege.

Armed Forces Day is fantastic event and I have no doubts that Stirling with its strong military links will be an excellent host. Whether you visit Stirling this Saturday or attend any of the events planned across the UK, Armed Forces Day provides the opportunity for communities to say “thank you” to service personnel, veterans and their families.
​
Company Commander, Major Charlie Turner said:


We are grateful that the Deputy Prime Minister is able to take time out of his busy schedule to visit F Company to mark Armed Forces Day.

Armed Forces Day means a lot to F Company and the Scots Guards as it is possible to see the high level of support there is from the British public.

Since the first Armed Forces Day it has been clear to us in the Army that the public’s show of support and genuine appreciation has increased significantly and this is really humbling.
​
Notes to editors


Continue reading...
This is an automated feed from the Ministry of Defence website

Mirror: "'Beat The Bullies' Hotline Launched In Bid To Stamp Out Abuse In Armed Forces"