On 27 October, UK troops left Helmand marking the historic end of UK combat operations in the province for 13 years.

UK forces have been in Afghanistan since 2001 and the end of 2014 will see the completion of the International Security Assistance Force (ISAF) mission. As the ISAF mission comes to a close, UK forces will now focus on the NATO Resolute Support mission.

Resolute Support will continue to develop the Afghan Ministry of Defence and training the future leaders of the Afghan National Army (ANA) at the Officer Academy. 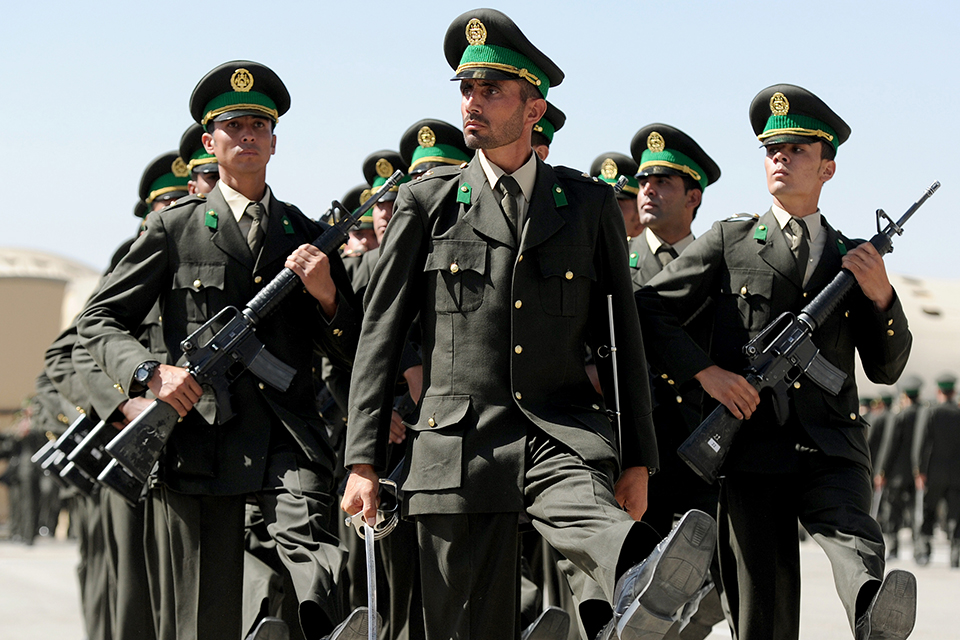 Members of the First Kandak at their graduation parade from ANAOA [Picture: Corporal Chantelle Cooke]

Training and advising the ANA has been in action for a number of years. In 2009, NATO Training Mission for Afghanistan was announced and since then ISAF troops have been providing high-level support to Afghan National Security Force (ANSF) throughout its existence to enable it to be a strong and sustainable security force.

Major Bev Allen, was the Advisory Team Commander in Afghanistan back in 2012.

He has seen the change in how ANA and Afghan National Police handle security in the Nad’Ali district and the positive effect that’s had on the community.


We’ve seen the leaders working together and it’s [Nad’Ali] is now a bustling, thriving commercial centre and the locals are very happy that security has been delivered.
​
My job in Afghanistan


One of the achievements in strengthening the Afghan forces was the creation of the Afghan National Army Officer Academy (ANAOA) in Kabul. The first intake of cadets started in October 2013 and 243 officers graduated in September this year – a landmark moment for the Academy, UK and Afghanistan.

The graduates went through a 42-week leadership course, inspired by the ethos of the Royal Military Academy Sandhurst but tailored to Afghan experience.

Another positive milestone was the first intake of female cadets at the academy in June 2014. With the support of their mentors, the cadets and ANA have been demonstrating that mixed teams of male and female soldiers can work together to improve the army’s operational capabilities.


The success of ANAOA is just one example that Afghans are proving to be confident and capable of taking the lead in providing security and support for their people.

In 2011, Afghan forces took the lead for security in Helmand province with ISAF supporting them on patrols and operations. By June 2013 the ANA assumed the lead for all military and security operations in the country, taking over from ISAF. 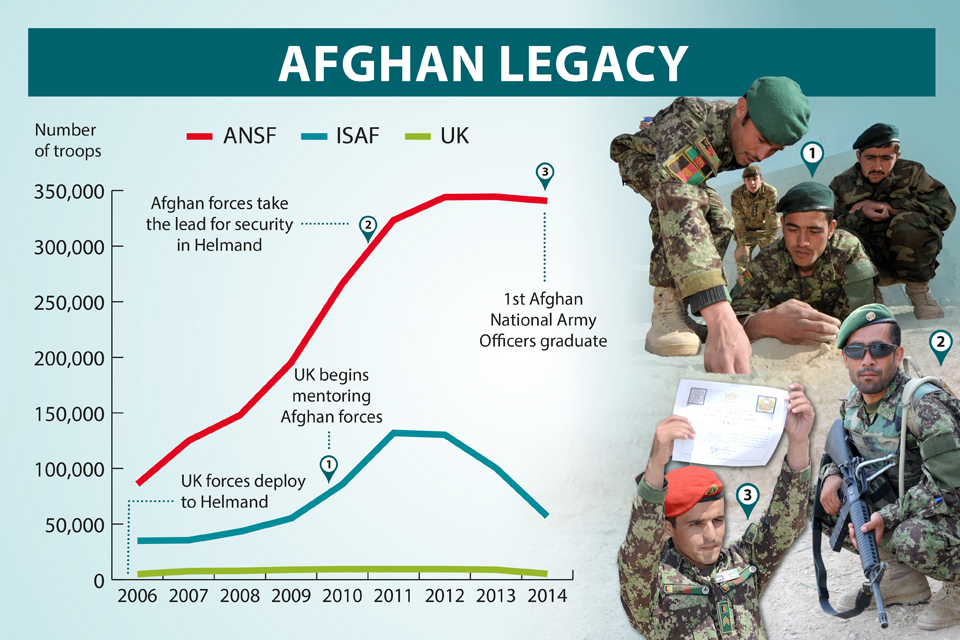 An infographic looking at the number of troops in Afghanistan

The ANSF’s most notable success has been the handling of security during the two rounds of presidential elections this year – for which they had sole responsibility. The reduction of violence in the past 3 years has also demonstrated that it has the capability to look after its own country’s security.


As the ANA continue to show its combat abilities in fighting the insurgents, a few hundred UK specialists and mentors will remain in Afghanistan, in the Kabul region, to help establish process and systems that will allow the Afghan government to effectively deliver national security in a self-sustainable manner.

The overall aim is for UK advisors to develop the capability and professionalism of the security ministries in Afghanistan so it can effectively manage its securities forces and increase stability. In turn, this will enable the Afghan government to develop a better economy, education and life for its people.

Why does that show UK start mentoring forces in 2010, what were the OMLT teams doing?
NULL

the_mars_bar_kid said:
Why does that show UK start mentoring forces in 2010, what were the OMLT teams doing?
Click to expand...

Good point. Seeing as they were the Main Effort back on H7 ie 2007 the graphic seems bollox.
loopintheP

Eggs as in heads

A bollox graphic from the MoD press office? Never!

The whole shithole of a country will completely implode within 12 months.

You won't need a coat if you crack any more jokes like that's. It was eggsactly funny.
You may not believe in God or a God, but trust me, when you’re really in the shit you will pray to everyone.

Why are they goose stepping in that photo?
I wear dark glasses so the coppers cant see my brain - Ian Brady, Child Murderer

loopintheP said:
Good point. Seeing as they were the Main Effort back on H7 ie 2007 the graphic seems bollox.
Click to expand...

Are they showing the point when afghans started taking the lead on ops? I'm guessing.


Posted from the ARRSE Mobile app (iOS or Android)
"I think i am becoming a god."
Vespasian
D

ACAB said:
Why are they goose stepping in that photo?
Click to expand...

I'd goose step on parade if I had 3 weeks left to live. Why not?

Plans to bring vulnerable Afghan interpreters to the UK accelerated