The contract for Active Electronically Scanned Array (AESA) radar capability was awarded to Eurofighter Jadgflugzeug GmbH by NETMA – the NATO Eurofighter and Tornado Management Agency – on behalf of the UK, Germany, Spain and Italy.

The radar will further improve the Eurofighter Typhoon’s combat effectiveness.

Alongside recent announcements for weapon capability upgrades, the contract demonstrates the commitment from the countries involved in the Eurofighter Typhoon project, a world class multi role combat aircraft. 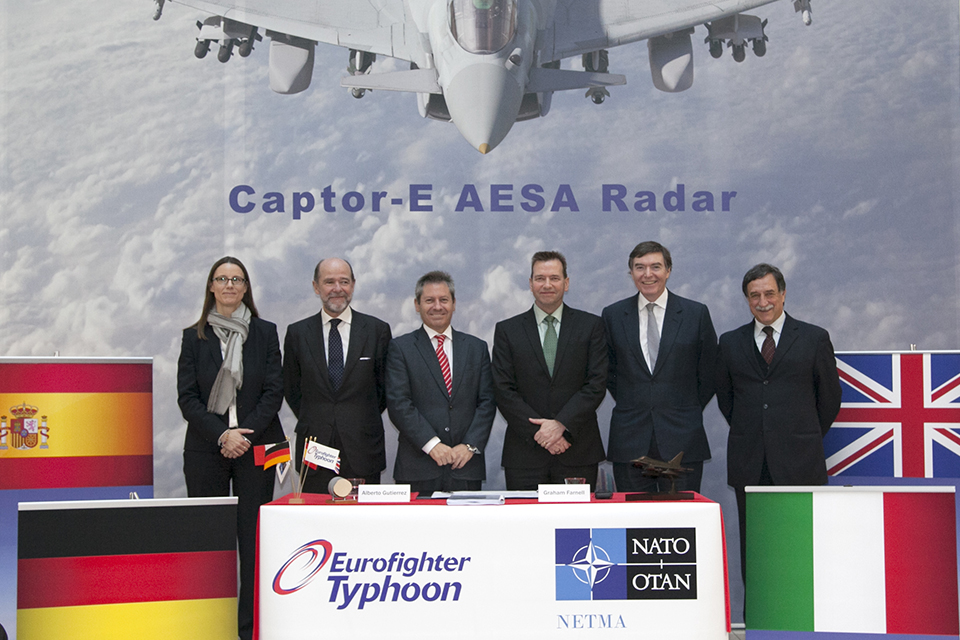 
This contract marks a major milestone in the development of the Typhoon programme and offers a significant increase in the capability of the aircraft.

The development of this AESA radar is a significant step in delivering technology that will ensure the Royal Air Force is equipped to meet the evolving demands of operations.

Following recent announcements on weapon capability enhancements, notably the integration of Storm Shadow, this contract is a further demonstration of our continued commitment to the Typhoon aircraft.

The contract also represents another significant investment in the defence industry in Scotland, sustaining around 500 jobs at Selex ES in Edinburgh.
​
The introduction of an AESA radar is designed to give the Eurofighter greater vision than its competitors through simultaneous multirole air-to-air and air-to-ground tracking of targets with increased fidelity and range.

The contract marks the culmination of considerable investment by the partner nations and industry in developing the technology required to provide Eurofighter-Typhoon with cutting edge sensor capability.

Will the Germans be gutted at spending that money... given theirs don't fly?
Life member of school for fools.

So we ordered it without a "cutting edge" RADAR?
It's time for British Independence.

Kit Reviewer
Book Reviewer
I thought we had already ponied up for this, does this mean we managed to get the others to open their wallets?
Arrse's very own bartender imparting wisdom, wit and all things boozey.

Yes and no. When the first ones flew the radar was perhaps cutting edge, however 25+ years later it is ancient technology. Progress is wunnerfull innit?
Power is in tearing human minds to pieces and putting them together again in new shapes of your own choosing.

Drlligaf said:
Yes and no. When the first ones flew the radar was perhaps cutting edge, however 25+ years later it is ancient technology. Progress is wunnerfull innit?
Click to expand...

It's not as if it was even close to entering service 25 years ago. The first prototype flew 20 years ago and the fighter version only entered service 8 years ago. It shouldn't really need a new RADAR yet.
It's time for British Independence.

The radar it has now is excellent. However it is optimised for A2A. This development will help improve its A2G capability.


Posted from the ARRSE Mobile app (iOS or Android)
"Darling?Thats a bit of a girls name isn't it? The last person I called Darling was pregnant 20 seconds later!"

With this next generation radar perhaps some potential export partners will give it more of a look.
Life member of school for fools.