CutLunchCommando said:
You mean the Rosetta/Philae probe? Thast was ESA I think. NASA cancelled their lander but had the Deep Impact probe Deep Impact (spacecraft) - Wikipedia
Click to expand...

Yes ESA, that's the one, I stand corrected, thank you.

I have a question - that previous elongated flat rock object that came into our solar system a couple of months ago, why don't they plant a spacecraft like U.T. (see what I did there!) on one of those objects and allow it to ride it around its orbit? Or stick something on the moon to monitor the earth ?

The Apollo 11 astronauts returned from the moon 40 years ago today, but they left behind more than footprints. An experiment they placed on the moon?s surface is still running to this day.

The Lunar Laser Ranging Experiment is the only moon investigation to continuously operate since the Apollo 11 mission. The experiment studies the Earth-Moon system and beams the data to labs around the world, including NASA's Jet Propulsion Laboratory (JPL) in Pasadena, Calif.

"Yes, we are still going," said James Williams, a JPL scientist involved with the experiment, in an e-mail interview.

Data from the ranging experiment has been used to learn ? among other things ? that the moon has a fluid core and is moving away from the Earth, and that Einstein's Theory of Relativity is accurate.

The instrument itself, called a lunar laser ranging reflector, was originally intended to accurately calculate the distance between the Earth and moon by measuring the round-trip time of a laser fired from Earth to a reflector on the instrument.

The average distance from the centers of the Earth and the moon was calculated to be 238,897 miles (384,467 km). NASA scientists say the measurement is one of the most precise distance measurements ever made and is equivalent to determining the distance between Los Angeles and New York to one-hundredth of an inch.

The accuracies will continue to improve as observatories on Earth improve their technology.

"Technical improvements at the observatories rejuvenate the lunar laser ranging effort," Williams said in 2004, when the experiment turned 35. Williams is one of four JPL scientists that analyze the data from the Lunar Laser Ranging Experiment. "When the range accuracy improves, it is like getting a new experiment on the Moon."

The instrument itself does not require any power to operate on the moon (only the lasers on Earth do), so it's likely to be in service for many years to come. Scientists at the University of California, San Diego and the University of Washington are working with a new lunar ranging instrument that has significantly improved accuracy at the Apache Point Observatory in New Mexico.

"The usefulness of continued improvements in range determinations for further advancing our understanding of the Earth-moon system will keep the lunar reflectors in service for years to come," Williams said.

Spank-it said:
a battery recharge in between each one
Click to expand...

At that range the only reliable electrical energy source is an RTG*, they have the disadvantage of slowly losing power over a period of time.

According to NASA, the first close-up images of distant world Ultima Thule reveal it resembles reddish snowman. The image taken by @NASANewHorizons – shown in its original version (left) & sharpened version (on right) – is the most detailed image of the farthest object ever explored by a spacecraft. (Image source: John Hopkins Applied Physics Laboratory (APL) Twitter account) (My Paintshop Edit on the Red). 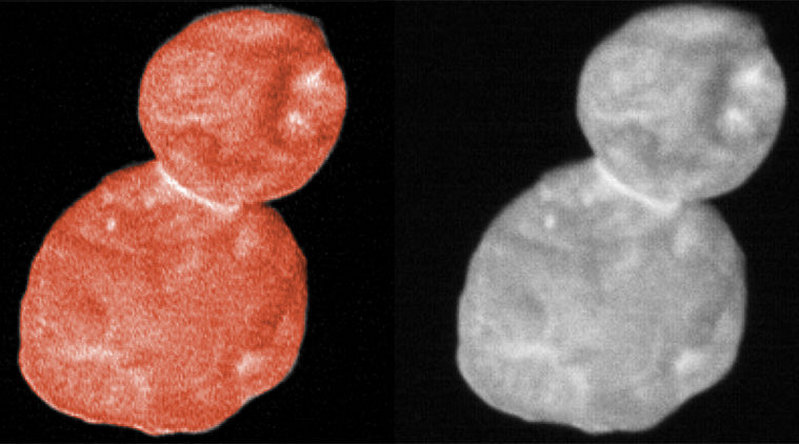 The difference in resolution between the two shots is quite remarkable.

In this animated GIF of Kuiper Belt object Ultima Thule made from two images taken 38 minutes apart, the "Thule" lobe is closest to the New Horizons spacecraft. As Ultima Thule is seen to rotate, hints of the topography can be perceived. The images were taken by the Long-Range Reconnaissance Imager (LORRI) at 4:23 and 5:01 Universal Time on January 1, 2019 from respective ranges of 38,000 miles (61,000 kilometers) and 17,000 miles (28,000 kilometers), with respective original scales of 1017 feet (310 meters) and 459 feet (140 meters) per pixel.
Click to expand...

EDIT The bright band at the neck is quite interesting. Is there fresh material reaching the surface there due to interaction between the two parts? Interesting as well that they were so round in the first place.
I wants to finish my little bit and I wants to get home for my tea.

This is beginning to bother me. Have they missed?
I wants to finish my little bit and I wants to get home for my tea.