National Education Union, the XLW, Pimlico Academy and the way our schools are going

Pimlico Academy hits the news again today with graffiti emerging with the generic accusations of "racism" with, of course, nothing specific enough that it can actually ever be investigated or determined. 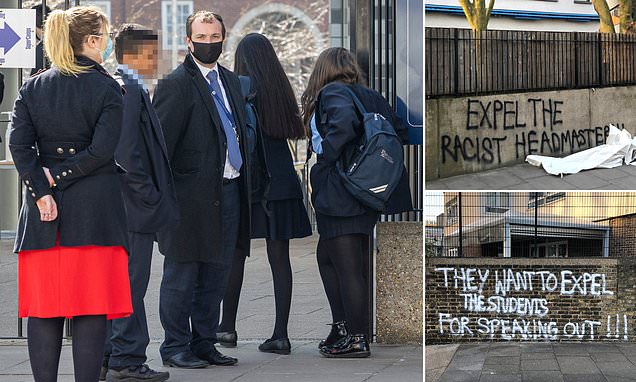 Pupils at Pimlico Academy in Westminster walked out of class and during a protest over changes to the school curriculum, the flying of the national flag outside the building and a uniform policy.

The bit that this story misses (well, it's the Mail so you can't expect too much intellectual vigour) is the way in which the kids are being whipped up by protagonists in the National Education Union, supported by the Socialist Workers Party (you see their banners on most of the pictures of the kids walking out). The union are taking their cues straight from the XLW play book in places like Portland right now.

I'd suggest taking 5 mins to read this article from the Washington Examiner about the XLW take-over of a small liberal arts college (in that sense a "liberal" arts college in the US is one where you do a degree in 4 years covering a variety of subjects mostly raging from literature and social sciences as opposed to a "university" college that also has faculties of science, medicine, engineering, and architecture) on the west coast. If you put the events side by side you get to see just how much extreme left-wing politics is influencing the way the protests at Pimlico are being stage managed by the NEU.

www.washingtonexaminer.com
(follow the red link to the story: Bonfire of the academies: Two professors on how leftist intolerance is killing higher education)

Pimlico Academy is the vital ground here. The NEU (and the headbangers that run it) are conducting a huge social experiment here: win, and depose the Headteacher and Governors, and this is what you will see take place in more and more schools across the country.
Former Int Cell, RLC, and OTC/ACF Forums Moderator (Until the banality started to hurt)

For me teaching unions need to be very careful where they start to go with this and other things.
They seem to want to continually push back and rabble rouse particularity against anything the Government suggest such as extra teaching during the holidays.

Thing is a of of pupils have had a period of home schooling.
My daughter who is 14 loved it no one in the class was messing about and disrupted the lessons.
They had set work and a time period to log on and complete it, return it for marking.
Even art and cookery were done remotely with art work scanned in and pictures of her cooking submitted.
It's only a matter of time before one of the big tech companies comes up with a home schooling program and the Government develop it for schools

I'm sure it's cheaper to bung every kid a computer and printer / scanner than it is to run schools.

EXCLUSIVE: Carpeted: Dozens of cadets at Sandhurst broke coronavirus rules in a drunken party at the prestigious military academy
19 20 21

The "All Things Renaissance Polyphony and Chant" thread
2