Philip Jowett, the author of this fascinating miscellany of substantially well-captioned photographs, interspersed with a modicum of helpful explanatory text, will doubtless by quite familiar to many members, observing that he, together with Stephen Andrew, has co-authored at least 18 books in the Men-at-Arms series, describing as they do in great detail the history, organisation and the uniforms and equipment of many armies. Having also written many books on his own about military history for more than 25 years, with a particular interest in conflicts in China, Japan, and Burma, but has turned his attention in this book closer to home and succeeded in highlighting many aspects of what is essentially the Norwegian campaign. 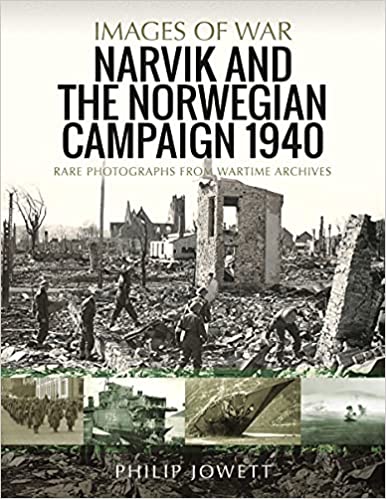 Occurring as it did during what was often regarded as the “Phoney War” on the Western Front, history indicates that the Germans were quicker than the Allies, specifically Britain and France, to decide that the significance of Narvik in northern Norway merited an early invasion, as the main ice-free port for the export of Swedish iron ore, coming from mines some 100 miles to the east and located only 25 miles from the Swedish border. The invasion of both Denmark and Norway started on 9 April 1940, the former being over within hours with little or no resistance, the latter taking two months longer with considerable resistance.

Although unable to offer any real resistance to their Germans, who invaded almost as a virtual passing place en route to Norway, the Danes were both angry and embarrassed at the speed with which the German occupation occurred, as indicated by the very telling comment was attributed to a German officer who had been previously been involved in the invasions of Czechoslovakia and Poland. He reflected, “Prague they spat at us, in Poland they shot at us, but in Denmark they looked at us as if we were a circus act!” One wonders what he would have made of the subsequent spirited resistance of the Norwegians, stand fast the supporters of Vidkun Quisling, or even, jumping ahead to the present day, the Ukrainians standing up to Russia.

Many readers will be familiar with the first and second battles of Narvik which, although Narvik itself was ultimately lost to the Germans, as the fall of France dictated a British withdrawal. However, the accumulated loss of no fewer than ten German destroyers effectively put paid to the Kriegsmarine offering any major surface resistance to the Royal Navy’s predominance for the rest of the war, other than that offered by the major German war vessels which were one by one cornered and sunk or otherwise put out of action. The Royal Navy’s losses cannot of course be underestimated, especially that of HMS HOOD, and HMS GLORIOUS and her attendant destroyers, HM Ships ACASTA and ARDENT, the last two being sunk with the loss of all but two of crews totalling 337 men.

Bearing in mind that the black and white photographs are over 80 years old, they are mostly of extraordinary quality, and provide an excellent feel for the highs and lows of the campaign, a fundamental necessity for the success of the book. Some, especially those portraying occupying German forces, are clearly staged rather than action pictures but, like so many of the latter, have probably never previously been seen by many. The photographs vary enormously as they do from everyday street scenes, through the soldiers, ships, and aircraft used by both sides, to truly evocative live action ones such as the heavily damaged but indomitable HMS GLOWWORM turning to ram the Kriegsmarine’s heavy cruiser ADMIRAL HIPPER, before exploding and sinking on 8 April 1940 with the loss of all but some 30 men of her crew of 150.

Sadly this did not include GLOWWORM’s captain, Lieutenant Commander Gerard Roope, and it is worth recalling that he was awarded the Victoria Cross (VC) posthumously in July 1945, based primarily on the recommendation of the captain of the ADMIRAL HIPPER, received through the Red Cross, in recognition of Roope’s great courage in closing and attempting to sink such a vastly superior warship. Despite its belated recognition, this was in effect the very first action of the war to merit the award of the VC.

As has also been highlighted in other book reviews, the only real criticism of what is after all principally a book of photographs is that, whilst in most cases a clear description is provided of what they are depicting, all too often the only source quoted is simply “Author’s Collection”, which is frankly something of a disappointment, especially since the front cover expressly states, “Rare Photographs from Wartime Archives”, but without any further elaboration. That said, only one misidentified photograph was noted, referring to German “destroyers” which were actually the large torpedo boats operated by the Kriegsmarine.

With the perfect vision of hindsight, and appreciating that Britain and her allies were fully committed on so many fronts, it is interesting to conjecture that, if only there had been a greater appreciation of the significance of Narvik as the prime ice-free port for the export of Sweden’s vital iron ore, and Britain had been able to react earlier and more actively, and linked up much more effectively with the Norwegians, this phase of the war might have been very different.

Additionally, the book serves effectively to demonstrate to readers what a spirited resistance Norwegians put up to German occupation, both in 1940 and in their subsequent continuous resistance. This although the occupation created substantial problems for Allied forces, particularly Arctic convoys throughout the war, and led to the great losses of naval and merchant ships and their valiant crews. It is therefore well worth remembering that the actions of the resistance, coupled with Hitler’s desire to incorporate Norwegians, whom intriguingly he believed to be virtually racially equal to Germans, into the Greater Reich, meant that the up to 400000 troops subsequently stationed in Norway were fortunately rendered unavailable for service against the Allies elsewhere.

Although Hitler offered the Norwegians a ceasefire, this was refused by King Haakon VII, although he ultimately accepted the inevitable, and on 7 June 1940 was evacuated to Britain in HMS GLASGOW. However, in order to encourage continued resistance against the Nazi invaders, in a farewell speech he proclaimed, “Comrades in arms of all nations fighting at the front in northern Norway, remain stubborn in battle and strong in your conviction that the good cause will be victorious in the end.”

As history proudly records, the Norwegians did indeed stay stubborn and strong, and this well-written and very interesting book presents both an illuminating background of the events leading to that resistance, and indeed an interesting parallel to current resistance in Ukraine.

@Union Jack - Thank-you for your review,

Is there any mention of (or pictures of) the Polish Forces that took part in the campaign?
Ditto the French Foreign Legion's 13 DBLE?

Also, is it mentioned that the Allied Task Force was originally assembled to assist the Finns in their Winter War against the Muscovite aggressor?
“The most dangerous worldview is the worldview of those who have not viewed the world.” — Alexander von Humboldt
“A great many people think they are thinking, when they are merely rearranging their prejudices.” — William James

Is there any mention of (or pictures of) the Polish Forces that took part in the campaign?
Ditto the French Foreign Legion's 13 DBLE?

Also, is it mentioned that the Allied Task Force was originally assembled to assist the Finns in their Winter War against the Muscovite aggressor?
Click to expand...

Many thanks for your kind interest and, since there are indeed many relevant photographs and references to both French and Polish involvement in the Norwegian Campaign, and a fleeting one to the "Winter War", I have responded at length by means of a PM, which I trust you will find covers your request.