The USMC have been in the process of exploring their own multi-faceted advanced drone efforts as part of the Marine Air Ground Task Force Unmanned Aircraft System Expeditionary program, or MUX.

Among other priorities the aims of the program are to create a network of early warning, intelligent surveillance, and reconnaissance drones for their Amphibious Ready Group and Marine Air/Gound Task Force, that would be ship borne and operational at sea. 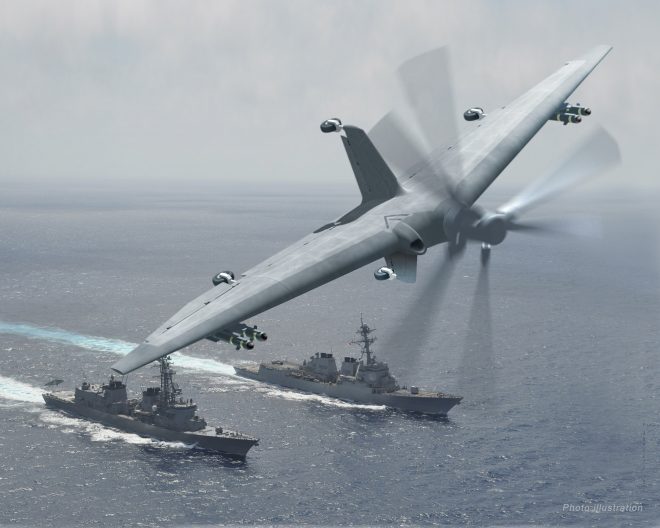 The Marines are evaluating what they want a proposed large unmanned vehicle to accomplish, but know they want to issue an airframe RFI in FY 2020.

Up till recently the comparative lack of institutional knowledge of drone operations may have resulted in the Corps funding requests to be scaled down but their future plans for MUX are still very much part of their intended strategic development.

US Naval Air Systems Command (NAVAIR) is taking a crowdsourcing approach towards decisions as to what unmanned air vehicle (UAV) and components to acquire for this program and a series of competitions were initiated earlier this year and put to interested companies. They would put forward their ideas of the best technology for various requirements.

The first challenge was for a modular mission system payload adaptor, or standard container, holding a MUX mission payload. This would facilitate the rapid loading and unloading into an airframe using minimum tools and support equipment.

The 6 initial challenges would consist of 4 for individual payloads, 1 for payload adaptor and 1 for system architecture. One present contender for the MUX vehicle is the Bell V-247 Vigilant Tiltrotor concept based upon the V-280 Valor.

US Naval Air Systems Command (NAVAIR) is taking a novel crowdsourcing approach to deciding what unmanned air vehicle (UAV) and components to acquire for the US Marine Corps MUX programme.

www.flightglobal.com
You must log in or register to reply here.