Mountain Commandos at War in the Falklands

This is a decent account of the Royal Marines Arctic Warfare Cadre during the 1982 conflict by their CO at the time, Capt Rod Boswell.

Having given a good overview of the Mountain Leaders involved and their training methods and tactics, it goes on to describe their setting out on the first ship to leave the UK to retake the islands and the subsequent journey.

Covering the experiences of the Cadre pre-landing in San Carlos Water and during the invasion, there are many finely detailed and insightful accounts that are often missed in other publications on this subject, resulting in a very interesting read. Included are the attempts of the Cadre to cross to West Falkland under almost impossible sea and weather conditions. 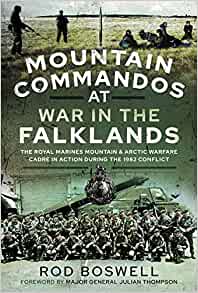 Then the big move of UK Forces to the east is detailed - including the reconnaissance role of the Cadre on behalf of the larger regiments - and their own highly successful battle to take Top Malo House thus opening the way forward for the forthcoming major battles to retake the Islands.

I was disappointed at this point to find the complete lack of decent maps to accompany the fine text. Merely listing the mountains on an otherwise blank page is not enough in my opinion and some good maps showing contours, rock runs, enemy positions, troop movements, directions of attack etc etc would have turned an otherwise good book into an excellent one.

However, and moving on, the final battles and the push into Stanley are well covered with some very worthwhile coverage of the days after the surrender of the enemy - an aspect that is sometimes missed in other books. Similarly, there is a good account of the journey home, the period of post operational leave and the subsequent regrouping of the Cadre.

In conclusion, a good book and a worthwhile read - just a shame about the lack of good maps!