I undertook a search for this and couldn't find an entry, and despite her parting some time back I always worry that duplication of a subject will earn me a virtual tongue lashing from Sluggy - even if it does come from the eternal realm of the ARRSE spirit world....

I came across this on Twatter, which purports to be an invoice from the MOD to the Home Office over the costs of the SAS 'attending' the Iranian embassy siege.

In short, the MOD are asking for the rather specific sum of £14787.02 to be remitted for services rendered. The Home Office try to bat it away by saying it's part of their role. Who knows how it turned out and did that include VAT?

One of things that strikes me is firstly the number of grammatical & spelling errors in the memo - My literacy isn't perfect, but then I'm not scribbling down the thoughts of a Whitehall mandarin.

Secondly, even for 1980, the sum of just under £15k seems rather good value to me to get 35 soldiers to drop everything and hot-foot it up to London. Assuming an inflation rate of 4% pa in todays money it would be less than £77k.

I wonder what it represented. I think the lesson here is to always provide an itemised bill.

The memo is a little hard to decipher, but I think it's as follows -

"Aldis in your division wrote to John Glaze here on the 18th of June closing an invoice to the Home Office for £14,797.02 to cover the provision of military assistance at the Iranian embassy. I am replying as we were surprised to receive this bill.

I think you will find that is always been accepted that the role of the SAS, in resolving, by force, a terrorist incident, has been conceived as properly a military operation which the police are specifically not equipped to undertake, nor should be.

It is not as if SAS assistance is substituting or complementing the same police activity . Nor as in providing military aid to civil authorities, by substituting military staff for government staff who are not otherwise available to carry out their job.

In short it has always been intended that the SAS should be tasked to undertake this function as part of their military role, and in these circumstances a claim for reimbursement would not be appropriate.

Of the various costs which arose from the Iranian Embassy siege , we are taking the view that the cost of the police operation should properly fall to the Metropolitan Police; the costs of the military commitment to the Ministry of Defence; and the Handling of claims for compensation in relation to damage to the diplomatic premises to the Foreign and Commonwealth Office.

I am copying this letter to Brian Cousins in D36, David Miers, MED, FCO and to Dennis Peach our Principal Finance Officer." 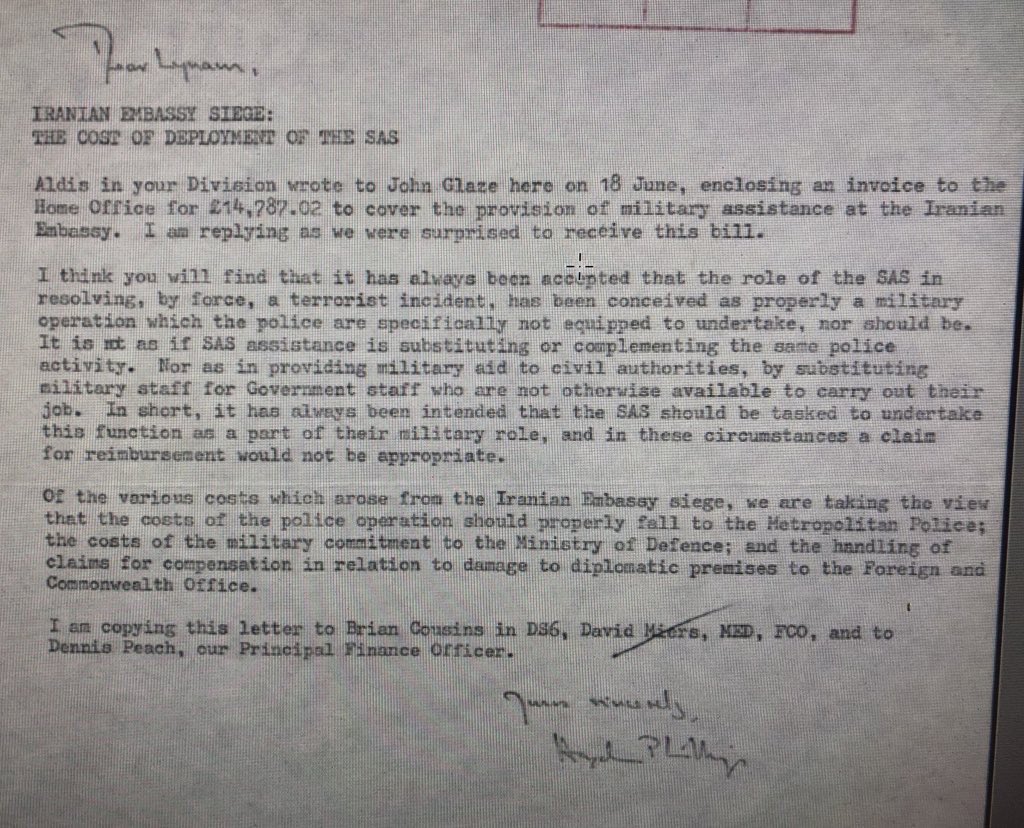 At last count there were over a 100,000 on that balcony.
You may not believe in God or a God, but trust me, when you’re really in the shit you will pray to everyone.

100,000 plus me.
'Pay peanuts get monkeys'
'Quality costs, you get what you pay for'
Professional footballers and bankers show these statements as tosh.

Well someone had to knock out the egg banjos - a proper supporting role...
Targets will fall, scream, wriggle and bleed when hit.

Nothing happened the day in question it was fake.....SAS don't exist

There are MOUs between govt departments which cover who pays for what in the event of a MACA activation. I suspect the £15k, quite a small amount even accounting for inflation, will be to cover costs outside of the MOU, or specific actual costs accrued as per the MOU.
Aut Viam Inveniam Aut Faciam - Hannibal, 200 BC

I wouldn't be suprised if Jeremy Corbyn did actually say that.

It was probably the after event partying and accommodation costs.
"To them, the bike is just garage clutter. To us, it's a loaded Beretta, a half-million in cash, and a forged passport under the floorboards." - Dan Walsh.
P

Effendi said:
It was probably the after event partying and accommodation costs.
Click to expand...

The bill was probably so high because Dennis tagged along. The man quaffed a bottle of vodka, stood up and walked away in a straight line whilst his drinking partner had a problem making it to his official car. The consensus of opinion was that Dennis had hollow legs.
Last edited: 14 Feb 2021
"To them, the bike is just garage clutter. To us, it's a loaded Beretta, a half-million in cash, and a forged passport under the floorboards." - Dan Walsh.
M

Didn't the UK government pay compensation to Iran for the damage done to their embassy as a result of the siege?

Mike Barton said:
Didn't the UK government pay compensation to Iran for the damage done to their embassy as a result of the siege?
Click to expand...

Not as I recall

The Iranians demanded the UK pay for repairs -

As i recall they called it quits when we reopened the embassy in Iran and offerred to pay for damage to theirs if they paid for the damage to ours.

MrMemory said:
One of things that strikes me is firstly the number of grammatical & spelling errors in the memo - My literacy isn't perfect, but then I'm not scribbling down the thoughts of a Whitehall mandarin.
Click to expand...

Bear in mind, this is the age of the typewriter and the typing pool. The Civil Service used to be quite tolerant of minor errors, because the alternative would be to send it back to be retyped, which would take time. If it was going to a Minister, or out, to a Parliamentarian or member of the public, it would be appropriate to make manuscript amendments; this showed that you had bothered to proof read it and had sufficient pride and professionalism to spot and correct errors. You would only send it back to be retyped if there was a whole slew of mistakes, or significant extra language needed to be added in as an afterthought. The ladies of the typing pool could get quite shirty if too much was sent back for insufficient reason, and they had ways of punishing even the most gilded senior...

Note also that the letter is properly addressed to the recipient's surname, not his Christian name!
P

Lindermyer said:
I believe at around this time we also returned the money thay paid for the Shir1
Click to expand...

I think that is still in dispute. About 400 million and they using Nazanin Zaghari-Ratcliffe as a hostage for blackmail.
C

It must have been a difficult one for him given that the ‘enemy’ were enemies of his friends.
A DEAD STATESMAN

Lindermyer said:
Not as I recall

The Iranians demanded the UK pay for repairs -

As i recall they called it quits when we reopened the embassy in Iran and offerred to pay for damage to theirs if they paid for the damage to ours.

I believe at around this time we also returned the money thay paid for the Shir1
Click to expand...

Re returning the money for Shir 1:- Not that I know. As I wrote on another thread, the fellow who had the lead on that case died earlier this year, aged 75.
I had been a few years since I met him but he was still doing a day or 2 a month minding the fort. Unless you know different, because it would be nice to see it put to bed before I retire.
NULL

B
Information on veteran sought.