Book Reviewer
An interesting read, and I now know the history behind the poem that begins:
"The boy stood on the burning deck
Whence all but he had fled;
The flame that lit the battle's wreck
Shone round him o'er the dead"

This book is basically is all about the importance of control of the Mediterranean sea from ancient times to the modern era.
The author also stresses the changes in the way these battles affected ship design and the tactics of naval warfare. 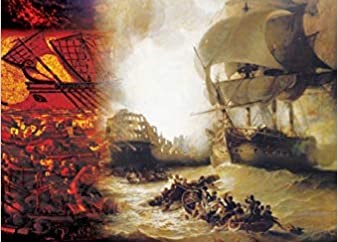 These seven battles altered the balance of power in the Mediterranean theatre and shaped the course of history. Interestingly the battle of Lepanto was the last time fleets of galleys fought against each other and Navarino was the last battle fought entirely between ships under sail.

A good read and if you want to know about the poem you will have to read the book !

Amazon product
Last edited by a moderator: 1 May 2021
A fireman to be successful, must enter buildings; His whole success depends on his getting in and remaining there, and he must always carry his appliances with him, as without them he is of no use. James Braidwood (1800-1861)

The Great Waterloo Controversy , the story of the 52nd Foot at Historys Greatest Battle