Man Trapped by a massive Vagina

Book Reviewer
oh yes tis true, but of course its in Germany the pervs !!
It was a photo opportunity that no self-respecting American exchange student hoping to impress his friends back home could pass up.
Unfortunately the unnamed undergraduate ended up way out of his depth as he posed with Tuebingen University’s Chacán-Pi (Making Love) artwork.
He slipped and became hopelessly jammed inside the giant marble carving of the female anatomy.
The combined efforts of 15 onlookers failed to extricate him from the 32-tonne sculpture made out of red Veronese marble created by the Peruvian artist Fernando de la Jara and meant to signify “the gateway to the world”.
Just days after rescuers from across Europe celebrated the successful recovery of an explorer from inside the country’s deepest cave, the German emergency services had a new mission.
After receiving a call to free a “person trapped in stone vulva”, a total of 22 firefighters in five vehicles attended the scene at the university’s institute for microbiology and virology. It must have a been a slow day in Tuebingen.
“Forceps were not required,” the Schwaebiches Tagblatt newspaper reported.
“It’s a boy!” another online website exclaimed.
The student was released by hand “without the application of tools”. No lubrication was necessary, the Tagblatt added.
Boris Palmer, mayor of Tuebingen, admitted that he had struggled to imagine how the accident could have happened “even when considering the most extreme adolescent fantasies”.
He told the Sueddeutsche Zeitung newspaper: “To reward such a masterly achievement with the use of 22 firefighters almost pains my soul.”
The sculpture had stood for 13 years without incident. Sueddeutsche Zeitung helpfully explained that “Tuebingen is a liberal university town, there is a Green mayor and a stone vagina, and no-one takes offence at such bold things.”
Tuebingen is a university town 19 miles south of Stuttgart in southwest Germany. 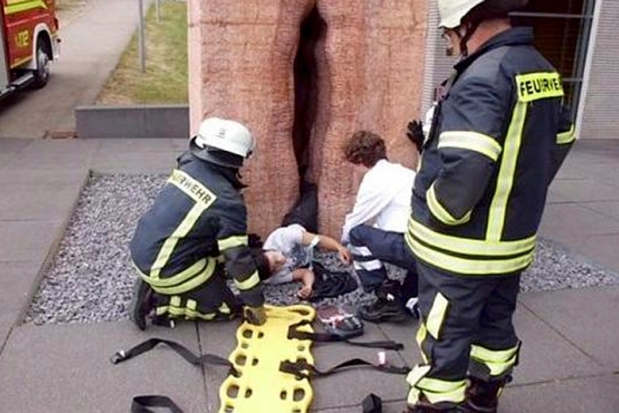 Joshua Slocum said:
a total of 22 firefighters in five vehicles attended the scene
Click to expand...

Proof German firemen have a sense of humour
If you think you know the answer then you don't really understand the problem.

Damn this censorship.
"It is never too late or too soon. It is when it is supposed to be." - Mitch Albom - The Time Keeper

I didn't know how bad my neighbour's paranoia was getting, until I started following him around.

Book Reviewer
A mong in a minge! Whatever next.

Why cant I buy a Canadian? And an apology
2