Apologies if this has been posted - i did look through the first few pages of the site. 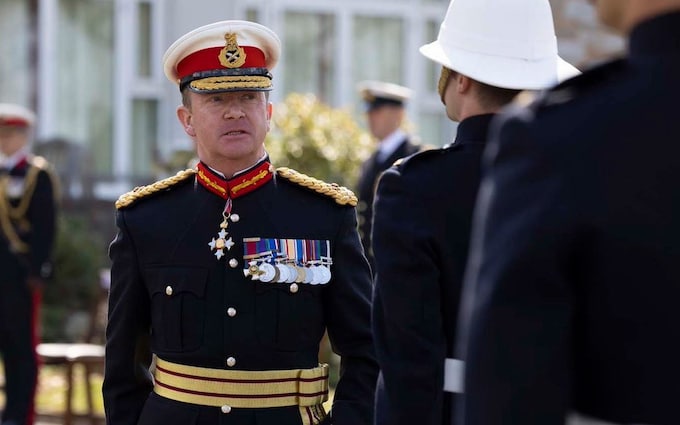 Major General Matthew Holmes during a ceremony in April to hand over the role of Commandant General Royal Marines CREDIT: News Scans/News Scans

The former head of the Royal Marines has been found dead as Royal Navy chiefs paid tribute to one of the “most senior and highly decorated Royal Marines”.
On Sunday night it was confirmed that Major General Matthew Holmes, who stood down as Commandant General Royal Marines in April, died on October 2.
Maj Gen Holmes, who commanded 42 Commando Royal Marines from 2006 to 2008 and was appointed as a Companion of the Distinguished Service Order for his leadership on operations in Afghanistan in 2007, was hailed by the First Sea Lord as a “dear friend to many”.
Admiral Sir Tony Radakin added that Maj Gen Holmes had been a personal close friend of his for over 20 years and that he had served the nation “and his beloved Corps with distinction for 33 years”.
He said: “He will be sorely missed by the Service and especially the Corps Family. But my thoughts, prayers and deepest sympathy are with Matt’s family. Their loss is the greatest and most painful: we will be there for them now and always.”


‘Once a marine, always a marine’​

The Ministry of Defence said that while the circumstances of Maj Gen Holmes’ death were being investigated it would be inappropriate to comment further, however it is understood that he took his own life.

The MoD said its “thoughts and sympathies are with his family and friends at this difficult time and they have our deepest and heartfelt condolences”.
Commandant General Royal Marines, Lieutenant General Rob Magowan, said his heart went out to his predecessor and his family. “We will honour him and all those closest to him,” he said.
“But I also think of you all. It matters not that he was a General, but it does that he is a Royal Marine. I remember and celebrate him, alongside all those who he is with now. We are one family, together, just as we learned, and as we trained, alongside each other at the Commando Training Centre. Once a marine, always a marine.”
Earlier this year The Telegraph reported that Maj Gen Holmes resisted the move to ‘double-hat’ the role of Commandant General Royal Marines – a two-star post – with another role.
Critics feared the lack of one senior person focused solely on the future direction and professional development of the Royal Marines would be detrimental to the Corps.
However, the First Sea Lord insisted on the change, arguing that the incumbent in future would be a three-star officer and thus able to influence Defence debate to the advantage of the Royal Marines.
At the time of the row, a defence source told the Telegraph Maj Gen Holmes’s scheduled move in April was part of the transformation of the service. He moved on 20 months into what is normally a three-year tenure.

RIP.
“Some people take offense like it's a limited time offer.”

I did read something about this last night but without any details. I hope that we can avoid speculation and gossip.
And Ye Shall Know the Truth and the Truth Shall Make You Free - John 8:32.

Rest in Peace sir. My sincere condolences to your family.
If you can’t be bothered to take precautions to avoid COVID-19 because you don’t have to, how many people may die because you gave it to them before you get to be a bit bothered?! This made me laugh. Officers don't run, it's undignified and it panics the men. Oh Yeah? You haven’t been to effing XMG!

I sincerely hope his death was a personal issue, not a disciplinary one.

Tragic news, may you rest in peace fine Sir.

CaptainRidiculous said:
I sincerely hope his death was a personal issue, not a disciplinary one.
Click to expand...

How about we don't speculate on the causes at all?

I don't think this is the time, or the place, to be doing so.
He/him.

Tappet said:
How about we don't speculate on the causes at all?

I don't think this is the time, or the place, to be doing so.
Click to expand...

No speculation needed as to the cause - he committed suicide.

As to why? Who knows? All that is plain is that it is a tragedy.
PRISTINAE VIRTUTIS MEMOR

CaptainRidiculous said:
I sincerely hope his death was a personal issue, not a disciplinary one.
Click to expand...

That makes it better does it?
Probably off my tits on prescription drugs. Treat what passes my lips with extreme prejudice.

Book Reviewer
A retired 1* colleague of mine committed suicide a few years back - tragic for all concerned and this case will be no different.
The stopped clock of The Belfast Telegraph seems to indicate the
time
Of the explosion - or was that last week's? Difficult to keep
track:
Everything's a bit askew, like the twisted pickets of the
security gate, the wreaths,
That approximate the spot where I'm told the night patrol
went through.

Condolences to his family, and respect for such a distinguished career.
R. I. P Sir.
'Hey Limedogs, while youse are over here, your wives are getting shagged...' 'Yeah, and while we're here so are yours!'
R

Condolences to family and friends. A Royal, he served his country well, in a time too short.

What was he wearing?

Provost said:
What was he wearing?
Click to expand...

Is that an early bid for his boots?
For Flag & Empire !

Provost said:
What was he wearing?
Click to expand...

No idea but I'm waiting for the media to link him to Deepcut at some point.
The stopped clock of The Belfast Telegraph seems to indicate the
time
Of the explosion - or was that last week's? Difficult to keep
track:
Everything's a bit askew, like the twisted pickets of the
security gate, the wreaths,
That approximate the spot where I'm told the night patrol
went through.

Bubbles_Barker said:
No idea but I'm waiting for the gutter comic media to link him to Deepcut at some point.
Click to expand...

Kit Reviewer
Book Reviewer
Reviews Editor
So sad. So young.
And this you can see is the bolt. The purpose of this
Is to open the breech, as you see. We can slide it
Rapidly backwards and forwards: we call this
Easing the spring. And rapidly backwards and forwards
The early bees are assaulting and fumbling the flowers:
They call it easing the Spring.
They call it easing the Spring: it is perfectly easy
If you have any strength in your thumb: like the bolt,
And the breech, and the cocking-piece, and the point of balance,
Which in our case we have not got; and the almond-blossom
Silent in all of the gardens and the bees going backwards and forwards,
For today we have naming of parts.

Kit Reviewer
Book Reviewer
Shocking news. Whatever his reason(s) it shows that none of us are immune.

I suspect that most of us have been surprised that some senior leaders, military and civilian, have spoken recently about their own mental health issues. Perhaps we need more of that.
A DEAD STATESMAN

Do the Senior Service have an equivalent to AGAI 110? Several ‘red flags’ emerging here: Removed from post 20 months into a three year posting, going through a divorce, transitioning out of the Services….. Makes one wonder who should have called the Risk Conference?
PRISTINAE VIRTUTIS MEMOR

Why does an ex-RM Commando Paul Farthing feel it's important his staff should be evacuated?
117 118 119