For the duration of the war, the workhorse of the motorized artillery units was a derivative of the most produced tracked platform in the US Army, the M4 Sherman tank. In 1941, US Army observers noticed that more firepower would be needed to support armored operations. Before experiments were made with the Sherman in 1944 with a 105 mm (4.13 in) howitzer in the turret, building SPGs was the easiest way to achieve this, as there were few constraints on the gun carried. The T19 half-tracks were developed for this task, but still lacked protection and off-road capabilities. Eventually, in 1941, the M3 Lee chassis was chosen, leading to a converted prototype, the T32.

From prototype to production
The T32 was modified with an open-topped superstructure, mounting a 105 mm (4.13 in) howitzer. This standard M2 howitzer was just entering service when the Pacific War started, and proved to a be highly dependable piece of ordinance, being produced from 1941 to 1953 and used until the 1970s. With a -5° to +66° elevation, its practical range was 12,325 yards (11,270 meters). In practice, maximum elevation had to be reduced to 35° when vehicle-borne to keep a low silhouette. Accuracy was good, and its HE rounds (105x372R) were noted for their excellent explosive power. But due to the recoil, especially in high elevation, the breech mechanism needed space.

Due to the high transmission of the chassis, the floor was high and the superstructure tall, with flat armored walls to protect the open crew compartment, which left the crew vulnerable from above and the rear. Ammunition was stockpiled inside storage boxes and into the hull (24 rounds). During trials, it was apparent that defensive armament was needed, and provisions were made for an M2 Browning machine gun. Its position was changed and eventually fixed into a front left tower. This gave an excellent arc of fire, while the howitzer was placed offset to the right. This characteristic was noted by the British commission, which named the new vehicle “Priest”, due to the pulpit-like MG emplacement. Charged to buy the new tank, they placed an order for 4400 to be delivered in 1943 (never achieved). The new vehicle was accepted for service in February 1942 as the 105 mm Self Propelled Gun, and production started immediately at the American Locomotive Company. It was joined in 1942 by Pressed Steel Car and later by Federal Machine and Welder.

Modifications and variants
The need to increase the supply of ammunition carried appeared quickly. Engineers came with a response, cramming extra storage in the walls (7 left and 5 right), while the remainder 33 rounds were stockpiled into the floor plates. This was achieved early on the production line in March 1942. Later, during production, the chassis was shifted from the M3 to the M4 for standardization. It was characterized by the M4’s three-piece housing, single-piece casting and reworked suspension. Some British vehicles received radios, sacrificing rounds storage and reverting to 24 shells being carried.

The M7B1 (1943)
This upgraded version was based on the M4A3 Sherman chassis and standardized in September 1943, 826 were built by Pressed Steel Car. They were characterized by their Ford GAA V-8 (450 hp) engine, new suspensions roadwheels and idlers, and side skirts, with many internal modifications.

The M7B2 (1952)
During the Korean war, the need to restore the elevation to the original 65° resurfaced. This was achieved by modifying the mount completely and giving it an extra shield, with some traverse. The heavy MG mount was also raised to give a full 360° firing arc. 127 were built by Federal Machine and Welder.

British “Defrocked Priest”
Some M7s in British service were converted as improvised armored personnel carriers for Operation Goodwood (June 1944), in order to capture Caen and achieve the final breakout from Normandy.

Kangaroo
A Canadian version of the M7 converted as a dedicated APC, between October 1944 and April 1945. This was a more thoroughly made conversion driven by experience, and in this roomier version, the vehicle could carry 20 infantrymen. 102 in all were so converted and used by the British, New Zealanders and Australians as well, both in Northern Europe and Italy. 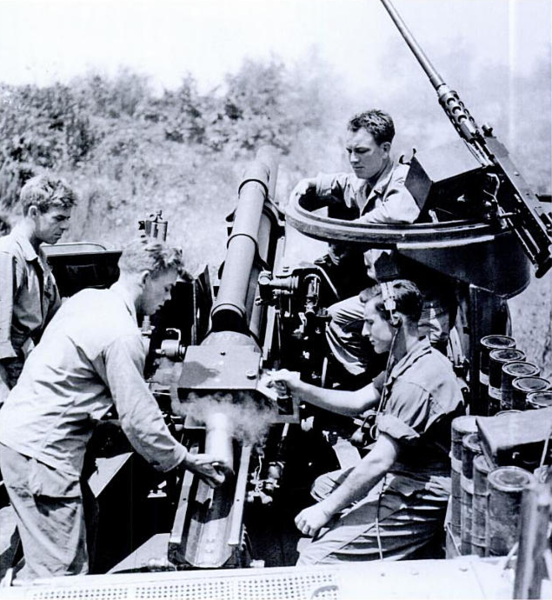 The M7B1 self-propelled 9.75 inch Chemical Mortar Prototype
The PWD 9.75 inch Chemical Mortar was “marketed” to the U.S. 7th Army in trials at Benny, France in February 1945. The weapon was developed by the Petroleum Warfare Department and fired incendiary shells of White Phosphorus hence the word ‘chemical’ in the name. It was earlier trialled on a Valentine chassis. It was mounted on three different M7B1 HMC chassis for testing (not M7 chassis). It was not accepted by the Army as it was deemed unsuitable for service. 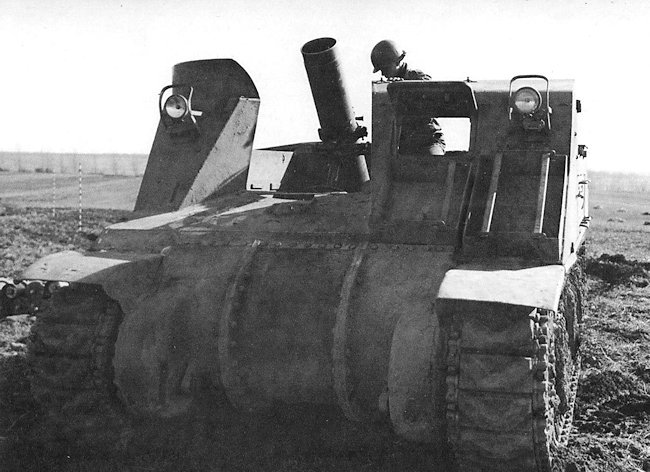 The M7 Priest in action
Through Lend-Lease, the first shipments of M7 were sent to the British Army operating in North Africa. The very first batch of 90 was found engaged in the second battle of El Alamein, in October 1942, side by side with the British-built 25 pdr Bishops. They served in increasing numbers with the VIIIth army until the end of the campaign and proved invaluable in the mountainous and hilly terrain of Sicily and Italy. The only limitation found by the British was that this was a pure-US vehicle, with US weapons and ordinance, which complicated the logistics chain of supply. In 1943, more and more British-standard, Canadian-built Sextons were introduced. M7s were also massively engaged in Normandy and throughout the western European campaign. None were sent to the Soviet Union.

M7s were also employed in growing numbers in the Pacific theater. For example, they took a very active role during the Philippine campaign. British vehicles were also engaged in the Burma campaign. They proved instrumental during the Battle of Meiktila and the advance on Rangoon in 1945. Tactically, each US division had three HMC battalions of M7s, providing an excellent level of mobile artillery support. The M7 was found reliable enough to serve long after WW2, throughout the Korean war. The B2 variant was still in reserve in the early 1960s, and many are preserved today in museums and private collections.

Standardized M7 based on the M4 Sherman chassis, Tunisia, January 1943. 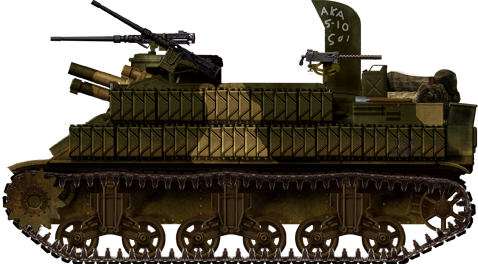 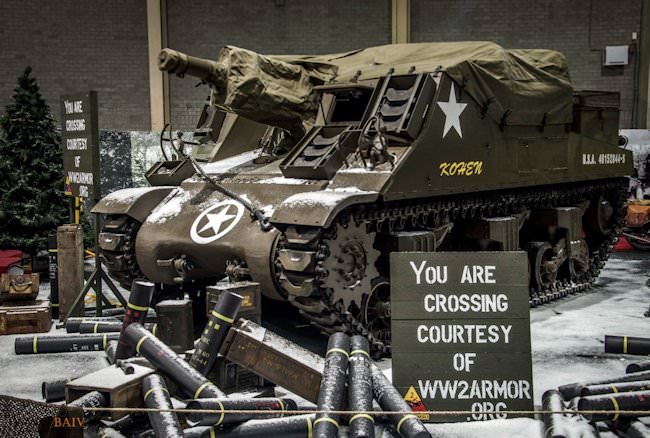 Notice the bad weather tarpaulin that covered the gun and crew area on this restored M7 Priest.
All mushrooms are edible, some however, only once!

Here's one in Burma, circa 1945, belonging to 18th Field Regt RA (the only Commonwealth SP Artillery unit in the theatre, though Stilwell's Chinese had a battery in northern Burma). Note the XIVth Army badge on the transmission housing: 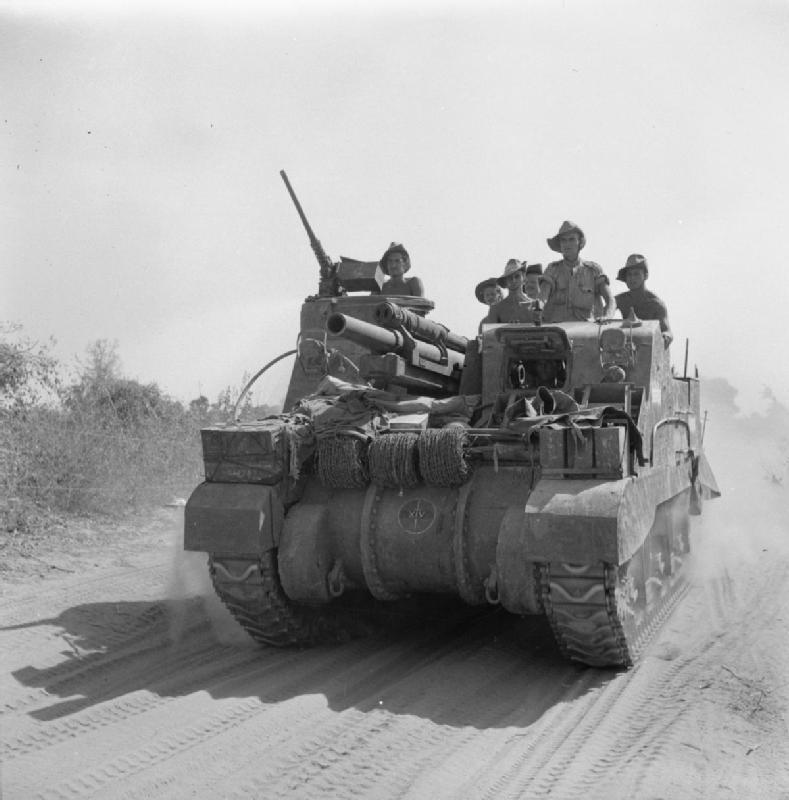 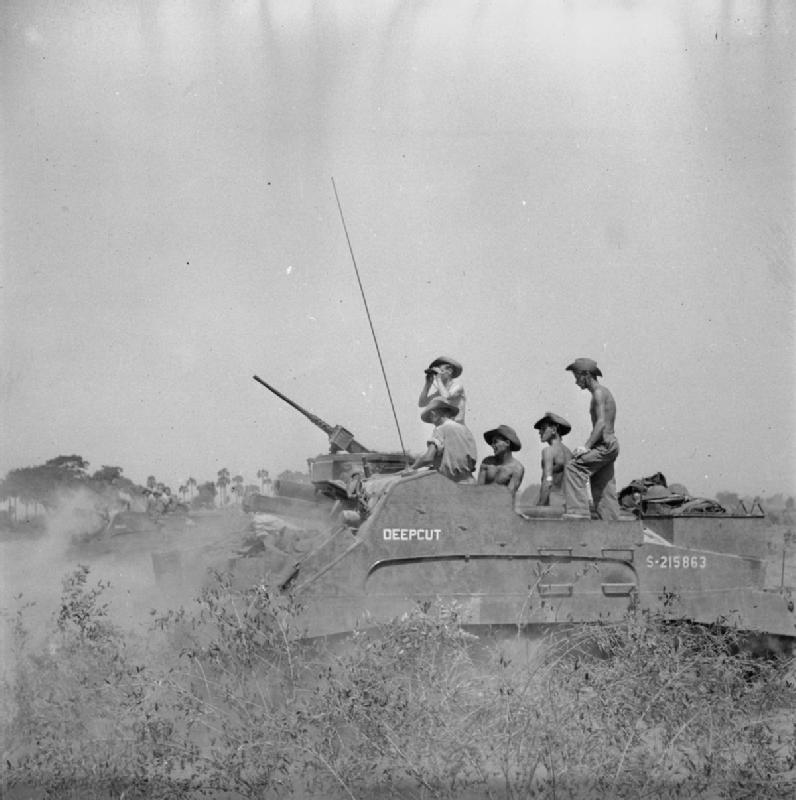 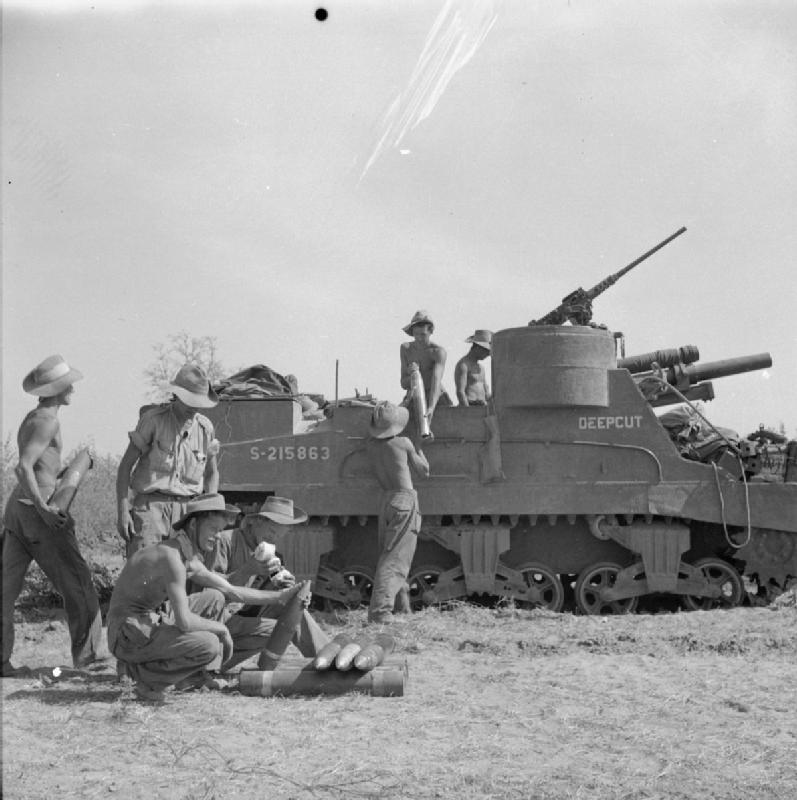 They were even used by the newly formed German Bundeswehr,there is one on display at the German tank museum in Munster.